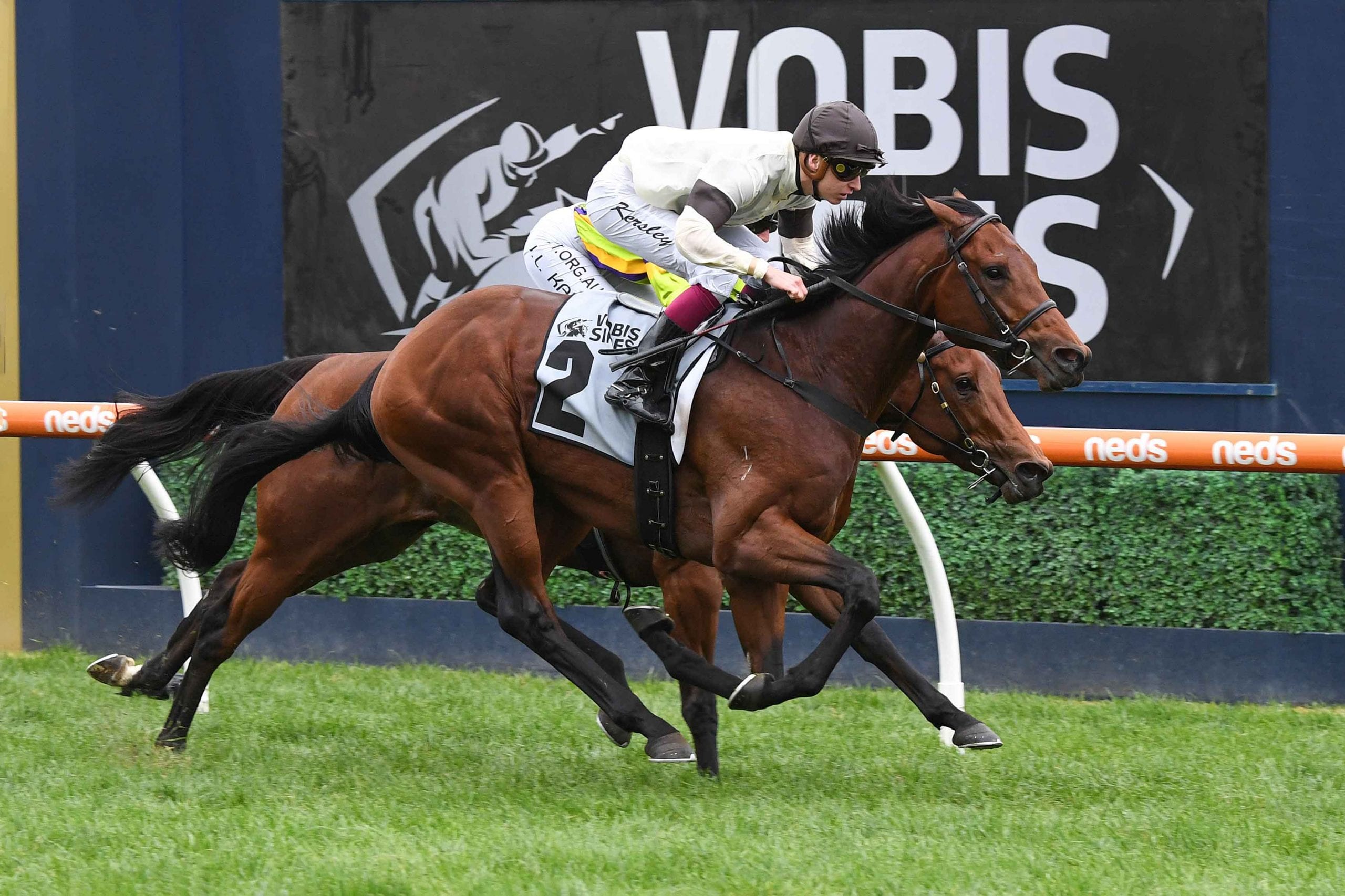 During his time in racing – a lifetime – Ballarat trainer, Matt Cumani, has seen his share of highs and lows.

He well remembers the day at Epsom, as a teenager, cheering on High Rise as the colt won the 1998 Derby: trained by his father Luca.

On Sunday evening, Cumani was heading back to his Ballarat stables with two unplaced runners from the meeting at Terang. Swings and roundabouts.

However, on Saturday at Caulfield, Cumani notched up the biggest win of his own, short training career when Khoekhoe (pronounced kway-kway) produced a blinder to capture the $855,000 The Showdown over 1200m.

Sitting midfield turning for home, Khoekhoe flew over the final stages to haul in race favourite, River Night, right on the wire and score by a head.

Stirring stuff. It was only a little over 12 months ago that Cumani had purchased Khoekhoe for $50,000, from the Hollylodge Thoroughbreds draft, at the Inglis Melbourne Premier Yearling Sale. Three runs and two wins later, Khoekhoe has banked over $484,300 for connections.

“That win in the Showdown was truly something special,” Cumani enthused. “It’s not just about me, or the owners, but the whole crew as well. I’ve got 65 in work and any win, regardless of venue, is a huge team effort.”

Training the winner of a near million dollar 2YO race has special significance for Cumani who only took out his trainers’ licence in January 2016.

“We’ve got a reputation for training good middle distance and staying types like Etah James, who won a (Group Three) Lord Reims (2600m) and (Listed) Pakenham Cup (2500m) for me, while saddling up a horse like Grey Lion to finish second in the (Listed) Geelong Cup before running in the Melbourne Cup was something you’ll never forget,” Cumani points out. “However, to train a good 2YO like Khoekhoe – one that you purchased at sale and has basically been with you every step of the way – is truly special.

“I really didn’t expect him to be doing what he’s doing this early and he has the potential to be my best horse yet.”

Fortunately, Cumani was able to ‘spread the love’ and sold shares in Khoekhoe to a diverse (and grateful) mix of existing and new clients.

“Don and Kerry McMillan have a few horses with me and when they came down to the stable for a look after the colt had come from the sales, Kerrie wasn’t keen to get another horse, but we took Don off to one side and he took a share. I don’t think Kerry minds now though,” Cumani adds with a laugh. “Stuart and Anna Padman have stables at Murray Bridge and every time we take a horse across to South Australia we keep them there and they never charge us rent. So, we gave them five percent in Khoekhoe in recognition for everything they’ve done and after a while, Stuart actually came back and bought a further five percent.”

Cumani was impressed with Khoekhoe from the moment he laid eyes on the colt but is quick to credit (Aushorse CEO) Tom Reilly with ‘finding’ him.

“He (Khoekhoe) wasn’t actually on my list, but I’ve been great mates with Tom for a long time and he suggested I take a look at the ‘Turffontein colt’,” Cumani reveals. “Khoekhoe has a fantastic walk on him and is beautifully athletic. That’s the most important thing I look for at the sales. If they look athletic and walk like an athlete, then surely there’s more of a chance they will be athletic. I thought he looked pretty good around 3.30pm on Saturday.”

A constant source of quality winners since the 1990s and helmed for the last four years by the founder’s son, Dan Nevill, Hollylodge Thoroughbreds offers around 35 youngsters annually at Melbourne sales (including 18 for the re-scheduled Inglis Melbourne Gold Yearling Sale in mid July).

However, just as Khoekhoe’s Showdown was a defining moment for Cumani and co., the result also meant a great deal to Nevill.

“He was outstanding from day one and I mean that quite literally as we foaled Khoekhoe down on farm and let him grow out before sending him to (breeder) Susan Keating’s property,” Nevill explains. “He then came back to us for the yearling prep and just absolutely thrived. Khoekhoe was a big, rangy type but had great balance.

“I knew he’d catch the eye of a good judge and congratulations to Matt who is a top young trainer, while it’s also fantastic for Susan who is such a terrific supporter of the farm. I said to Matt straight after the colt was knocked down that he got a very cheap horse and I’m fairly sure he agrees with me!”

Khoekhoe is by Blue Gum Farm’s Group One winning sprinter, Turffontein from the Cape Cross mare, Walvis Bay, and herein lies yet another bargain, given that Susan Keating purchased Walvis Bay for only $19,000 at the 2009 Inglis Easter Broodmare Sale.

There is not much in the way of black type for the first four dams and despite having years off in 2013 in 2018, Walvis Bay has been a broodmare owner’s dream with seven runners, seven winners.

Walvis Bay’s Reward For Effort colt was sold by Hollylodge for $28,000 at this year’s Inglis Melbourne Premier Yearling Sale, while Nevill confirms the mare is in foal to Spendthrift stallion, Overshare.

And just to continue the ‘bargain’ theme surrounding Khoekhoe, Blue Gum Farm announced its 2020 fees last week with Turffontein due to stand at $6,600, while barnmate, Manhattan Rain (sire of Group One winners She Will Reign and Whisky Baron), stands at $13,200.

HOOFNOTE: You could be forgiven for having a tough time getting your tongue around Khoekhoe, but full marks to the ownership group for its creativity.

Walvis Bay is named after the city (also known as Whale Bay) on the coast of Namibia in South Africa, while Turffontein – by Johannesburg – gets his moniker from the famous South African racecourse. Yes, the one in Johannesburg.

Talk about Out Of Africa!