Kinky Bunch Ready To Lift The Boom On Blue Diamond 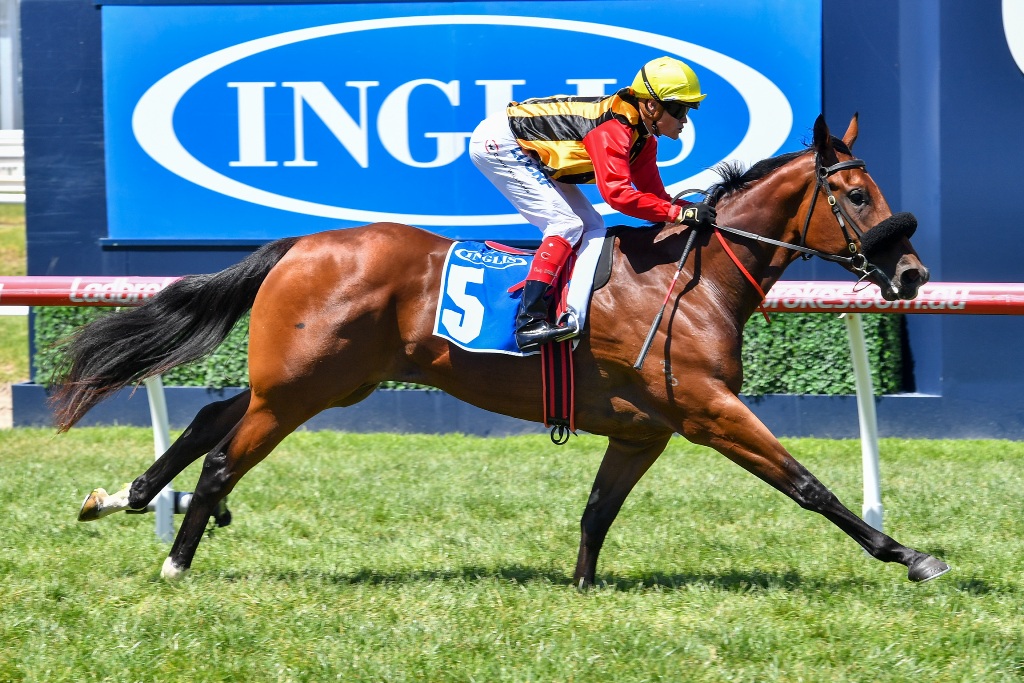 Making her debut on Saturday in the $250,000 Inglis Premier over 1200m at Caulfield, Kinky Boom lived right up to the pre-race hype, largely on the back of an 8.5 length barrier trial romp at Morphettville at the end of January.

Within minutes of Kinky Boom’s comfortable score and inevitable elevation to the forefront of Group One Blue Diamond Stakes betting, McEvoy was telling all and sundry how he had “found” the filly.

“I was at Oaklands Junction (for the 2017 Inglis Melbourne Premier Yearling Sale) and Jenny McAlpine came up to me and ‘tugged my coat’, telling me I just had to look at this wonderful Spirit of Boom filly,” McEvoy recalls. “I told her I didn’t have any money left but Jenny and (brother) Scott are pretty good when it comes to twisting arms!”

Jenny McAlpine, the Australian rep for Tattersalls UK and a public relations consultant to Lindsay Park Racing and Queensland’s Eureka Stud remembers that the filly was proving to be a “hard sell”.

“Scott wanted to promote Spirit of Boom outside of Queensland and get them into interstate stables, so he decided to send down some of his yearlings to Melbourne and placed Kinky Boom with Phoenix Broodmare Farm just before the sale,” McAlpine explains. “Trouble was, they were from the first crop of Spirit of Boom and as a sire he wasn’t that well known in Melbourne.

“Scott had wisely qualified them for QTIS and Super VOBIS – the latter through the Breedback category – but they were in the second sale on the last day and I was having trouble getting trainers to get excited about them.

“I remember asking Troy Corstens if he would come and have a look at the Spirit of Booms and he told me ‘I just don’t think I could on-sell a Spirit of Boom in Melbourne!’

“Troy sent me a message on Saturday night which read, ‘well, that was about the stupidest thing I’ve ever said’,” McAlpine adds with a laugh.

McAlpine then sought out McEvoy. The pair, great friends, worked closely together for decades, initially via Colin Hayes and more recently through David Hayes.

“I kept on saying to Mac that we have this ‘gorgeous filly’ and, seeing as she was so late in the sale, he kept replying that he had no money left,” McAlpine points out. “Anyway, he ended up buying her for $40,000 after she was passed in, but more or less indicated he was doing me a favour.

“After Saturday, I think it’s me that’s done him the favour.”

A dual Group One winner both bred and raced by Eureka Stud, Spirit of Boom is off to what many consider to be an unparalleled start to his stud career with nine individual winners – four of them stakes winners – from his first crop of racing age.

Meanwhile, Kinky Boom is out of the Encosta de Lago mare, Kinka Rhode, a $150,000 purchase at the 2005 Inglis Australian Easter Yearling Sale. Trained by Tony Noonan, Kinka Rhode was a Sandown winner of four races before being sent to stud where she produced two foals in four years.

Eventually, Kinka Rhode – a daughter of Kiwi stakes winner Centennial – was despatched as a dry mare to the 2014 Inglis Scone Thoroughbred Sale where she was knocked down for $600. Yep, $600!

Harry McAlpine, a bloodstock consultant for Inglis, was working for the auction house’s online sales division – bloodstock.com.au – at the time.

“Garry Cuddy (now Spendthrift Australia General Manager) said to me that mare (Kinka Rhode) will probably go fairly cheaply and would be good match up for Spirit of Boom who was retiring to stud that spring,” McAlpine points out. “He was right on both counts, but we didn’t think she’d be that cheap.

“Also, Clarry Conners had a filly from Kinka Rhode called Tanita, named after Tanita Vella, who was working in the Inglis office, and the filly was evidently very promising: albeit usually last out of the gates and flashing home too late.

“Maybe because of the Tanita connection, I started showing the foal photos of Kinky Boom around the office, which generated quite a bit of interest, and I talked dad (Scott) into selling her at an Inglis sale.”

Like Jenny, Harry was doing his due diligence at the sales ground, trying to encourage prospective buyers to look at the filly.

“I told a number of trainers that we had 20% sold right off the bat and that’s exactly what happened,” McAlpine adds. “In the end, 15 people took shares in the 20%, quite a few of them are on the Inglis team, but at least 10 of the 15 are first time owners.

“A few of them are housemates too, which means I’m pretty popular at home for the time being, while several are also overseas and were cheering on from afar.”

A half sister to Kinky Boom, by Turffontein, will be offered (Lot 81) under the Eureka Stud banner at the 2018 Adelaide Magic Millions Yearling Sale on 13 March … just 17 days after the $1.5 million Blue Diamond.

HOOFNOTE: Victoria’s Phoenix Broodmare Farm, which sold Kinky Boom on behalf of Eureka Stud, is also a shareholder in the filly – much to the delight of principals Damien Gleeson and Deb Gifford.

“We don’t race that many horses, but she was such a lovely filly that we decided to keep 10%,” Gleeson reveals. “I had a share in Miss Nymeria who ran third in the Blue Diamond Prelude and then eighth in the 2016 Blue Diamond, but she unfortunately broke a shoulder and died after only three runs.

“We’ve had a long association with Eureka and actually walk on their mares to Victorian farms. So, the first time I ever laid eyes on Kinky Boom she was just three weeks old and fell in love with her.

“Deb and I were looking at her parade videos from the sale and were there at Caulfield on Saturday and she hasn’t changed a bit. Doesn’t miss a beat that filly.”

Nor do Gleeson and Gifford. While many of the Kinky Boom owners – reportedly – celebrated well into the night, Team Phoenix was back to the barn at 6.30 on Sunday morning, prepping 12 youngsters for the Inglis Melbourne Premier and a further seven for the Adelaide Magic Millions.