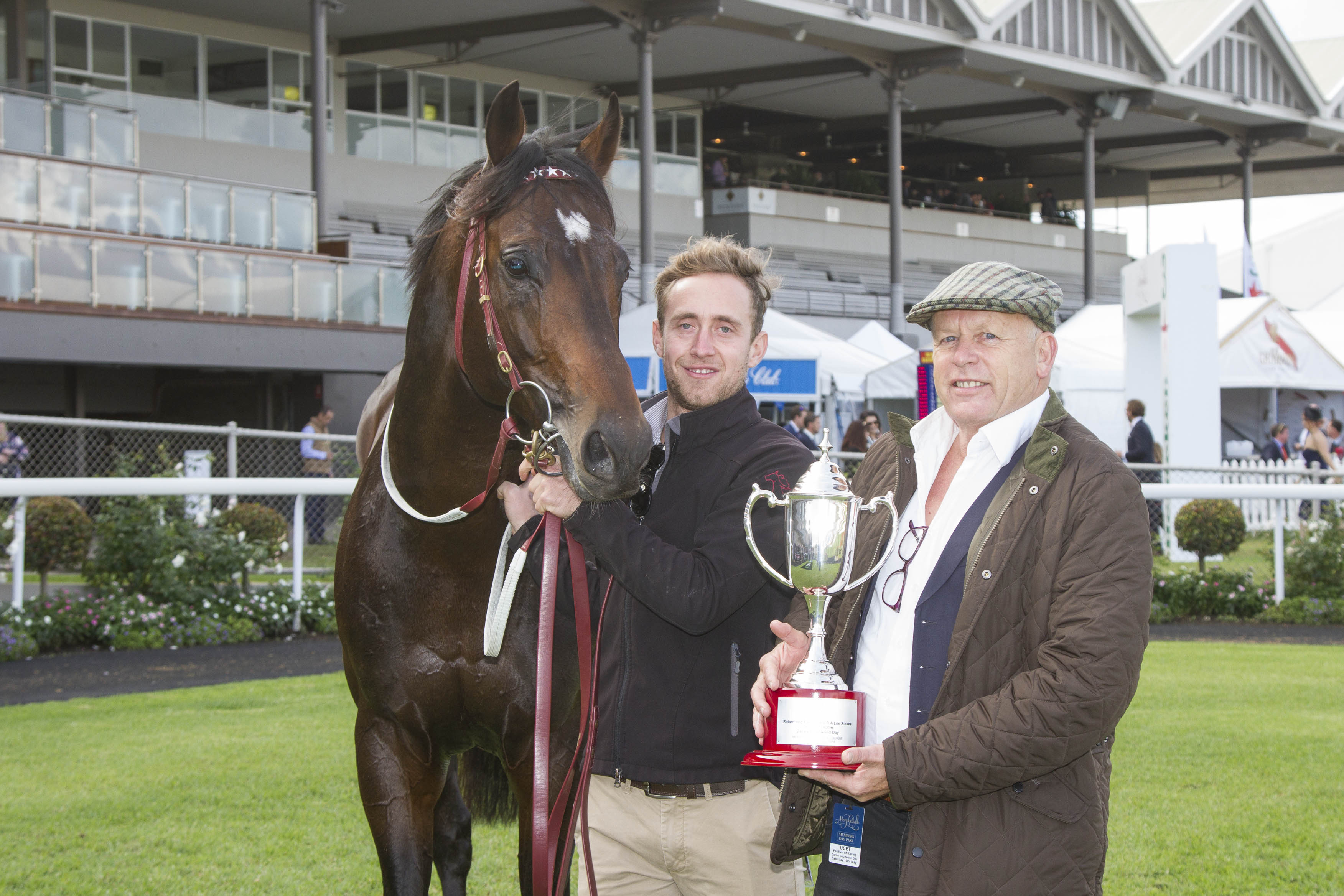 Clive Smith was in the Morphettville mounting yard on Saturday, anxiously watching as his horse – Land Of Plenty – paraded before the Group Three Robert & Fay Gerard RA Lee Stakes over 1600m.

The ever-laidback trainer Darren Weir asked Smith if he’d ever won a Group race before and, when he shook his head, Weir simply said: “well, you’re about to!”

Settling near the tail of the field in the Lee Stakes, Land Of Plenty moved up strongly turning for home and hit the lead with 100m to go. Despite getting plenty of attention in the closing stages, Land of Plenty fought back strongly to post a narrow win, much to Smith’s delight.

The Lee Stakes was Land of Plenty’s twentieth outing – for four wins, six placings and $435,230 in stakes – and, despite a second to Hey Doc in the Group Two Stutt Stakes, plus thirds in the Colin Hayes Stakes, Bobbie Lewis Plate and Anniversary Vase, this was the 4YO’s first black type victory.

It’s been some journey for Smith and his Land of Plenty.

With a background in information technology and currently developing software for the thoroughbred industry, Smith has always had a keen interest in horses: initially taking a 10% share in a $10,000 horse back in the mid-1990s.

Taking it up a notch or three, Smith purchased a small property at Strath Creek in Victoria some five years ago, with the aim to spell his racing and breeding interests.

The farm currently plays host to five broodmares, including the dam of recent Group Three winner Moss Trip as well as a close relation to Group One winner Tavago.

But it’s Land Of Plenty, not surprisingly, which holds centre stage for Team Smith.

“It’s been quite the journey,” Smith points out.

“I really liked the look of the Stratum colt from Dancing at the (2015 Inglis Australian) Easter Yearling Sale and, after he was initially passed in, we got him for $80,000.

“I’m a Men At Work fan and utilised some of the lyrics from ‘Down Under’ when naming him Land Of Plenty.

“He showed plenty of ability from early on and, consequently, was subject to numerous offers from Hong Kong. However, I wasn’t keen to sell him.

“After completing his 3YO campaign, one of the owners decided to put his 30% ownership up for sale at last year’s Inglis Chairman’s Sale of Racing Prospects.

“By that time Land Of Plenty had a couple of stakes placings and run in several Group Ones, but I managed to buy the 30% share at the Chairman’s for just $32,000.”

Although Land Of Plenty would mix his form in the spring, the entire’s five runs this campaign have produced three wins and a stakes placing.

Depending on how the horse progresses over the next few days, connections may opt for a tilt at the $1.5 million Group One UBET Stradbroke Handicap over 1350m at Doomben on 9 June, but most likely the connections will look to campaign Land Of Plenty throughout the Melbourne spring.

“I was under a lot of pressure to sell him early on, but it’s just so much fun racing the horse. My dad is 91 years old and starting to feel the effects of early onset Alzheimer’s and dementia, but he gets such a buzz out of the horse racing.

“What’s more, if he continues to progress, Land Of Plenty is going to make a lovely stallion. Not only is he a real standout looks wise, he’s got a wonderful temperament. He’s been in our paddock numerous times and nothing ever fazes him.

“That was Stratum’s fortieth stakes winner on Saturday, while Land Of Plenty is out of a North American Group Two winner in Dancing, who is closely related to sires like Suave Dancer and Nine Carat, along with 3-time Group One winner, Hartnell.

Meanwhile the winner’s breeders, the Esplin family, might want to consider changing the name of their farm – Tartan Fields – to ‘Land Of Plenty’.

The Kulnura based property inland from the New South Wales central coast has produced four stakes winners in the last twelve months alone: a fair cop from a base of just 30 broodmares.

“We only foaled down fifteen that year at Kulnura and ended up with three stakes winners.”

Esplin remembers Land Of Plenty well and was surprised that the horse was originally passed in.

“He’s a stunning type actually, but the mare – Dancing – hadn’t probably done much up until then,” Esplin explains.
“Since that sale though, Dancing has been represented by a Street Cry stakes winner, Macduff, in South Africa, so Saturday’s win gives the mare two black type winners.

“Until last year, five of Dancing’s six foals had been male and we usually sell all our colts. However, Dancing produced a lovely Office Bearer filly last spring and she was subsequently covered by Charge Forward. We tested her in foal and she’s carrying another filly.

“So, it appears as if we’ll have quite a few from that family in the years ahead.”