Lightning to strike twice (or thrice) in Aushorse Singapore series? 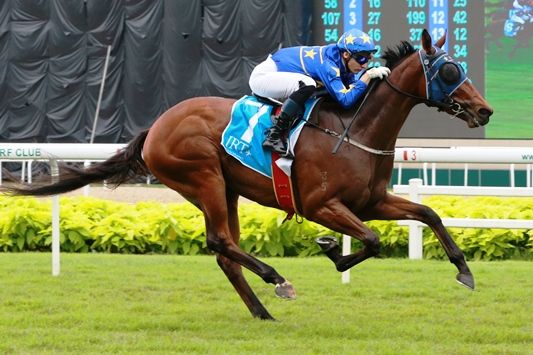 The IRT was the third leg of the Golden Horseshoe series and carried a bonus of S$10,000 to the winner given that Lim’s Lightning is Australian-bred and went through an Australian auction ring (the 2017 Magic Millions Gold Coast 2YOs In Training Sale for $50,000).

The fourth leg is to be staged on 29 June and leads directly into the S$325,000 Golden Horseshoe final 12 days later.

Burridge is undecided as to whether Lim’s Lightning, who was having only his second start in the IRT after running third over 1200m in Singapore on 26 May, will back up in the Inglis or keep his powder dry for the Final.

“He (Lim’s Lightning) pulled up well after the race, but we’ll make a decision closer to the date as to whether he runs again before the Final,” Burridge said of the Lim’s Stable owned 2YO.

Despite jumping from barrier 13 in the IRT and getting trapped behind a wall of horses turning for home, Lim’s Lightning lived right up to his name with a blistering performance over the closing stages to win by four lengths.

“When barrier 13 came up, you just have to hope for luck,” Burridge adds. “It’s always good to educate these young horses and he probably ran a little better than we thought.”

“Lim’s Lightning is one of six horses that were purchased by Mick, on behalf of Lim’s Stable, at last year’s Magic Millions Gold Coast 2YOs in Training Sale,” Burridge explains.

“Two went to Dan Meagher, two to Lee Freedman and two to me.

“I got a More Than Ready as well who has been tipped out for a while, along with Lim’s Lightning (a Lope de Vega from Wayne’s Gold who was purchased for $50,000).

“He (Lim’s Lightning) was pretty forward and has really impressed me and, if he runs like he did on Friday, he’d have to be in with a very good chance in the Final.”

Burridge, not surprisingly, is a huge fan of the Golden Horseshoe.

“It’s a great series with terrific prizemoney. I reckon they pulled the right rein a couple of years ago by putting it back to later in the year and it’s paying off with some quality fields. Hopefully our bloke will be good enough to win the big Aushorse Final.”

One of over 300 winners (40 stakes winners) for Shamardal stallion, Lope de Vega, Lim’s Lightning is out of the Group Two placed Golden Snake mare, Wayne’s Gold.

Lim’s Lightning was bred and raised in Queensland by Eagle Farm trainer, Lynn Tipper, who has four in work and four mares at her Bridgeman Downs, some 30 minutes from the track.

“Ironically, I knew Mick Dittman’s wife Maureen from pony club years and years ago and we eventually purchased the property at Bridgeman Downs from Mick,” Tipper explains.

“Mick clearly liked what he saw at the sale because Lim’s Lightning was a difficult bloke to handle early on but has obviously settled down over there in Singapore. That was a very good win on Friday.

“I sold another Lope de Vega at the sale too and she’s called Lope For Joya and is trained at Eagle Farm by Les Ross. Lope For Joya has won and run third from only two starts as well. It’s the same family as Lim’s Lightning, as are all my broodmares for that matter.”

Indeed, Tipper has had a long association with the family, purchasing Lim’s Lightning’s granddam, the stakes placed Lunchtime mare Whiff, from the Tait family over 25 years ago.

Whiff would produce 13 winners from 15 to race – all but two for the Tippers – with one of her daughters, Thermopylae, producing Vipera Gold, a Brisbane stakes winner who Lynn bred, raced and trained.

Tipper would also breed and race (although Greg Eurell would train) Lim’s Lightning’s dam, Wayne’s Gold, the winner of four and a neck third in the 2008 Group Two Sunline Stakes at Moonee Valley.

“Wayne’s Gold has had her share of problems over the years, missing a couple of times and two of her foals dying, but her only three runners – Hidden Gold (5 wins), Verily (2 wins) and Lim’s Lightning – have all won and I’ve got a Rothesay filly out of her that’s been broken in and is heading to my stables this week.”