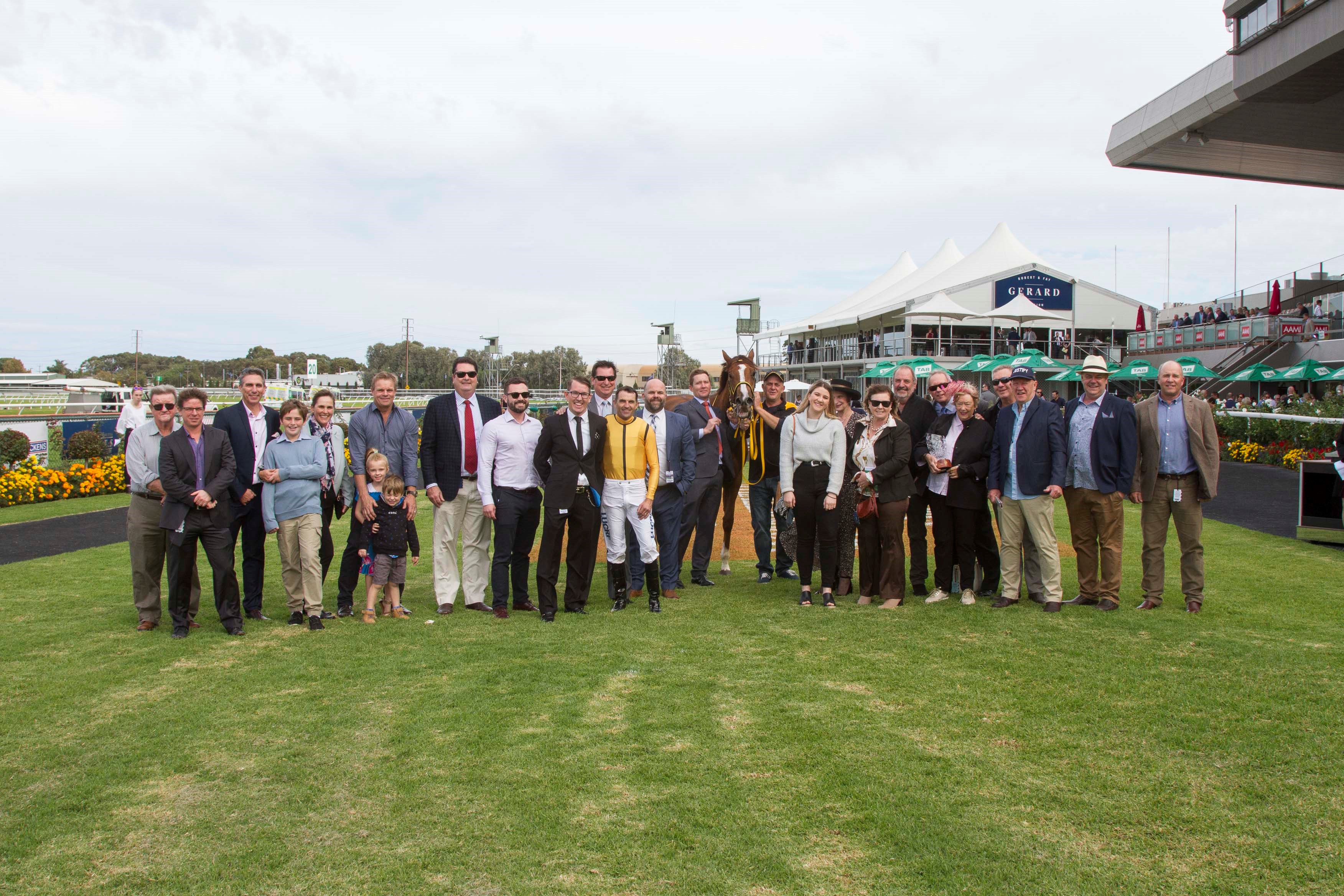 Connections of Li’l Kontra after her win in the Group Three National Stakes at Morphettville (AtkinsPhotography.com.au)

It would be something of an understatement to call the Ryan Balfour trained, Li’l Kontra, ‘gutsy’.

After all, Li’l Kontra’s victory in Saturday’s M&J Chickens National Stakes over 1200m at Morphettville was her ninth outing since December: and she’s only a 2YO.

That said, the way Li’l Kontra hit the mark on Saturday defies any ‘stick’ about the youngster being overraced.

The National would be Li’l Kontra’s second stakes success after capturing the Listed Dequetteville Stakes in April, with her black type wins bookending a third in the Listed Queen Adelaide Stakes earlier this month.

“She (Li’l Kontra) is an amazing filly,” Ryan Balfour’s racing manager, Matthew Kelly, enthused. “Ryan trains the full brother, Cashed – and the half sister Embecee Lil (5 wins) too for that matter.

“When we went to have a look at Li’l Kontra in the paddock before she went to the sale, Ryan commented then about how much she looked like Cashed who has won eight and was runnerup in the (Group Two) Schillaci Stakes. He’s still racing as a 7YO but he had quite a few starts in his first campaign and is still going strong. Spitting images in fact, just five years apart.

“Ryan reckons the key to it is to give our horses quite a few ‘mini’ breaks while they are in work: for instance, we often send them up to Willow Grove Stud on the Sunday morning before bringing them back into the stable on Monday night.”

Balfour is the trainer of one of South Australia’s most popular horses in 6YO, Balf’s Choice – named after his late father, David and winner of the Balaklava and Seymour Cups – but is rapidly building a solid cadre of juvenile talent.

“Ryan was the leading Adelaide based trainer in 2017/18, but he didn’t even have a 2YO runner last season,” Kelly explains. “However, there’s been something of a changing of the guard and we’ve currently got 40 two year olds and yearlings in the stable.”

Kelly confesses to be feeling a tad relieved after Li’l Kontra’s win on Saturday: “I reckon there were about 30 of the owners there at Morphettville and they’re mostly local and all vocal!

“We look after existing clients and, while there was a lot of interest in the filly after purchasing her for $110,000 from last year’s (Adelaide) Magic Millions, we gave first option to exisiting clients. Hence, most of the owners in Cashed are in Li’l Kontra too.”

One of them is long-time stable client, Justin Coleman, who bred the filly and astutely retained a share.

“Actually, Ryan is very familiar with the family as his dad, David, trained Li’l Kontra’s mum, Li’l Cashy who won nine races, along with her half sister, Cashkalani, the winner of six and placed in the Listed Queen Adelaide Stakes.”

Meanwhile, Li’l Kontra’s ‘fortitude’ comes as little surprise to Roslyn Day who was tasked with selling the filly through her Rosden Park draft in Adelaide.

“She (Li’l Kontra) was a big, strong filly … very laidback,” Day recalls. “She was pretty robust so it’s no wonder she has kept up for so long. Still, a great training effort from Ryan.”

Around horses for most of her life, Day shifted to Rosden Park at Wellington in 2015 and preps around 20 yearlings annually for the Adelaide and Melbourne sales.

(Rosden Park hangs out its shingle at one of South Australia’s most famous properties, previously operating as Paumah Stud and, in more recent times, the Liston family’s Lakewood Stud).

Heading into last year’s auction, Day believed the Krupt filly would be a major attraction: “She was busy before the sale and throughout inspections,” Day adds. “Huge interest in her.”

A Group Two winning son of Flying Spur, Krupt retired to stand at the Hunter Valley’s Lincoln Farm in 2010, but was shifted shortly after to Kooringal Stud in NSW’s Riverina where he stood for six seasons before finally re-locating to Kingsley Park in Tasmania in 2017.

Sadly, Krupt died after covering just a handful of mares in the Apple Isle, with Li’l Kontra and Cashed among the pick of his half dozen stakes horses.