Lim’s Cruiser Rockets To The Top In Singapore 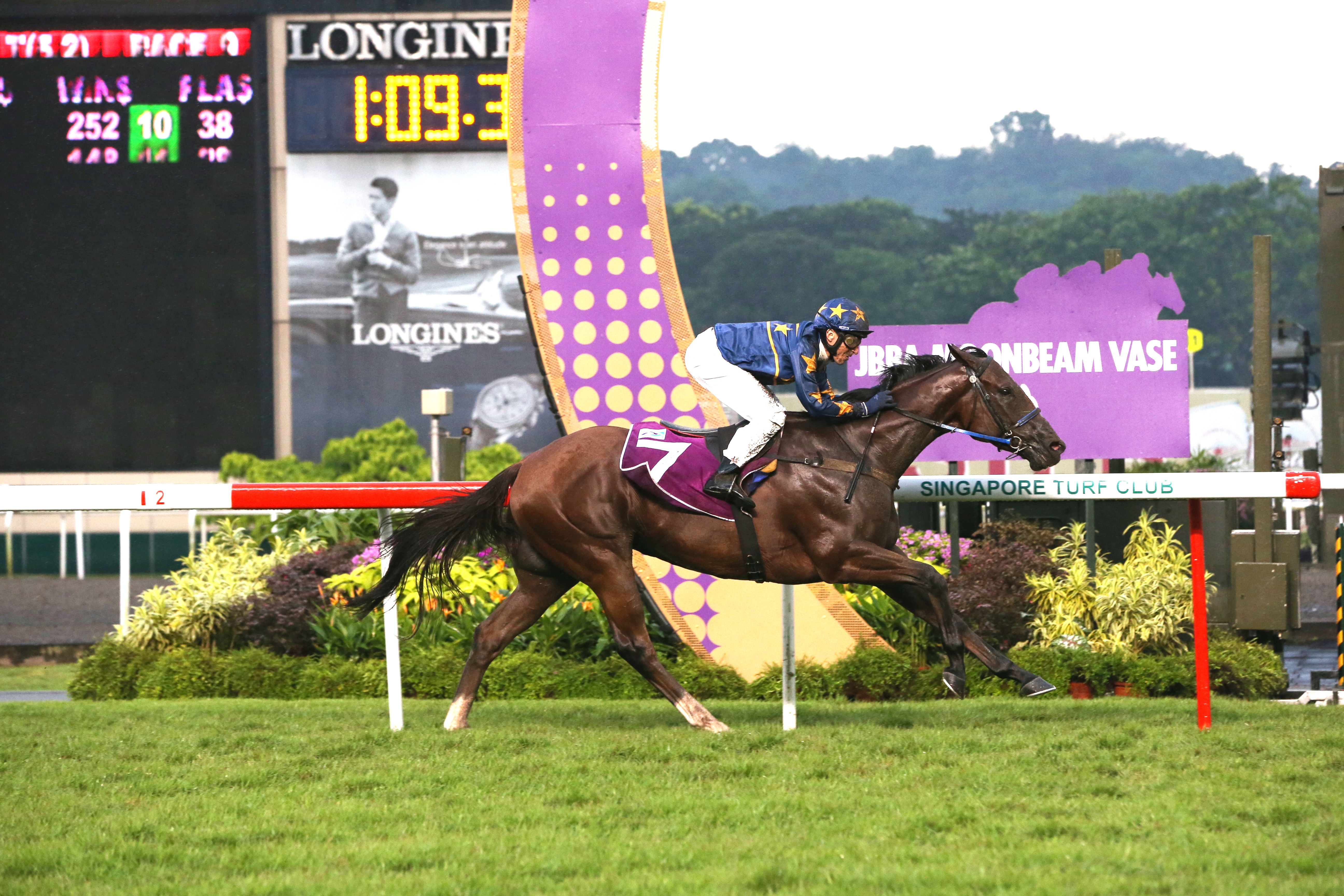 The stranglehold by Australian-breds on Singapore’s richest sprint continued on Sunday with Lim’s Cruiser living up to the second half of his name by capturing the Group One Lion City Cup (1200m) at Kranji.

Winner of the Group Two Barker Trophy last November and then snaring the Group Three Kranji Sprint when resuming in March, Lim’s Cruiser emerged from the pack in the Lion City Cup and hit the line full of running, taking his record to six wins and three placings from his nine starts in Singapore.

Trained by Stephen Gray and ridden by Aussie expat Danny Beasley, Lim’s Cruiser has established his bona fides as Singapore’s premier sprinter and joins a list of Lion City Cup luminaries such as Zac Spirit (2014 & 2016), Capablanca, Why Be, Ninetyfive Emperor, Super Racer, Classic Marco, Super Effort and, the incomparable Rocket Man who won the race four years running between 2009 and 2012.

Very few horses win majors four times in a row – Manikato, Zipping, Tie The Knot spring to mind – and Rocket Man is now living out his retirement in South Africa: nationally revered for his mostly successful campaigns in Hong Kong, Dubai and Japan, along with successive Horse of the Year titles.

Lim’s Cruiser still has a fair way to go to catch up with Rocket Man, but shares similar ‘origins’. While Rocket Man was bred by Dean Fleming in NSW, Lim’s Cruiser was the work of Dean’s brother, Lee Fleming, from his Eliza Park (now Sun Stud) base in Victoria.

Hailing from the Good Journey mare, Hope Downs, in turn a daughter of South African Champion, Battle Maiden, Lim’s Cruiser is one of 13 stakes winners by the Vinery Stud based stallion, Casino Prince.

It was a big Easter for Casino Prince, who is also the sire of Saturday’s Group Three MyPunter.com Victoria Handicap winner, Hooked.

“That was a terrific double for Casino Prince and congratulations to both Lim’s Stable (Lim’s Cruiser) and Ultra Thoroughbreds (Hooked) on their wins,” Vinery Stud’s Adam White enthused. “Casino Prince remains very popular, covering over 90 mares last spring and there’s plenty of value to be had with Lim’s Cruiser being sold at the Magic Millions Racehorse Sale for $100,000, while Hooked was a $600,000 purchase at the Patinack Dispersal.

“Casino Prince now has 250 winners and apart from his own steady stream of top performers, his son All Too Hard is off to a good start as well with The Mighty Fed winning in Sydney last week, while other first crop runners include stakes horses All Too Huiying and Mystic Empire.”

Aushorse is again sponsoring the popular Golden Horseshoe Series in Singapore and got off to a flying start on Good Friday with the West Australian bred, Charger, capturing 2017’s first leg – the Kranji Nursery.

A son of Dick Turpin from the Geiger Counter mare, Californium, Charger was raised and offered at the 2016 Perth Magic Millions by Mungrup Stud where he was sold to prominent Singapore owner, Constance Cheng, for $50,000.

Trained by John O’Hara and ridden by Michael Rodd, the Kranji Nursery was Charger’s first start and clearly the 2YO has a big future.

The Aushorse Golden Horseshoe continues to grow in popularity and is again supported by joint sponsors, Magic Millions, Inglis and IRT with $10,000 bonuses for eligible runners attached to the third (Magic Millions National Yearling Sale Stakes on 21 May), fourth (Inglis Ready2Race Stakes on 11 June) and fifth (IRT Juvenile Stakes on 23 June) legs, culminating in the Aushorse Golden Horseshoe Final – with a $50,000 bonus – on 7 July.

The second leg, the Singapore Silver Horseshoe, will be staged on 30 April.

The Aushorse Golden Horseshoe Series – now in its seventh year – has been a tremendous boost to 2YO racing in the region according to Simon Leong, Senior Vice President of Coporate Services for the Singapore Turf Club: “We appreciate the generous support from our Australian partners, without which the Singapore Golden Horseshoe Series would not have succeeded as the premier racing event to showcase our juvenile ranks.”