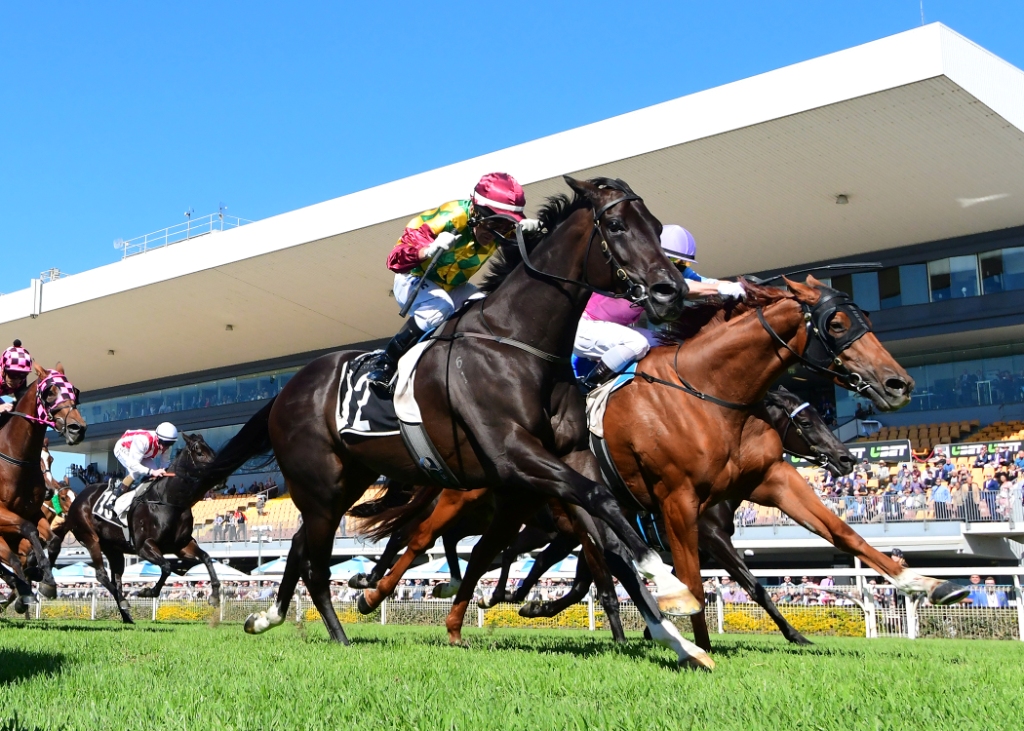 Only minutes before the running of the Listed IPG Marketing Members’ Handicap over 1600m at Doomben on Saturday, leading trainer Tony Gollan had a near miss when a horse in the saddling enclosure lashed out and came close to giving him the old ‘double barrel’.

Then Gollan had to nervously watch on as his 6YO mare Sheiswhatsheis held on doggedly to capture the Members’ by a whisker from Aqua Vite, fresh from a second in the Gold Coast Cup, while Godolphin’s Nozomi, a Group winner in March, grabbed third.

“That was two close shaves in a matter of minutes,” Gollan points out. “It was such a close finish and I really didn’t know if she’d won.”

One of 62 stakes winners for the former Darley Australia based stallion, Bernardini, Sheiswhatsheis has previously won seven of her 33 starts, but despite four black type placings in Queensland, this was the mare’s first stakes victory.

And still the luck continues …

Sheiswhatsheis’s win was more than timely for the ownership group – which includes the Kern Group Horse Syndicates and breeder, Meringo Stud – as they have entered her for the Magic Millions National Broodmare Sale at the end of May.

Aside from counting among her relations the likes of Rose of Kingston, Kingston Rule, Spirit of Kingston, Portland Player and Coup de Grace, the black type addition adds considerably to the residual value of Sheiswhatsheis.

And one can safely suspect that Sheiswhatsheis will make a whole lot more than the $30,000 she was knocked down for at the 2013 Inglis Sydney Classic Yearling Sale. Wisely, Meringo Stud opted to keep a share.

“Prior to Saturday, Sheiswhatsheis hadn’t won since August last year and the decision had been made by Meringo Stud’s owner Mr (Tony) Hartnell and Mr (Greg) Kern to put the mare through the National Broodmare Sale,” Meringo Stud’s manager, Kylie Mercer explains.

“Both Mr Hartnell and Mr Kern have lots of horses and were planning on getting rid of a few, but Saturday’s win might change that.

“Tony (Gollan) has said that, barring any mishaps, she will again run on 26 May (Group Three Lord Mayor’s Cup) which is still a few days before the sale.

“The owners will probably make a definite decision after that, but the trainer reckons there could be another good race for her on 9 June as well (Listed Wayne Wilson).

As a breeder, Meringo Stud has had a lot of win-wins over the years. Purchased by Hartnell in the early 1990s, the 250-acre property at Moruya, on NSW’s south coast, has produced many a topliner, including Group One winners Mr Innocent, Victory Vein and Mahtoum, but none greater than the globetrotting marvel Takeover Target.

“It’s a pretty good strike for a small farm which now has only around twenty mares,” long-time farm manager, Mercer, points out.

“It’s nice to add Sheiswhatsheis to the list and, even if she is sold on the Gold Coast, we still have her mum Cry Baby.

“She’s a Street Cry mare and the farm has her Dawn Approach 2YO in work with Richard Freedman and, although she hasn’t been bred to for the past two seasons, Cry Baby will definitely be covered again this spring.”