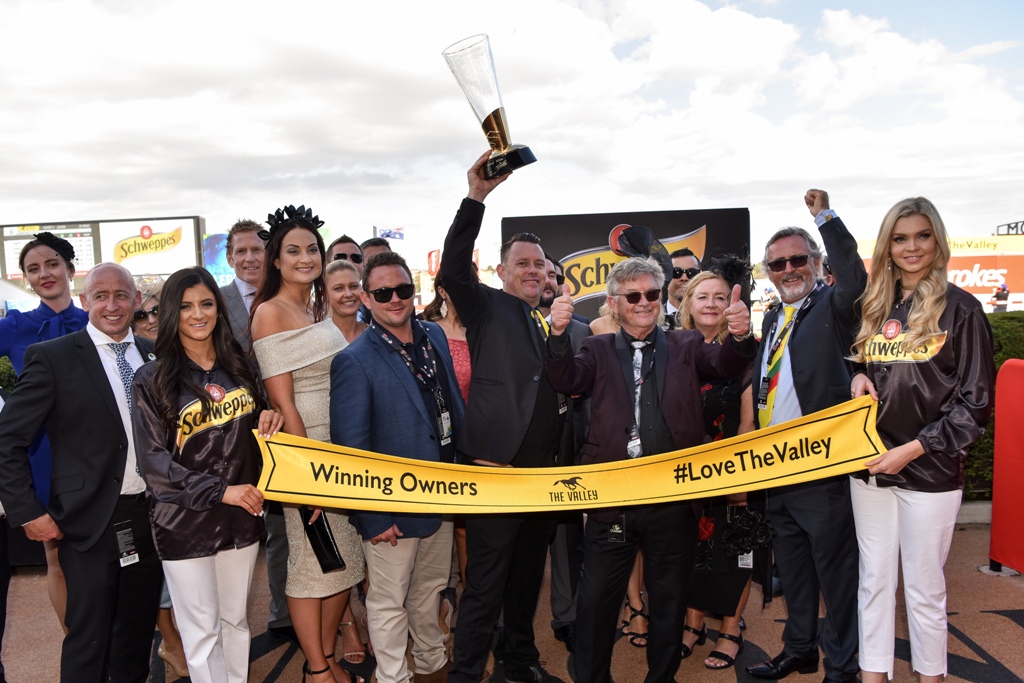 The connections of Lucky Hussler after winning the Gr.2 Crystal Mile (Racing Photos)

The Lucky Hussler of $2 million.

What a terrific racehorse he has been … and remains!

Eight years young and still capable of winning a Group Two at the pointy end of a season. Even better, he won it lugging 59kgs and doing so in 1:34.56, a tick over the course record of 1:34.42.

Not all were believers on Saturday though. Lucky Hussler was despatched for the Crystal Mile on the fifth line of betting in a nine horse contest, largely courtesy of his absence from the winners’ stall since November last year, when winning the Group Three Kevin Heffernan at Sandown – his seventh black type win.

However, his buoyant owner, Glenn Makauskas reckons the recent ‘duck eggs’ next to his name are misleading.

“He (Lucky Hussler) has had some pretty average rides throughout his career, and if you watch the replays, you’ll see him practically climbing over the backs of other horses in the run home,” Makauskas points out. “A certainty beaten on numerous occasions and we were thinking about changing his name at one stage to ‘Unlucky’ Hussler …”

Makauskas is joking of course about the moniker switch as, by his own admission, he’s been counting his blessings since first spying Lucky Hussler at the 2011 Gold Coast Magic Millions Yearling Sale.

“I buy all my own horses and I’d looked at over 400 yearlings that day,” Makauskas adds. “From the moment he came out of the box he was just such a stand out … had this real presence about him. A big boy, but not too heavy. Great eye, terrific length of rein. Just a real athlete.

“I’ve been around horses all my life and you just know when you’re in the presence of a really nice one.”
Makauskas ended up paying $100,000 to secure the then colt and placed him with Gold Coast trainer, Kent Fleming.

“Lucky Hussler is by a son of Hussonet in Husson (now standing at Aquis Farm in Queensland) from a multiple winning half sister to (2007/08) Horse of the Year, Weekend Hussler (7 Group Ones and $3 million). What’s more, Weekend Hussler is by Hussonet so the preference would have been to keep Lucky Hussler a colt, but he turned out to be a bit of a lunatic and so he had to be cut (gelded).

“I’m hardly complaining though … Saturday’s win took his tally to 10 wins and nine placings from 46 starts for $2,135,100 in prizemoney. An amazing journey. Best part of all, he has such a terrific following too. Not sure if it’s the name, Lucky, but there’s a lot of fans out there.

“Let’s put it this way, it wasn’t just me cheering at Moonee Valley.”

Formerly a property developer on the Gold Coast, Makauskas explains that he and his father, Alex, started racing horses together 40 years ago.

“We had quite a bit of success together. I’ve probably raced around 70 horses over the years, with over 50 winners, some 20 of them being city class performers. Six of those were black type gallopers including 6-time stakes winning sprinter, Rendoo, while Vain Royale (9 wins) was another good one,” Makauskas reveals.

“The family and I also race a few horses with Australian Bloodstock and will actually have a runner in the Melbourne Cup with Big Duke, which we’re all pretty excited about.

“Sadly my father has passed away, but I race Lucky Hussler with my two sisters and two of my godsons who are all right into it.

“Matter of fact, the last I saw of the Crystal Mile trophy was my sisters and godsons running around with it at Melbourne airport on Saturday night.

“Horses have always been a real passion … my kids were involved in all the equestrian sports and were national title holders in dressage and eventing, while I was heavily involved in Pony Club for a while. I’ve strapped horses and worked as a vet assistant too.

“I just love them. I’m now retired so I can indulge my passion and follow our horses all over the place.

“While Lucky Hussler was originally with Kent (Fleming) up here on the Gold Coast, I really admire the set up that Darren Weir has in Victoria: roomy stables, horses working on the beach … plus he’s a very good trainer as his record over the last few years shows. So, we made the switch (to Weir) three years ago and it’s really paid dividends.

“Before heading back to the Gold Coast on Saturday, I went around and saw Lucky Hussler to give him a hug and Darren reckons he’s pulled up well so, at this stage, he’ll back up in Saturday’s $1 million Group One Kennedy Mile at Flemington.

“After that, Darren will give him a freshen up and we’ll target the Magic Millions Cup (1400m) on the Gold Coast in January. He won the race in 2016, was unlucky in this year’s Cup and I’d love to take some more money off Gerry Harvey (Magic Millions owner) in 2018!”

Can he do it again for Makauskas and co.? We should be so Lucky!