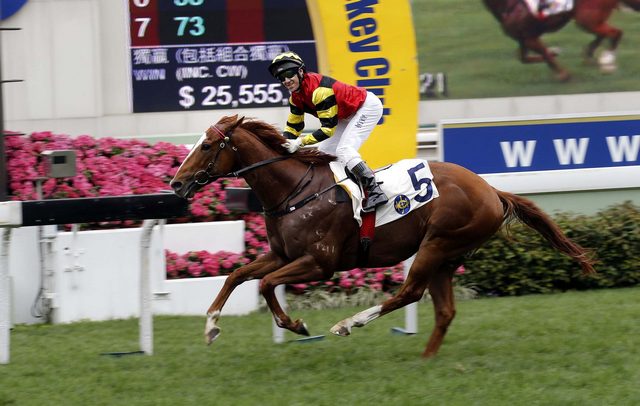 Black Caviar and ‘timing’ have a lot in common … nothing can beat either of them.

The man who bred Black Caviar, Rick Jamieson, has added another feather to the cap following the win of Lucky Bubbles in the Group Two Sprint Cup in Hong Kong on Sunday night.

Lucky Bubbles, like recent Group One Newmarket Handicap winner, The Quarterback, sports Jamieson’s Gilgai Farm brand and the Victorian farm is riding high on a foals to stakes winners strike rate that would be close to being unmatched.

Fellow Victorian farm, Three Bridges, was entrusted by Jamieson to sell Lucky Bubbles as a yearling – at the 2014 Inglis Melbourne Premier, where he was knocked down for $90,000.

Three Bridges’ Toby Liston remembers the Sebring colt well, saying that “he wasn’t big but had plenty of spirit”, an attribute that has obviously served him well given his Group success and a career record in Hong Kong of six wins from 12 outings.

“It’s been a tremendous year for Three Bridges,” Liston points out. “We raised (Stryker colt) Rangipo for John Thompson, who then took out the New Zealand Derby, while Press Statement is arguably the best 3YO in Australia and carries the Three Bridges brand.”

Liston was also confident on sale eve about the prospects of his two yearlings for Easter: “There has been a lot of interest in both and quite obviously a lot of lookers for the Frankel filly – very precocious and looks great. It’s anyone’s guess how the local market will perceive the Frankels but I think it should be a great sale overall.”

Owned by a highly successful breeder and owner in David Kobritz, Musk Creek is making only its second appearance at Easter and will offer five yearlings this week … including a three quarter sister (by Stratum) to Lucky Bubbles.

“I could say that interest has really picked up on the filly,” Musk Creek’s Manager, Darren Mackereth, said on Monday morning, “but she has been rock solid right from the start. Very popular: a striking filly.

“Musk Creek purchased Lucky Bubbles’ dam, Bubbles Below, here at the 2013 Easter Broodmare Sale for $145,000 where she foaled down a Wanted colt before being sent to Stratum, the result of which is now boxed a few metres away from me.

“It’s likely the mare will head back to Sebring this spring.”

As for the Widden Stud based Sebring, a rising star of the stallion ranks with Dissident, Criterion, Bring Me The Maid, Seaburge and company all on his resume, Lucky Bubbles was his first Group winner in Hong Kong.

It certainly will only add to Sebring’s regard with 44 of his yearlings catalogued for Easter, 11 of those from the Widden draft.