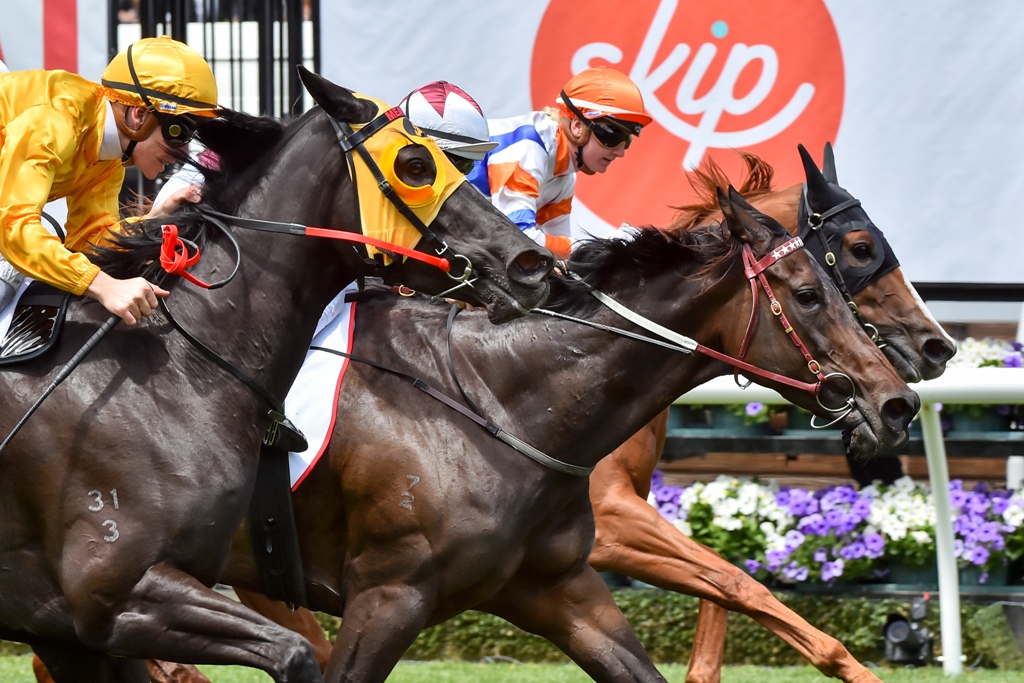 Well, getting Darren Weir to buy a horse for you might be a good place to start.

On Saturday at Flemington, the Weir sourced and trained, Lyuba, had her biggest day at the races when capturing the Group Three Skip Sprint over 1100m, hitting the lead in the shadows on the post and just holding off a last gasp challenge from a fast finishing Savanna Amour.

It was a deserved black type breakthrough for the 5YO mare who is having just her third campaign, kicking off her career in March last year with three successive wins … resuming in November with wins at Moonee Valley and Flemington … producing Group placings in Tasmania earlier this year and … coming into the Skip Sprint, had finished second in the Listed Alinghi over 1100m at Caulfield on 21 October.

All up, six wins and seven seconds from 17 outings.

Not bad for a horse that cost just $2,000 at the 2014 Inglis Melbourne VOBIS Gold Yearling Sale when offered by Swettenham Stud on behalf of breeder, Liverpool Street Investments.

“Darren (Weir) saw her in the parade area at Oaklands Junction, just before she went into the ring,” Darren Weir Racing Manager, Jeremy Rogers reveals. “She had this big haematoma on her backside and I guess that put a few buyers off, but Darren reckoned she was a really good sort and thought he couldn’t go too far wrong with a horse that cost only two grand.

“Darren got a few friends and a few clients into her – about a dozen all up – and, particularly after Saturday, I reckon they’re happy to have come on board.”

The typically laidback, Weir, was quick to swat away any accolades after the race, saying: “don’t worry, I buy a lot for $2,000 that are no good”, but the trainer does have a habit of turning straw into gold.

Dual Group One winner, Palentino cost $85,000 as a yearling and won $1.3 million, while Trust in a Gust was purchased for $45,000 before raking in nearly $1.2 million on the track. Both are now standing at stud in Victoria.

“However, in terms of really cheap buys coming good, Lyuba would have to be the gold standard I’d imagine,” Rogers adds.

Lyuba is the third stakes winner for Group One winning Johannesburg sprinter, Turffontein, who stands for $8,800 at Victoria’s Blue Gum Farm, and is out of the General Nediym mare, Dancing With Amy.

Unfortunately for Liverpool Street, Dancing With Amy only produced the solitary foal – Lyuba – before dying in 2013.

Fortunately for Weir and co. though, Lyuba’s residual as a broodmare increased substantially courtesy of adding Group success to the resume and if she is to appear in a sale ring when her track days are done, you can be assured she will cost a lot more than $2,000 this time around!