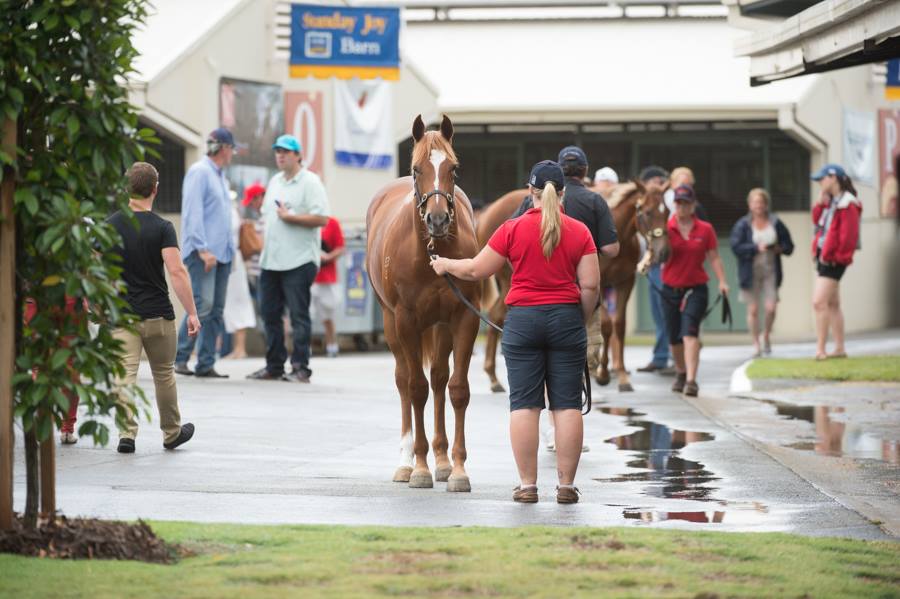 It’s not an unreasonable sales pitch.

If you want to own a Golden Slipper winner like Vancouver, or a Cox Plate winner like Winx, you should go to the sale at which they were sold.

That being the Magic Millions Gold Coast Yearling Sale that begins on Wednesday, and the company is proudly polishing the records of its recent star graduates.

They might also do well to promote NSW breeder John Camilleri who bred both Vancouver and Winx and who has another small but select draft on offer this week.

Camilleri’s latest two headline horses are not only among the best to have raced in Australia in 2015, they are the latest of five Group 1 winners and a dozen other stakes winners he has bred from a relatively small band of mares.

“I really only got involved in the thoroughbred business fairly recently,” says Camilleri.

“But I decided very early that the way to go was to put together a very small, boutique band of mares that have deep pedigrees and that are really ‘A’ grade physically and then send them to proven stallions.”

As sound as the Camilleri approach has proved to be, his introduction to racing featured more luck than science.

Camilleri was offered the choice of two colts by the syndicator Harry Lawton, one by Sir Tristram, the other by Danzero.

“I didn’t know much about it and for no particular reason I picked the Danzero which Harry had bought for $40,000,” he said.

The horse raced as Fairway and won 10 races, including the 1999 Spring Champion Stakes and the Canterbury Guineas and Australian Derby of 2000, all at Group 1.

He also lent his name to Fairway Thoroughbreds under whose banner Camilleri runs his breeding and racing operation.

“Since Fairway, I’ve taken some good advice from people like Peter O’Brien from Segenhoe Stud and I think I’ve also had some help from above,” he says.

Vancouver’s Golden Slipper win not only made him the top money-winning juvenile of last season, it led to him being syndicated as a stallion for $20 million. Winx’s Group 1 treble of the Queensland Oaks, Epsom Handicap and Cox Plate made her a broodmare of inestimable value as well as the best horse in training.

At the Gold Coast this week the Fairway offerings includes a half-brother to Vancouver by Pierro, catalogued as lot 612 (pictured right).

“I’m absolutely rapt in him,” Camilleri said. “He looks the part and he’s got some character, I’m proud to be offering him.”

For Magic Millions, Vancouver and Winx are among a list of graduates who win some 6000 races around the world each season.

Last season the company sold 13 of Australia’s 37 individual Group 1 winners who between them won 16 times at the elite level.

As well as the two headline performers, Magic Millions sales produced such other stars over the past 12 months as reigning Horse of the Year Dissident, Caulfield Guineas winner Shooting To Win, Thousand Guineas winner Amicus, Sweet Idea who won the Galaxy and Lucky Hussler and Boban who have won Group 1 races last season and this.

In all, Magic Millions graduates have won 49 Group 1 races and have scored more than 500 stakes wins. Of the past 12 Golden Slipper winners to be sold at auction, nine have gone through the Magic Millions Gold Coast sale.

This year’s flagship sale has again brought together an outstanding offering that will be bid for by both Australia’s biggest buyers along with an international buying bench attracted by both quality and value.

“There seems to be an encouraging vibe around the place,” says Magic Millions managing director Vin Cox.

“We are happy with who is here already and we are particularly happy with the quality or horses that we have on offer right across the complex.

“We have probably got the strongest contingent of internationals coming to this sale ever which is on the back of the support that breeders have given us with elite horses.

“We have a lot of American’s here …. Europeans, a big contingent from South Africa, buyers from all parts of Asia and obviously the Kiwi’s.”

The international buying bench will include many of the “new world” investors who have boosted this and other Australian sales in recent years.

The China Horse Club who last year spent around $3 million at the Gold Coast and which has enjoyed tremendous racetrack success, most notably from five-time Group 1 winner Dissident, is back, as is Macau’s CC Lai who celebrated Group 1 victory this season in Australia with Delectation in the Darley Classic.

Chinse businessman Zhang Yueshang, whose Yulong Investments has been a notable buyer at Australian sales, will also be represented, along with An Zhiqiang, an Australian sales regular who owns a racecourse at Hohhot in Inner Mongolia.

Another whose presence will be welcomed by more than just the organisers is Chinese property developer Wang Jianlin who is sponsoring the VIP marquee at next Saturday’s Magic Millions raceday.

International buyers signed for the three highest-priced lots at last year’s Gold Coast sale with the US-based Spendthrift Farms topping the list with its $1.2 million bid for the colt by Sepoy from Sister Madly.

Spendthrift duly made its Australian intentions clear by setting up a breeding base in Victoria where it bought Yallambee Stud and is expected to be among the top-end buyers again this year.

As successful as the Gold Coast sale has become, it now competes for attention with the race meeting it created.

The meeting has thrown down a challenge not only to the trainers of every horse purchased at every Magic Millions sale, but to Australia’s major racing clubs.

And along with realistic prices, a world-class prizemoney pool and a booming stallion market, it makes Australia the simple choice for buying and racing a horse.