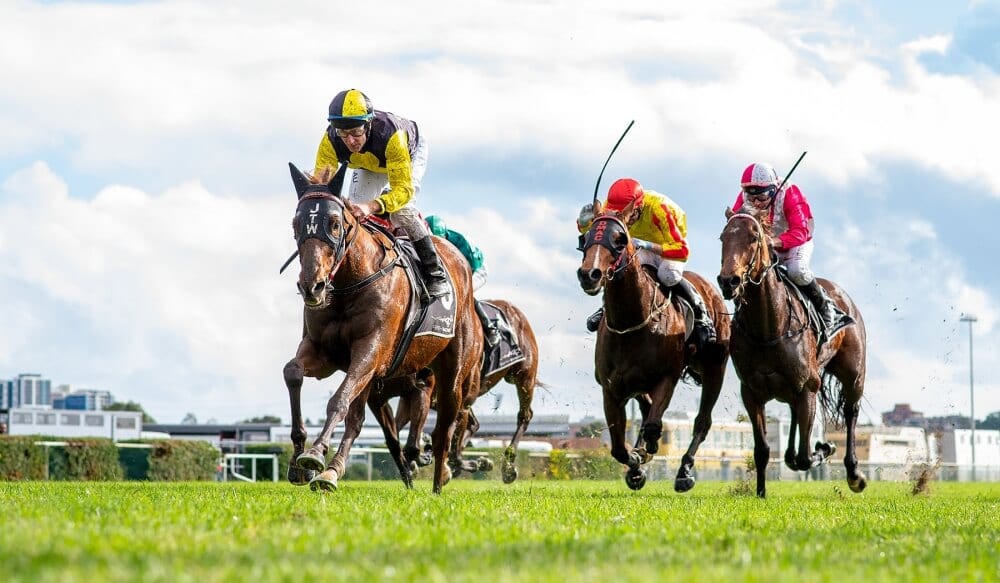 The timing couldn’t have been any better … certainly not as far as Joe Heather is concerned.

On Saturday at Belmont Park, the Justin Warwick trained Material Man ended a two year drought by capturing the Group Three Hahn Superdry Strickland Stakes over 2000m. It was the rising 9YO’s first win since the 2018 Strickland, but, to be fair, Material Man had run placings later that year in the Group One Railway and Group One Kingston Town.

Still, an unsuccessful stint in Melbourne, followed by two moderate performances this time in had plenty questioning whether the once mooted Cox Plate contender would ever return to the winners’ circle.

However, after just 11 days back under the care of his original trainer, Warwick, Material Man has taken his tally to 15 wins and seven placings from 35 starts for $1,801,975 in prizemoney.

Not surprisingly, the victory comes as a massive relief to Warwick – “the best horse I’ve ever trained” – along with breeders/owners, Michael and Jill Macdermott. Perth connections aside, you could almost hear the cheering too from River Junction’s Joe Heather: watching on the telly from 4500 kilometres away.

Heather took the punt, three years ago, to purchase Material Man’s dam, Del Lirio for $27,500 at the Inglis Digital August Sale, by which time Material Man had won just two of his eight stakes races.

It was an even more of a shot in the dark for the young breeder given that the Hussonet mare, Del Lirio, had produced just the two foals and hadn’t been served for the previous four seasons.

Unfortunately, Del Lirio’s first try for Heather was a miss to Wandjina, while the following spring saw the mare fail to get in foal to Menari. She was then switched to Sizzling – Snitzel’s Group One winning 2YO – who is now based at Riverdene Stud in NSW.

“I really like the Snitzel / Hussonet cross – it’s got something like a 75% strike rate – and the mare has produced an absolutely cracking type of filly that will go to next year’s Gold Coast QTIS sale,” Heather explains.

“That’s why I was cheering myself hoarse on Saturday,” Heather reveals. “We’ve got eight mares and five weanlings heading to the Gold Coast and she (Del Lirio) is definitely a feature after the Strickland. Couldn’t have come at a better time.”

Roger that! A highly experienced horseman, Heather has worked for Patinack Farm, Sun Stud and was manager at Telemon Thoroughbreds before establishing, at the start of this year, his River Junction farm at Kybong – some 90 minutes north of Brisbane on the Noosa Hinterland.

Heather admits that opening the gates on the eve of the coronavirus outbreak wasn’t in the business plan, but is philosophical about the impact.

“Sure, it’s tough times but we’ve got a brilliant farm – I actually managed the property a few years back and jumped at the chance to become a part-owner,” Heather adds. “We’ve also chosen wisely in terms of broodmares on farm and fingers crossed the sales will go well.

“Besides, it’s 8am on a Monday in winter time and it’s already 17 degrees, so why would you be complaining. How come anyone lives below the Tweed River?”

The Magic Millions National Broodmare Sale will be conducted on the Gold Coast from 20-22 July, to be immediately followed by the National Weanling Sale (23-24 July), the National Yearling Sale (27-28 July) and the National Racehorse Sale (28 July).