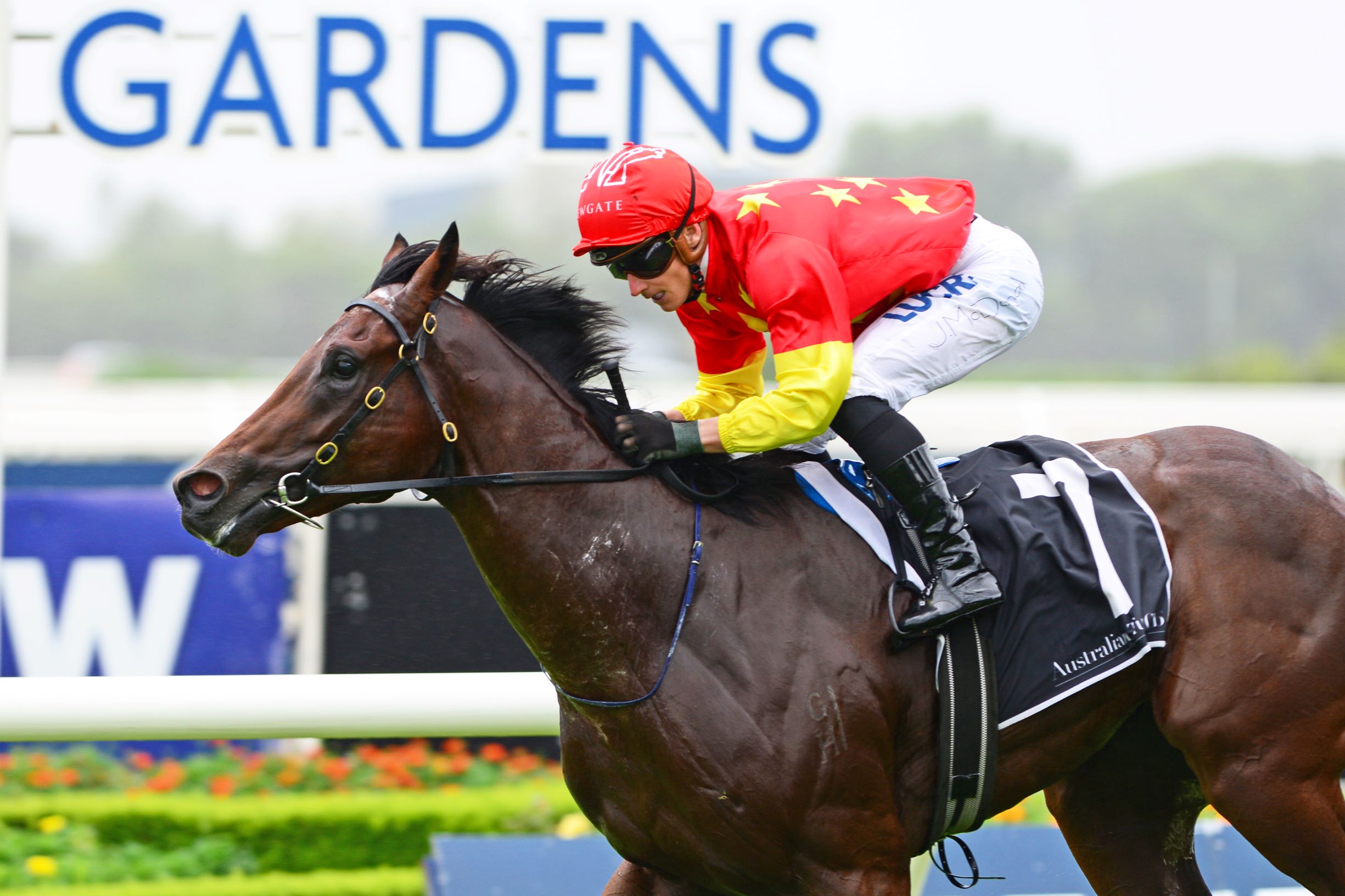 First, you purchase a well bred, athletic colt at an Australian yearling sale.

Third, colt is valued at millions of dollars and heads off to a life at stud.

Simple! Well, maybe not quite that simple, but the operation that is China Horse Club, Newgate Farm, WinStar Farm, SF Bloodstock and Mathew Sandblom appear to have found some inside running over the past few years.

After both being sourced at Australian yearling sales by Newgate & Co., the Group One winning pair of Russian Revolution and Invader each covered outstanding first books last spring, with Russian Revolution standing at Newgate Farm, while Invader is among the headline acts at Aquis Farm’s Hunter Valley complex.

Now, based on a successful ‘launch’ on Saturday, Russian Revolution may eventually be joined at Newgate by exciting 2YO, McLaren, who captured the Group Three Canonbury Stakes over 1100m at Rosehill Gardens.

It was quite the debut from the Exceed And Excel colt who sat just off the leader until hitting the front with 200m to travel and holding on strongly to score with nearly a length to spare.

McLaren came into the Canonbury on the back of a seven panel trial victory at Warwick Farm on 22 January and trainers, Peter and Paul Snowden clearly have a huge opinion of the youngster.

“There’s definitely room for improvement and he did a few things that you don’t want to see them do,” Peter Snowden reveals, “but he’s got a lot of talent and you can’t do any more than win … and he’s done that alright.”

Newgate Farm’s Henry Field agrees with Snowden’s assessment and is clearly anticipating what the coming weeks and months will bring.

“There were a few anxious moments before he went into the barriers, but he obviously has high class ability,” Field enthused. “He’s still only a baby, mentally and physically … he was a late foal and that gave us some cause for concern at the sale (McLaren was purchased from the Baramul Stud draft for $380,000 at the 2018 Gold Coast Magic Millions Yearling Sale), but he’s also an incredibly athletic type: rangy, well angled.

“Big, but well put together and you could see how he was going to take shape, so we took the gamble.

“I’d suggest McLaren will remain in Sydney and run in the (Group Two) Silver Slipper (on 23 February) before, fingers crossed, tackling the ($3.5 million Group One) Golden Slipper (at Rosehill Gardens on 23 March). However, everything he does from here is a bonus and I reckon you’ll see the best of him in the spring as he fully matures.”

A son of the Darley based, Exceed And Excel (154 stakes winners), McLaren is a three quarter brother to Group placed 2YO Cao Cao (owned by another massive Chinese investor in Sun Stud) and is out of Encosta de Lago mare, Serenada, a half sister to Group Two winning sprinter, First Command and Group Two Hong Kong winner, Oneworld, while other close relations include Group One winning sprinter, River Dove and Silver Slipper winner and sire, Headwater.

“On behalf of the group, I work in closely with Michael Wallace (China Horse Club) and Tom Ryan (SF Bloodstock) at the sales and we buy around 15 annually,” Field explains. “It’s been going very well so far with a dozen stakes horses in the last few years, including two Group One winners in Russian Revolution (The Galaxy / Oakleigh Plate) and Invader (ATC Sires’ Produce).

(Originally sold for $320,000 at the 2015 Inglis Australian Easter Yearling Sale, Russian Revolution won nearly $1.3 million on the track and stood his initial season at a fee of $55,000.

“I’m particularly happy with the way everything has been going with this season’s 2YOs,” Field notes. “Aside from McLaren, we’ve had Hightail run third, beaten less than a length, in the ($2 million) Magic Millions 2YO Classic, Strasbourg ran second in the Listed Nursery, Jonah finished third in the Golden Gift, Autocratic is a half brother to Russian Revolution and is showing a lot of promise, Mandela has trialed well and Cosmic Force is due to resume in Saturday’s ($2 million) Inglis Millennium at Warwick Farm after winning his only race in November.”

Aside from all the excitement on the track, Newgate Farm is gearing up to sell 34 youngsters at the 2019 Inglis Sydney Classic Yearling Sale – a 5-day, 1013-strong auction – which kicks off after the Millennium on Saturday evening.

“We’ve got a big draft for Sydney with yearlings by 16 different sires, but I reckon there will be a lot of interest around the I Am Invincible colt from (stakes placed) Teardrop Rock,” Field adds. “We had three top class I Am Invincible colts to sell this year and strategically decided to sell one at the Magic Millions, one at the Classic and one at Easter.

“The I Am Invincible on the Coast (ex. Champagne Cath) sold to Chris Waller and Guy Mulcaster for $1.1 million, the colt from Your Life Style – Shantha’s Choice’s family (Redoute’s Choice, Shoals, Rubick etc.) – is heading to Easter and I wouldn’t be surprised if our I Am Invincible goes close to topping the Classic.”