Magic Millions Hopeful Gets In On The Act 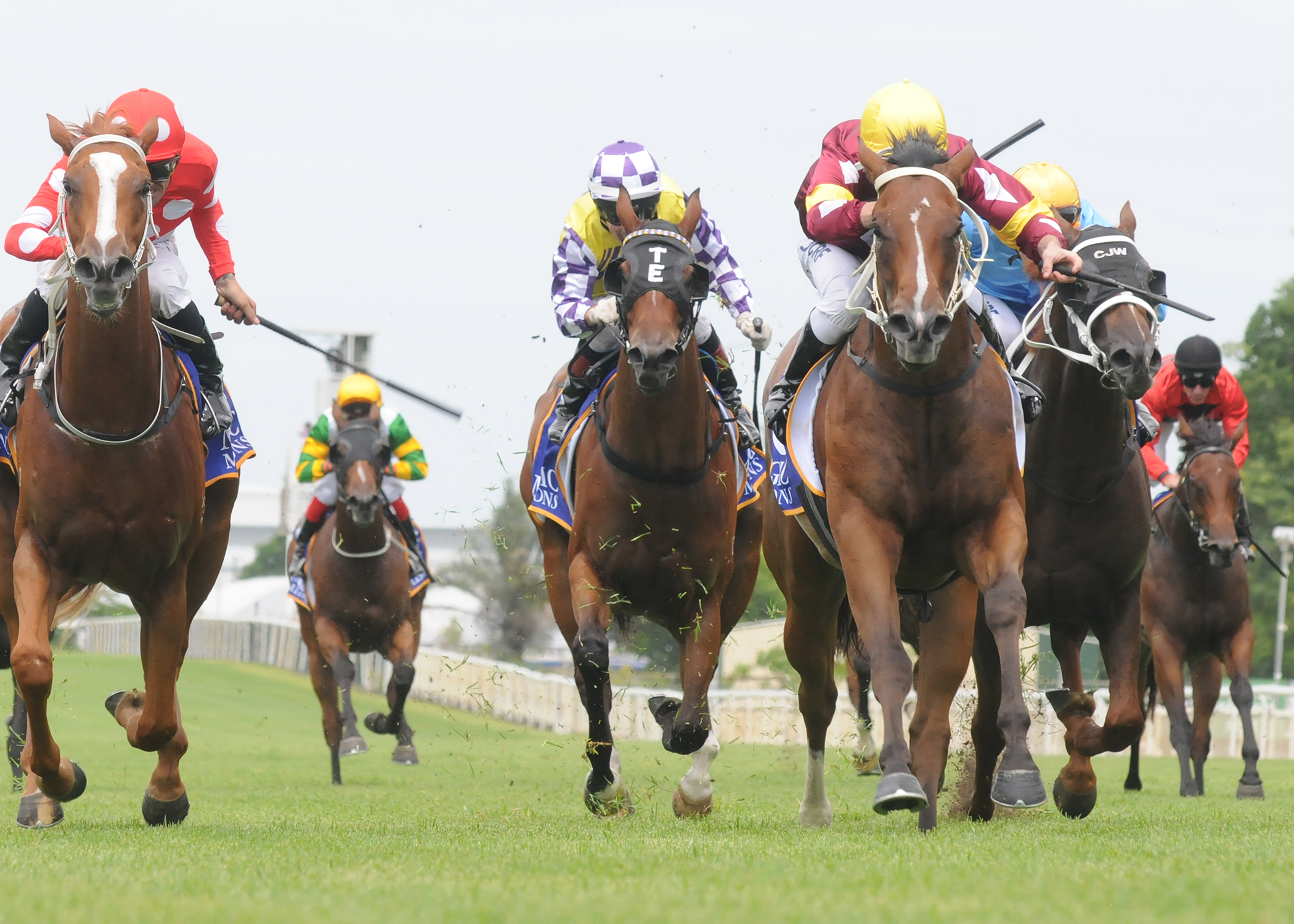 Meryl (gold cap) books herself a place in the Magic Millions 2YO Classic taking out the Gr.3 BJ Mclachlan Stakes (Trackside Photography)

Nick Hodges liked his Epaulette filly from the get-go.

Shortly after she was foaled, Hodges shot a video of the youngster and sent it through to the crew at Darley, which stands Epaulette just down the road from the breeder’s Riversdale Farm at Scone.

“Take a look at this … she should go alright,” was Hodges’s accompanying missive.

He was right alright.

On the final big race meet of 2017, the Epaulette filly – Meryl – won the Group Three BJ McLachlan Stakes at Doomben and has now vaulted into contention for Saturday’s $2 million Magic Millions Classic over 1200m at the Gold Coast.

Making her debut in the Listed Gimcrack Stakes at Randwick in September – leading early before finishing sixth – Meryl really stepped up a notch at Doomben, having to steer around some fading heels at the 200m before producing a withering burst to get home with three quarters of length to spare.

“I didn’t feel she was at her best in the Gimcrack and the break has done her the world of good,” Meryl’s trainer Lee Curtis mused. “I think she will be further improved for the Magic Millions race, but it’s going to be very tough.

“It’s an exciting time though.”

And timely for Hodges too as Riversdale Farm is poised to sell an Exceed And Excel three quarter brother (Lot 476) to Meryl late in the second session of the Gold Coast Magic Millions Yearling Sale this Thursday.

“We couldn’t have asked for a better result this close to the sale,” Hodges adds. “Meryl’s dam, Academy Idol, throws brilliant athletes and is – touch wood – just one of those hassle free mares. She produced a lovely Headwater colt in the spring and is currently in foal to Star Witness.

“I actually wanted to keep Meryl because she was such a lovely type, but my wife Jasmine and I were buying Riversdale off mum and dad so she needed to go through the ring. I’m really happy for the new owners though – they’re great people.”

Meryl was purchased by Randwick Bloodstock and Mystery Downs for $150,000 at the 2017 Gold Coast Magic Millions and given she’s a half sister to two stakes performers, from a sister to Flemington Group winner, Cosmic Strike, she has already repaid (residually at least!) the investment.

“She (Meryl) is just a quality individual,” Randwick Bloodstock’s principal, Brett Howard, enthused. “Steve O’Connor, who has worked at Randwick for three years and plays an integral role, was a huge fan of the filly as well.

“Mystery Downs is owned by Francis Cook, who has horses with around 25 different trainers and also pays the bills for Lasqueti Spirit, the 2016 Group One ATC Oaks winner that’s trained by Lee (Curtis) too.

“I’ve known Francis for quite a while, but it was the first year we’ve really worked in together and hopefully it’s really come up trumps with Meryl.

“We were actually looking for yearlings that could be raced by Francis’s wife, Christine and her friends, to capitalise on the big bonus offered by Magic Millions for horses with all-female ownership.

“Christine and her mates actually won a $325,000 bonus in the 2YO Classic with Faraway Town two years ago, despite the filly only finishing sixth.”

(Trained by Matthew Smith at Warwick Farm, Faraway Town would later run third to Yankee Rose in the Group One ATC Sires’ Produce Stakes plus three other stakes placings as a 3YO).

Meryl is the first stakes winner for her Group One Golden Rose winning stallion, Epaulette, one of three first season sires with runners in the 2018 Magic Millions 2YO Classic.

“I’ve never seen anything like it,” Magic Millions Media Manager, Greg Irvine, enthused. “Eureka Stud’s Spirit of Boom has three runners including two of the favourites in Jonker and Ef Troop, Epaulette has Meryl and could easily have had another with Katy’s Daughter, but she’s out injured, while Zoustar has Sunlight who will give the race a good shake as well.

“That’s more than a quarter of the final field by first season sires including the three pre-post favourites. I’m pretty sure that hasn’t happened previously, but then again, what a vintage crop it’s turning out to be. Spirit of Boom had three stakes winners in the space of five days and seven individual winners before the end of 2017. Simply incredible.”