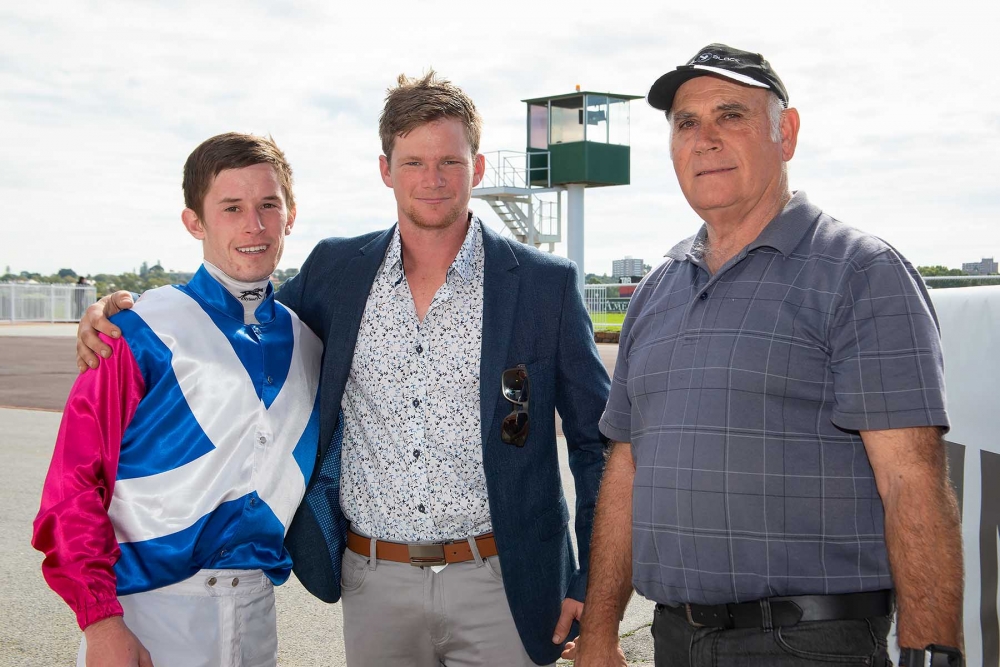 Connections of Mia Dolce after winning at Belmont (Western Racepix)

Perth galloper, Mia Dolce, is rapidly gaining something of a cult following out west. A $2,000 yearling purchase, the Patronize filly had her 14th start (yes, that’s not a misprint) on Saturday, notching up her sixth win, along with four other placings.

It gets better. Mia Dolce was selected by, broken in by, part-owned by and is now trained by Jayce Buckley, who only took out his licence in June and has six boxes, two of them currently empty, at Perth’s Ascot racecourse.

Indeed, Buckley – with his two wins and a second as a trainer – boasts a strike rate that few have ever matched.

The easy going Buckley, 27, was a jockey for five years but constantly struggled with his weight and always had his eye on a career in training.

“I rode a few Saturday winners but weight was always an issue and after passing out a couple of times in the sauna, you quickly realise it’s not the healthiest way to live,” Buckley points out. “Anyway, I love training and absolutely look forward every morning to getting down to the stables. It’s easier, in a way, when you’re riding them because you don’t have to worry about paying the bills, but I really wouldn’t want to do anything else than training.”

Buckley clearly has an eye for value too, purchasing Mia Dolce for just $2,000 at the 2018 Perth Magic Millions Winter Yearling Sale.

“A mate of mine, Gil Cianciosi, hadn’t had much luck racing horses and so I said to him we’d go down to the Winter Sale, buy one and go halves,” Buckley reveals. “I always liked the Patronizes because they are so versatile, while Mia Dolce’s mum, Mia China Doll, was a very fast horse who won six races. I wanted something that would go early and that’s exactly what we ended up with.”

With his trainers’ licence taking over six months to come through, Mia Dolce was with Frank Pangallo for her first half dozen outings, then switched to George Davies, before Buckley took over in June.

“She’s a phenomenal filly really. Her first run was back in November and she’s had just the one short break,” Buckley explains. “The horse has only finished out of a place four times and one of those was fourth, beaten less than two lengths, in the ($250,000 Restricted Listed) Magic Millions 2YO.

“We give her little breaks on the grass and out to the beach, but the thing is, she seems to get sour – bored – if she’s out of the stable for longer than a couple of weeks. A dream filly really and doesn’t miss a trick.”

Following Saturday’s run however, Mia Dolce is out for a breather with Buckley suggesting the filly will be brought back in time for the Listed Belgravia Stakes on 26 October and Listed Burgess Queen Stakes on Melbourne Cup day.

It will hardly come as a surprise if Mia Dolce’s rapidly growing fanbase hope that the filly – literally – has Buckley’s chance of adding that all-important black type to her resume.

Not surprisingly, one of Mia Dolce’s biggest fans is Brent Atwell, who bred the filly at his family-owned, Darling View Thoroughbreds, some 50 kilometres south of Perth.

“After we sold her at the (2018) Perth Magic Millions Winter Yearling Sale she came back to the farm for a couple of weeks and I think that’s probably the longest break she’s had since,” Atwell enthused. “The filly just seems to thrive with all the work and well done to Jayce.”

Darling View Thoroughbreds is a third generation property stretching over 350 acres at Mundijong and was originally operated as a dairy farm, but the Atwells determined to “get commercial” around eight years ago and stand both Patronize and Oratorio’s Group Two Karrakatta Plate winner, Lucky Street, whose oldest progeny become yearlings on Thursday.

“We have always had an interest in thoroughbreds and my great grandfather raced the 1925 Perth Cup winner, Great Applause,” Atwell adds. “A decision was made to step it up a notch though and we ended up getting Patronize on farm seven years ago after he’d first started covering mares in 2007.

“He (Patronize) is a son of Redoute’s Choice and three quarter brother to Exceed And Excel, but like so many other stallions, he just really hasn’t had much in the way of opportunity. Ironically, his fee ($4,400) tends to put breeders off but he’s got 68% winners to runners along with stakes winners like Chix Pic (2018 Perth Stakes), Enchanted Dreams and Miki Two Toes.

“He actually had a winning double at Belmont on Saturday with Mia Dolce and (stakes placed) Fred Dag who, as it turns out, won a double for him at Belmont two weeks earlier. Bloody good value.”