Will Laing Mare Rock On To Everest? 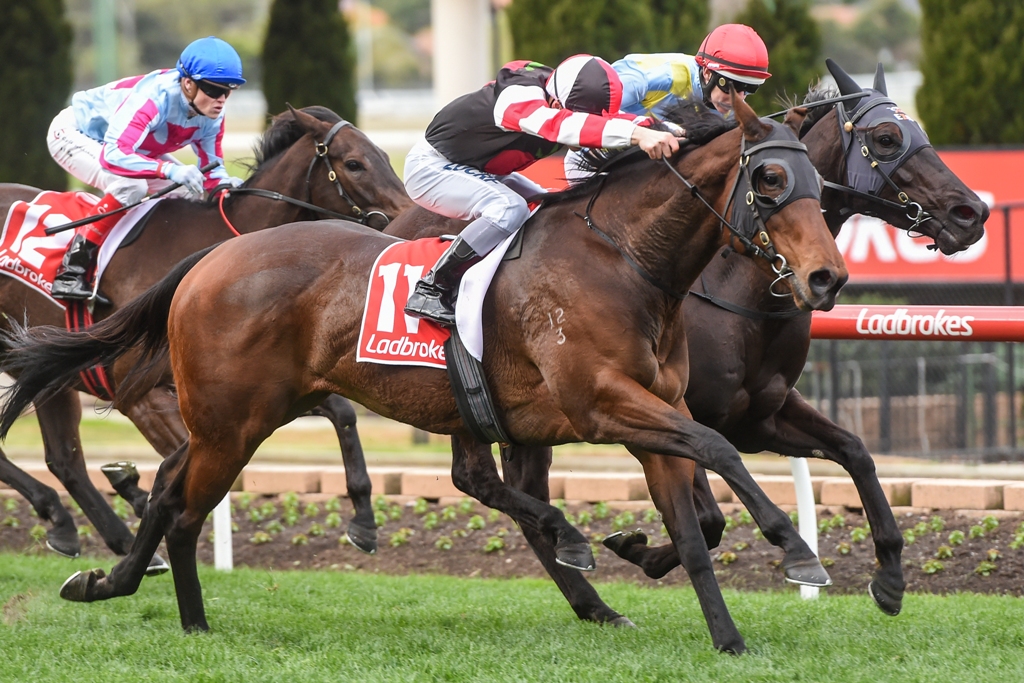 The ‘smart’ money was on Heatherly in Saturday’s Listed SAJ Fruit Supply Carlyon Stakes over 1000m at Moonee Valley.

And, yes, while her shenanigans in the barriers were anything but lady-like, the mare did dominate until well into the straight and a fourth stakes victory appeared to be well within her grasp.

However, as Missrock suddenly loomed over the closing stages, it was worth remembering the Fastnet Rock mare had previously won three from four first up runs and was thus a clear and present danger. Ultimately, Missrock would win out by a neck and take her tally to four wins and four placings from 15 starts for $972,100 in stakes.

Winner of the Listed Debutant Stakes on debut as a 2YO, Missrock won the Group Three Percy Sykes in April last year, while her most recent effort, prior to Saturday, was a three quarter length second behind Vega Magic in the Group One Goodwood Handicap at Morphettville in May.

Based on Missrock’s form first up and previous runs against quality opposition, trainer Robbie Laing admitted he was confident coming into the Carlyon: “Going through the field earlier in the week, the barometer was which one of these (rivals) could run second in a Goodwood,” Laing points out. “There wasn’t many of them. I thought we’d be giving Heatherly a start, but this mare (Missrock) has a bit of guts about her.”

Aiming high after the Carlyon win – both literally and metaphorically – Laing believes Missrock will benefit from a step up in distance and is hoping to secure a slot in the $10,000,000 The Everest at Randwick on 14 October.

“Let’s put it this way, she’s got Vega Magic form and beat English home two starts ago and they’re talking Everest for that pair,” Laing adds. “If Missrock won a Group race in the next few weeks she might just get a spot in the Everest and she also goes well at Randwick.

“Failing that, she could be a lightweight chance in the (Group One) Rupert Clarke over 1400m at Caulfield in October. Hopefully she can win a Group One .. she’s a very valuable mare as she is, but if we can build on that it would be terrific.”

It hasn’t all been wine and roses for Laing’s mare, who suffered a stress fracture of the pelvis in the Merson Cooper Stakes at two and had to be immobilised for six weeks. Total box rest.

“When I went to see her at Melbourne Uni she had this huge indentation near her rump that you could fit a football in,” Laing reveals. “However, (veterinary surgeon) Glenn Robertson-Smith told me it would regenerate over time and it doesn’t appear to have affected her in any way.”

Laing purchased Missrock for $500,000 as a yearling from the Cressfield draft at the 2015 Gold Coast Magic Millions and, Everest or not, it’s been money well spent.

“I didn’t see her on the Gold Coast until she was in the ring but noticed that people like Hawkes and Freedman were bidding on her, so that gave me confidence to put my hand up at $475,000,” Laing explains. “She was passed in and when I went around to see Cressfield … they were firm on the $500,000 and I was happy to go the extra mile.”

Owned by Bruce Neill, who also bred and races 2017 Group One winner, Clearly Innocent, plus Group winner, Egyptian Symbol, Cressfield is a 3,500 acre property in the Hunter Valley and is managed by Wayne Bedggood.

“That was a terrific performance by Missrock on Saturday and well done to Robbie and connections who are such great supporters of the farm,” Bedggood enthused.

(Cressfield also sold a Redoute’s Choice colt, The Sword, for $200,000 and Frankel 3YO, Frankel My Dear, to Laing for $500,000 at the 2016 Inglis Australian Easter Yearling Sale, with the Frankel having his second start in Saturday’s Listed McKenzie Stakes at Moonee Valley, finishing midfield).

“Missrock is indeed a valuable mare, particularly given the strength of the pedigree,” Bedggood adds. “Cressfield raced Missrock’s dam, Miss Judgement, and she won a Group Three and a Listed race in Melbourne for Peter Moody … 10 wins all up.

“What’s more, she’s a half sister to three other stakes winners in Oakleigh Plate winner, Mrs Onassis, Fifth Avenue Lady and Aussies Love Sport, while her granddam is the multiple Group One winning mare, Lady Jakeo.

“While Miss Judgement produced a full sister to Missrock last spring, she didn’t get back in foal to Fastnet Rock last year.

“I’d suggest she’s likely to go back to him this spring because, as you can imagine, the ‘boss’ is pretty keen on the mating!”