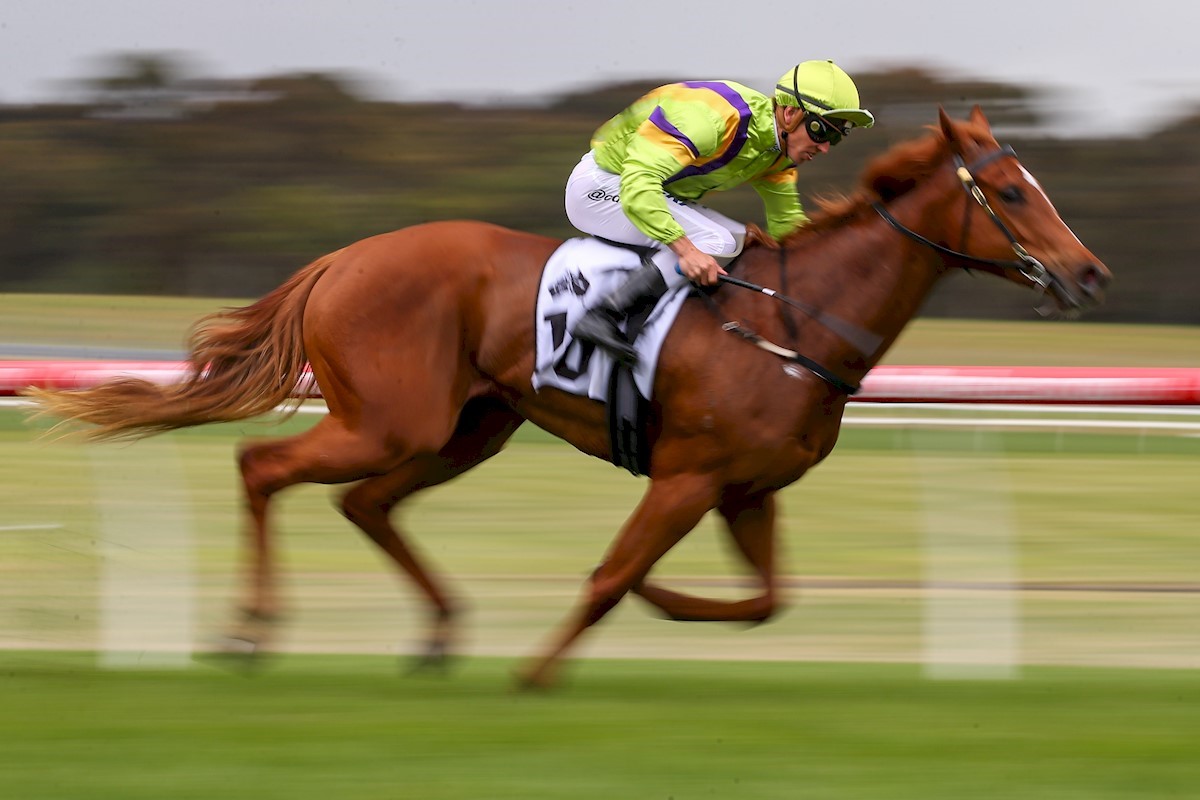 There is nothing new, per se, about the racing silks of David and Jenny Moodie, which have been made famous around Australia over the past few decades … usually for crossing the line first.

That said, there was a lot ‘new’ about the flashy chestnut filly, Arctic Angel, who was making just her second appearance when successful in Saturday’s Listed Thoroughbred Club Merson Cooper Stakes at Sandown.

The 2YO had clearly benefited from her fourth on debut in the Group Three Ottawa Stakes down the Flemington straight on Cup Day and didn’t deviate from the given path this time around.

And there’s also something else that’s (relatively) new. Unlike many of the stakes winners that have run and won under the Moodies’ Contract Racing banner, Arctic Angel is bred and owned by ‘Hesket Bloodstock’, a new entity in partnership with Ashley Hardwick, who took a half interest in 50% of the Moodie mares a few years back.

“Ash, David and I own about 40 mares and Arctic Angel hails from the second crop since the partnership was set up,” Jenny Moodie explains. “Sword of Light, who won a (Group Three) Blue Diamond Preview and finished third in the (Group Two) Tranquil Star in September is from the first batch and now Arctic Angel has popped up from the next lot.

“Arctic Angel’s dam, Icy Maiden, is very dear to us of course. Aside from producing Arctic Angel, she is also the dam of a full brother in Iceflow who was second in last year’s Maribyrnong Trial Stakes.

“Icy Maiden is also a granddaughter of Polar Rose, the dam of Arctic Scent, a home-bred who won the Caulfield Cup, Queensland Oaks and a Feehan for us back in the mid 1990s.

“Polar Rose was actually one of our first horses … and that really is taking us back. David liked her because she was a half sister to Appleby Fair that we had purchased at a Tamworth sale in 1988. There’s been lot of horses since then!”

Berrill owns a half sister to Arctic Scent in Miss Petrov whom she secured for just $400 at a mixed sale four years ago.

“I used to work for Henry Field at Newgate Farm and helped prep Rhineback for the Easter Yearling Sale where he made $200,000,” Berrill points out. “He never raced but was always a lovely type and when the opportunity came up to purchase him, I jumped at it.

“It’s a very good family: Encosta de Lago is really proving himself as a sire of sires, while Rhineback is out of the Group One winning Danehill mare, Aqua d’Amore. Timely too, I guess, in that Aqua d’Amore is a three quarter sister to Petrology, who won the 2014 Sandown Guineas.

“Unfortunately we didn’t get Rhineback until the November (2014) and he covered just five mares. One missed, one slipped, another mare died in foal, another mare’s foal died and, sadly, Miss Petrov’s Rhineback colt, was killed in a floating accident.

“I said to my partner, ‘these are testing times’ or words to that effect, but things have looked up since and, after people have had a good look at what is effectively his second crop of foals – now yearlings – the word of mouth is working and he’ll end up covering around 40 mares this spring.

“One of them will be Miss Petrov, so if Arctic Angel keeps winning, that’ll be just fine by me!”

HOOFNOTE: First run in 1946, the Merson Cooper has been won by a number of outstanding juveniles including Rancher, Biscay, Star Shower, Biscay and Blazing Saddles, along with Golden Slipper winners Vain, Vivarchi, Storm Queen and Pago Pago. It might be a long time between Merson Cooper/Golden Slipper drinks, but the Moodies will be hoping that Arctic Angel can end the drought. There’s a nice spot on the trophy shelf next to Crystal Lily’s Slipper.