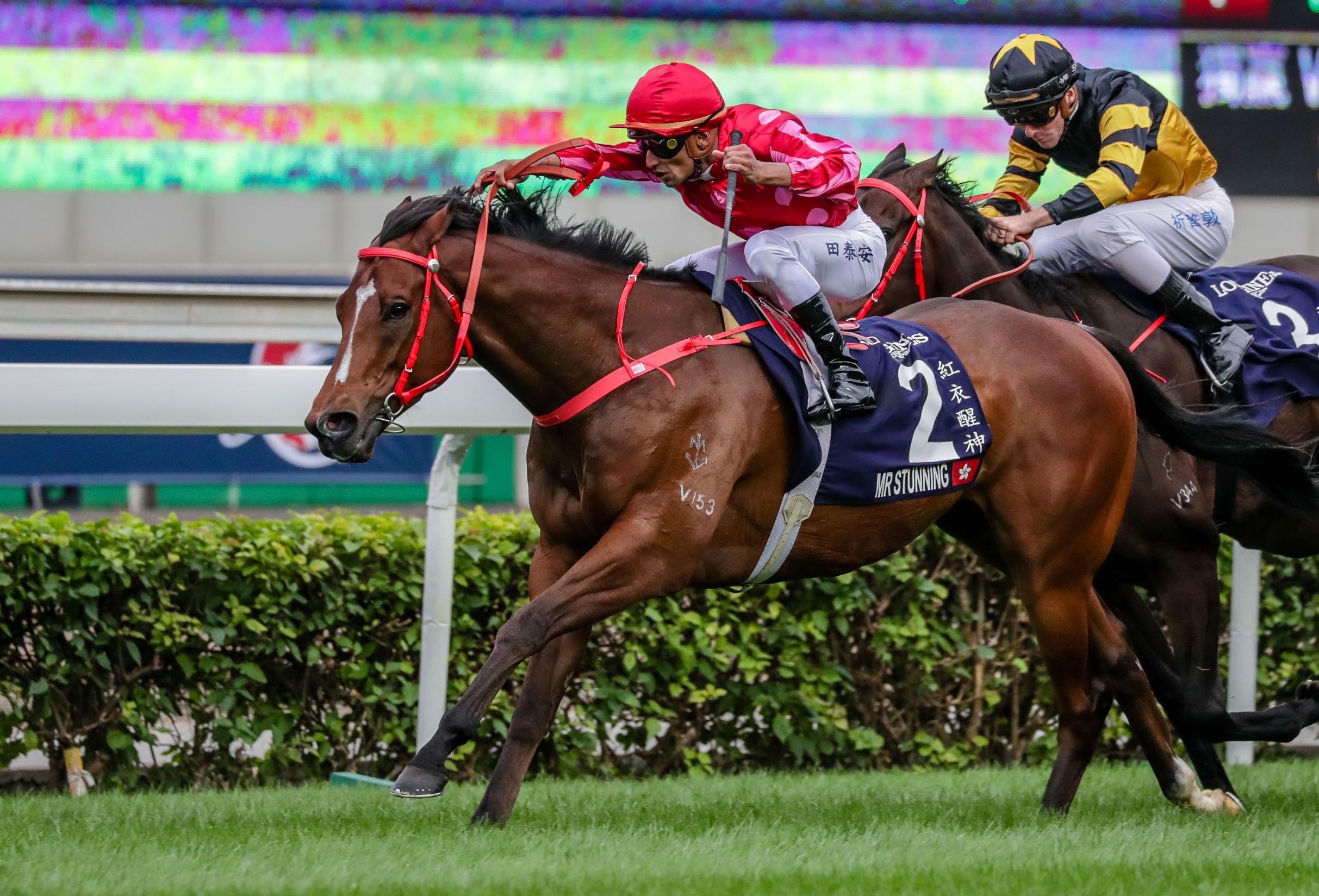 It really should have served as some kind of omen …

On the Sunday, Mr Stunning would again be lining up in the Sprint, seeking to become the 13th Australian-bred horse in the 20 runnings of the race to capture the international contest: and the fourth, alongside Sacred Kingdom (’09 & ’07), Silent Witness (’04 & ’03) and Falvelon (’01 & ’00), to win multiple Sprints.

Facing five other Australian-breds in Sunday’s Group One, including favourite, Hot King Prawn, Mr Stunning produced an absolute blinder to win by three quarters of a length from DP Pin and Beat The Clock.

It’s certainly been a star-studded career for Mr Stunning who is among 151 stakes winners (11 Group One winners) for Darley’s Exceed And Excel, and is from the Dayjur mare, With Fervour. A half sister to 5-time Group One winner, With Anticipation, With Fervour only produced one more foal after Mr Stunning – an unraced Mossman mare, With Faith – before dying in October 2014.

An instant success in Hong Kong, winning three of his first four starts, Mr Stunning was named Champion Griffin in 2015-16, but since then has won two Group Ones, three Group Twos and thrice been Group One placed. Overall, Mr Stunning has won 11 of 22 starts with eight further placings and nearly $HK46 million (approx. $A8.2 million).

Not bad for a horse that was originally sold by Makybe for $110,000 at the 2013 Inglis Great Southern Weanling Sale.

“I’m very happy … it took me a long time to get a trainers’ licence, so I need to try my best to keep going and train more Group One winners,” Lor enthused. “I think John (who trained the runnerup and third horse) might also be happy because I worked for him and he was a great boss.”

Makybe’s manager, Joe Murray, remembers Mr Stunning as a foal and, while perhaps not exactly stunning early on, he was a lovely type regardless.

“He (Mr Stunning) was foaled down at Yallambee Stud and was a bit light boned, but very correct,” Murray recalls. “He wasn’t forward enough for the Magic Millions Sale and wouldn’t have got into Easter, so it was decided to sell him as a weanling. Tony (Santic) wasn’t going to give him away though and set a reserve of $90,000.

“The mare (With Fervour) didn’t get back in foal and we were downsizing at the time so the decision was made to sell her too (With Fervour was sold for $6,000 at the 2013 Inglis Broodmare Sale).

“It was a fantastic result on Sunday though and good luck to the owners: he really has turned into something special.”

As for the farm’s famous namesake, Makybe Diva has an unraced 2YO filly by Brazen Beau, and produced a Written Tycoon filly in September.

“The filly is an absolute standout,” Murray adds. “Could not be happier: she has all the Written Tycoon markings, right down to the white socks and we’re all pretty excited.”

Having run third in the Group One Queen Elizabeth Cup earlier in the year, Eagle Way produced a terrific fourth in Sunday’s Group One Longines Hong Kong Vase, while Ruthven – now with Mr Stunning’s trainer Frankie Lor – ran fourth in the Hong Kong Derby in March before also competing in Sunday’s Sprint.

Dark Dream, meanwhile, had his first start in Hong Kong on Sunday (and first run since the Queensland Derby), finishing a long neck third in the Maurice Handicap.