‘Rags’ To Riches … It’s Been Some Journey 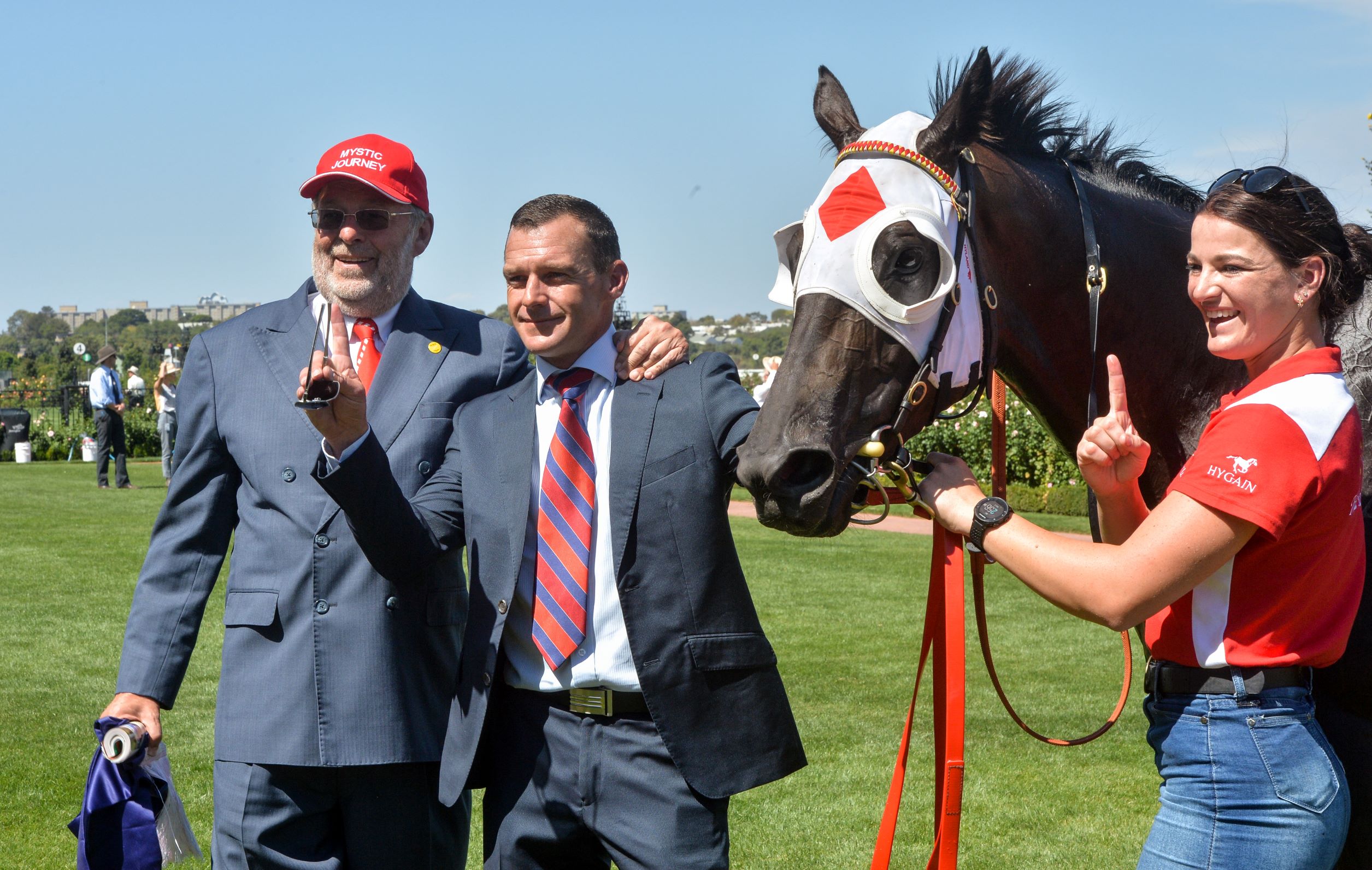 Imagine purchasing a yearling for $11,000 at the Tasmanian Magic Millions Yearling Sale and, just on two years later, cheer on as said filly wins the $1 million Group One Australian Guineas over 1600m at Flemington.

The stuff of dreams? You betcha.

Mystic Journey is, in every sense of the word, the pride of the Apple Isle. While admittedly bred by Victorian based Ralph Zito, along with his wife Peta, Joe and Rhonda Cichello and John and Diane Button, the filly’s dam, White Gold, has spent the majority of her life in Tassie, while Mystic Journey’s sire, Needs Further, stands at one of Tasmania’s oldest farms, Armidale Stud.

She backed up with a comfortable victory in the Group Two Aquis Farm Fillies Classic at Moonee Valley on Cox Plate day before returning south.

Then, on the back of a stakes win in Hobart last month, she was sent out a deserved favourite for the Australian Guineas, winning with over two lengths to spare. No wonder they’re calling her the Winx of Tasmania!
The Guineas also took her earnings to $1,012,600 and she will next appear in the $5 million All-Star Mile at Flemington on 16 March.

“We thought she was a lovely, cheap little filly who would go and do a job for us, but we never thought in our wildest dreams that it would end up in a Group One at Flemington!,” an elated Trinder reveals. “This was my fiancée, Leah’s pick at the sales … she loved her.”

As does Wayne Roser, a major client of Trinder who races Mystic Journey in white, red diamond and sleeves silks.

A former barrister in NSW, Roser began sending horses to Trinder around seven years ago and the pair’s success stories include 10-time winner, Valiant Warrior.

Quite a few horses but nothing too earth shattering … until now.

But get this, Roser returned to the scene of his climb last year where he purchased another Needs Further filly, this one out of a half sister to Mystic Journey, for $28,000, at the Tasmanian Magic Millions Yearling Sale.

Naming her Mystical Pursuit, the filly has won four from four – including the Listed pair of Elwick Stakes and Gold Sovereign – for a tick over $200,000 in prizemoney.

(Mystical Pursuit was also bred by Zito and co. and, like Mystic Journey, was sold by Armidale Stud: “I’m fairly certain that Wayne has only purchased the three yearlings from us … one is a Group One winner, the other is likely to be Tasmania’s Champion 2YO, while he bought a Dissident filly for $30,000 at the Tassie sale last month,” Armidale’s David Whishaw explains. “Probably be a good idea to keep your eye on the Dissident filly!”)

As for Zito and crew, if they’re dirty on only getting $11,000 for their yearling, they’ve done a good job of hiding the hurt.

A devotee of line breeding, Zito is quick to point out that they while they retain quite a few of what they breed, when they do send one to the sales they like to be known as sellers.

“We’re only a relatively small operation with half a dozen mares but we’ve managed to breed some 80 winners in the last 20 years,” Zito enthused. “People might think I regret selling her but there are no guarantees in this game and things might not have worked out if I’d kept her.

“I focus more on what a great result it is for Tasmania. Mystic Journey’s dam, White Gold, produced a lovely Fighting Sun filly last spring and is in foal to Fiorente, but will be heading back to Armidale Stud shortly to be again covered by Needs Further.

“He’s a serious horse that Needs Further. Hopefully the rise and rise of Mystic Journey, and Mystical Pursuit for that matter, will bring more focus on the stallion from mainland breeders.”

Remarkably, Mystic Journey becomes the first Tasmanian trained horse to win a Group One on the Australian mainland since Malua’s Australian Cup in 1886 – nearly 133 years ago.

“I’ve been confident for weeks that Mystic Journey would run well in the Australian Guineas and I started phoning around to a lot of people I know in the industry, asking them about the last Tassie trained horse to win a Group One,” David Whishaw reveals. “I kept getting ‘not in my lifetime’ and I even rang a couple of people in their 80s who said the same thing … ‘not in my lifetime’.

(Ironically, Adam Trinder’s grandfather Ray had Piping Lane but handed the horse over to Victorian trainer George Hanlon prior to the galloper’s victory in the 1972 Melbourne Cup).

“I can’t even begin to tell you how excited we all are. It’s a real shot in the arm for the local breeding industry. It’s great for Adam Trinder, great for Wayne Roser, great for the breeders who continue to support Tasmania and great for our stallion Needs Further.

“Needs Further’s oldest are now 4YOs and he’s had a stakes winner with every crop: Pateena Arena, Mystic Journey and Mystical Pursuit, have won the Elwick Stakes in successive years and have nine stakes victories between them.

“Tasmania is only a small industry with not a lot of mares go around, but Needs Further is really starting to hit his straps and wins like that on Saturday will draw a lot more attention from other states.

“His stablemate, Alpine Eagle has got some very nice foals on the ground, so it’s all great for us at the moment and, I’m happy to say, absolutely tremendous for Tasmania.

“They say it’s all about the journey and not the destination and the way that filly won on the weekend, it’s turning out to be a bloody good journey!”