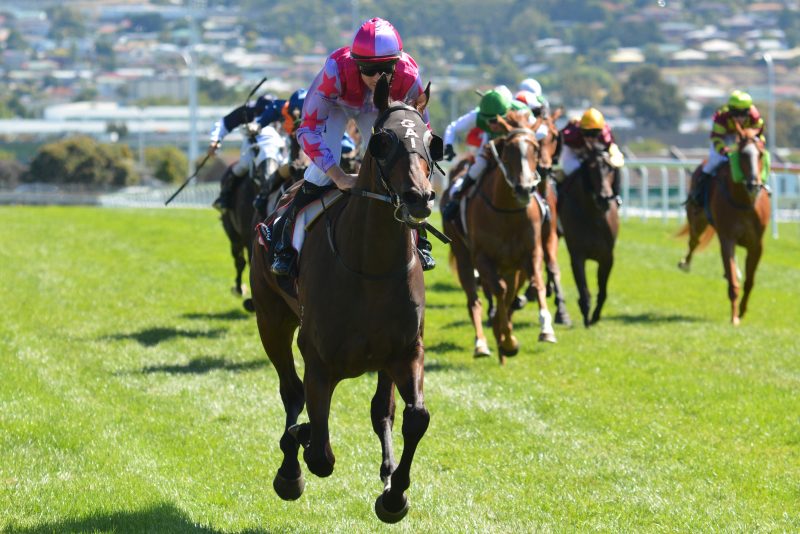 It was some win!

Even when turning for home in the Listed Kevin Sharkie Hobart Guineas (2100m) on Sunday, the Gai Waterhouse/Adrian Bott trained, Northwest Passage, was already well and truly en route for black type glory and left backers with no doubts as to the cut of his jib.

Ultimately, the winning margin was 7.5 lengths and the So You Think 3YO clearly has a promising future.

Cheering on was Morning Rise Stud’s principal, Robert McClure, who bred Northwest Passage at his Mornington Peninsula property and offered the then colt through Newgate Farm’s draft at the 2015 Inglis Australian Easter Yearling Sale.

“We took some very good horses up to Easter that year,” McClure explains. “(Group Two placed) So Si Bon was one, California Nike another and, now, Northwest Passage … all of them winners.

“Unfortunately, Northwest Passage was passed in due to some small x-ray issues, but we brought him back home for a couple of months and Gai Waterhouse then rang me up to ask about him and ended up buying the horse.

“He’s certainly turning out to be worth the wait. That was a very good win in Hobart and hopefully there’s a lot more in store.

“Morning Rise has around 20 mares, some of them up at Coolmore and the others on my property (77 acres at Red Hill), including Northwest Passage’s dam, Danevade.

“She’s currently in foal to Vancouver and has a yearling colt by Pierro that was passed in at the Gold Coast Magic Millions recently. There’s nothing wrong with the Pierro: it might have paid us to hold him back until Easter to let him grow out a bit more, given that the horses out of that mare seem to take a little longer to mature. It doesn’t matter so much though when they turn out like Northwest Passage!”

It could be a case of history repeating itself and after the demolition job Northwest Passage pulled on Sunday, McClure could well end up fielding a few calls about the Pierro colt this week.

Northwest Passage has now won three of his four outings (including a third at Randwick) and $119,000: a pot he is tipped to add to substantially when he next runs in the Listed Tasmanian Derby on 3 February.

Naturally enough, Coolmore Australia – which stands 10-time Group One winner So You Think – was mightily pleased with Northwest Passage’s effort.

“We couldn’t be happier with how the progeny of So You Think are going and he looks to have an exciting autumn in front of him,” Coolmore Australia’s Sales, Marketing & Racing Manager, Sebastian Hutch points out.

“Northwest Passage looks a Group One Derby prospect, while the likes of So Si Bon, Kaching and Inference are gearing up for Group One Guineas options in Sydney and Melbourne.

“And just for good measure, the likes of La Diosa, who is already a Group One winner, So Belle, Smart As You Think and Seracena are all genuine Oaks’ prospects in Sydney and Adelaide.

“While a number of his progeny have shown class over sprint trips, they are, as expected, really starting to excel given time to mature and over a little more distance. One thing is for sure, his progeny appear to be sharing their sire’s appetite for competition.”