Not A Single Doubt About Vinery Winner 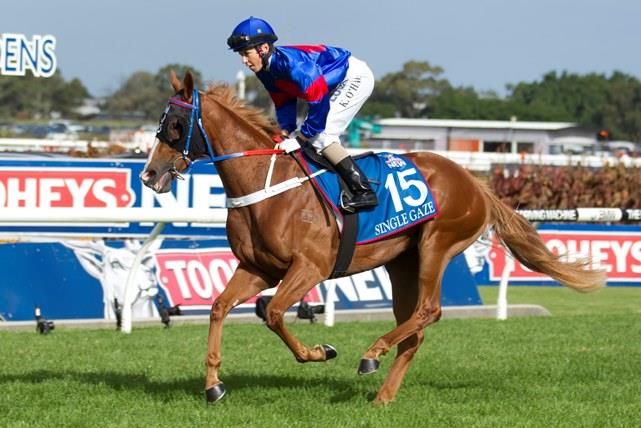 Sometimes it only takes a single gaze and, while Canberra trainer, Nick Olive, didn’t exactly say it was love at first sight, he sure liked the way the Not A Single Doubt filly moved at the 2014 Gold Coast Magic Millions.

Entering the ring early in the piece – Lot 14 – the filly was passed in, but Olive soon found vendor, Redbank North, to come to an arrangement.

Although Redbank North principal, Jamie Middleton, was the man in the middle, he represented four other co-breeders, when the deal was struck, he and fellow breeder, Wayne Oxford, decided to keep a share in the filly.

That proved to be a masterstroke on Saturday when the filly, now racing as Single Gaze, took out the $500,000 Vinery Stud Stakes over 2000m at Rosehill.

It was the first Group One success for the popular trainer who was at a loss for words immediately after the race and was still somewhere up on cloud nine the morning after.

“It’s every trainer’s dream to win a Group One and to do it with this team of owners is something special,” Olive enthused. “They are all really good mates and and I speak to them nearly every day.”

With Single Gaze winning the Group Three Arrowfield Kembla Grange Classic leading into the Vinery, Olive was a little surprised that they offered as much as $12 for the filly, but as jockey Kathy O’Hara declared in the immediate aftermath, “there isn’t much of her, but she (Single Gaze) is all heart”.

Meanwhile, Middleton, whose Redbank North property caters for around 25 of its own and clients’ mares, is also a huge fan of Not A Single Doubt.

“We sent Single Gaze’s dam (Redaluca’s Gaze) to Snitzel for the first couple of seasons and then to Not A Single Doubt because of the Danehill factor, but then decided to send her to Helenus after that,” Middleton explains.

“The Helenus foal, a filly called Red Heat, trialled very well recently for Keith Dryden and is definitely one to watch … but after that change in direction, we then decided to swing back to the Danehill line, sending Redaluca’s Gaze to Commands.

“The Commands filly was sold on the Gold Coast in January for $280,000, but this time all five breeders (Redbank, Oxford, Arthur Mountier, Mark Cullen and Albert Tory) decided to keep a share!”

And who do you think Redaluca’s Gaze visited last spring? There’s Not A Single Doubt you’ll guess the answer to that question.