Oh Susanna, won’t you (Street) Cry for me 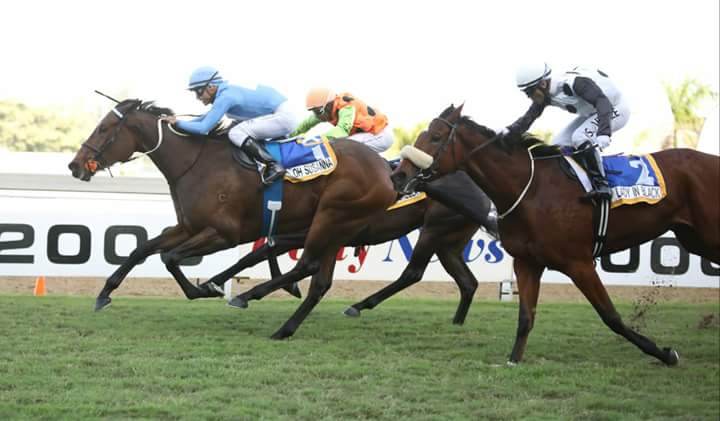 What an amazing racehorse. Australian-bred, South African trained Oh Susanna (Street Cry) won her third straight Group One race on Saturday, capturing the Woolavington 2000 at Greyville, lugging 60 kilos and giving plenty when challenged near the wire.

Now, while three Group One wins is hardly unique, the fact that Oh Susanna has won (as the race name would suggest) over 2000m in her first run for 126 days, is really something special.

Despite the magnitude of the task, Oh Susanna was sent out a raging hot favourite for the Woolavington 2000. Nevertheless, she had supporters on the edge of their seats for most the straight as two challengers loomed menacingly.

The Coolmore Australia raised Oh Susanna fought back strongly however to get the verdict, much to the relief of Justin Snaith, who trains the filly on behalf of breeder Drakenstein Stud.

“To come out in a Group One over 2000m and win, after a rest, shows she is very good and I’m over the moon,” Snaith enthused.

“When she looked under pressure she found reserves and that’s what good horses do.”

Racing for the first time as a 2YO in April last year, Oh Susanna had won only one of six outings before producing a second in the Group One Kenilworth Paddock Stakes in December. She hasn’t been out of the winners’ circle since.

Oh Susanna is among 20 Group One winners (118 stakes winners overall) for Darley’s former great sire Street Cry. While his sons such as Street Sense, Street Boss, Whobegotyou and Shocking have all covered themselves with glory, the stallion will surely go down in history as one of the truly remarkable sources of female talent, given that he’s the sire of both Winx (25 wins in a row) and Zenyatta (19 from 20).

Oh Susanna is out of the Touch Gold mare, Sharp Susan, the winner of six in North America including the Group Two Lake Placid Stakes and is a close relation to Group One winners Spring At Last, Sharp Lisa and Galileo’s 2017 Group One ATC Metropolitan winner Foundry.

The dam was originally purchased out of a United States sale for $2,000,000 by Australian interests in 2008. Gaynor Rupert’s Drakenstein Stud would then buy Sharp Susan for $1,050,000 at the 2012 Inglis Easter Broodmare Sale.
Unfortunately, Sharp Susan’s first foal for Drakenstein – a Street Cry colt – would die at an early age. Her next foal, a Bernardini filly, would race in South Africa as Biblical Susan.

“Darley was kind enough to offer us a free return to Street Cry and that’s when the mare came up with Oh Susanna,” Drakenstein’s Racing Manager, Kevin Sommerville points out.

“Gaynor Rupert is passionate about her breeding and racing and is very hands on, particularly when it comes to the purchase of bloodstock and planning of matings.

“It’s Drakenstein policy to sell the colts and race the fillies and that’s definitely worked in our favour with Oh Susanna!

“Gaynor has a real vision for the industry and has steadily built up her broodmare band from just a couple of mares when Drakenstein started (in the mid 2000s), to around 95 which are currently on the books.

“Breeding horses in Australia and then bringing them across to South Africa can be an expensive exercise, but when you have results like this, it’s all worthwhile.”

Sharp Susan was exported to Ireland in November 2016 but has a 2YO Exceed And Excel colt named Signore Fox in the Team Snowden stables having been purchased for $300,000 at the 2017 Inglis Australian Easter Yearling Sale. Her final Australian born foal, a Fastnet Rock yearling filly named Fast Susan, has been retained to race by Drakenstein Stud.

The General salutes in Malaysia

Australian bred gelding Volcanic General has again shown he is one of the most consistent gallopers in Malaysia with another emphatic victory on Sunday … this time in the Listed (Malaysian Group One) Perak Gold Vase over 1100m.

He raced in Australia originally as Volcanic Ash for the Mick Price yard and won five races – three in Melbourne – and has now raced eight times in Malaysia for four wins, all at stakes level, and three seconds.

One of 15 stakes winners for the Sun Stud based Magnus, Volcanic General was bred by Rob Crabtree’s Dorrington Farm and is out of the highly prolific Silverbeat.

A daughter of Distant Music, Silverbeat has produced four winners – all of them at black type level: Melbourne Group Two winners Upbeat and Bella Martini, along with Volcanic General’s brother, the Adelaide Guineas winner, Alpha Beat.

Silverbeat’s Snitzel yearling was sold at the Inglis Easter Yearling Sale this year for $700,000, while the mare was covered last spring by Fastnet Rock.