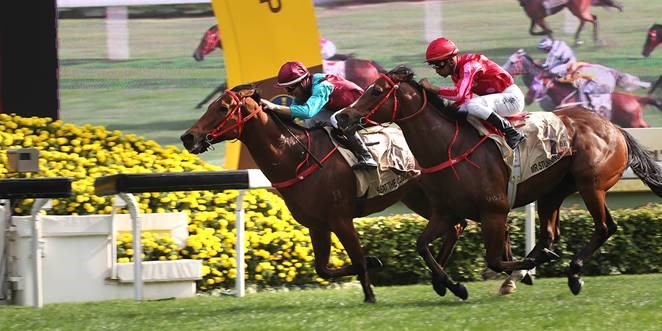 Australian breeding has had another timely boost on the international stage with Beat The Clock leading home an Aussie trifecta in Sunday’s Group One Centenary Sprint Cup at Hong Kong’s Sha Tin racecourse.

It provided Australian-bred racehorses with a Group One double on the weekend after Enzo’s Lad went back to back in the Telegraph Handicap at Trentham in New Zealand on Saturday.

And just as the finish to the Telegraph proved to be a thriller, Beat The Clock held off the fast finishing Mr Stunning in the Centenary Sprint, while Winner’s Way filled third.

Australian-breds such as Silent Witness (2004-05), Scintillation (2006-07) and Sacred Kingdom (2010-11) have all won multiple Centenary Sprints but few are likely to forget the deeds of Beat The Clock on Sunday.

Sitting just off the pace, Beat The Clock stormed to the lead at the 150m mark, but then had to pull down deep to edge out Mr Stunning, who had relegated Beat The Clock to third when they last met in the Group One Longines Hong Kong Sprint last month.

The Centenary Sprint is Beat The Clock’s first success at Group One level, but the Hinchinbrook 5YO has been the model of consistency for trainer John Size, winning seven from 18, along with 11 placings and nearly HK$23 million (approx. A$4.1 million) … never finishing out of the top three.

“Beat The Clock has taken his time to break through to Group One level but he always promised to do that and on Sunday he managed to salute,” a delighted John Size points out, while champion jockey, Joao Moreira enthused “he (Beat The Clock) has that burst of speed which only the good horses have”.

The third Group One winner for ill-fated Yarraman Park Stud stallion, Hinchinbrook (16 stakes winners overall), Beat The Clock is out of Group placed 2YO, Flion Fenena, and is closely related to multiple Group winner Silent Impact.

Flion Fenena has a weanling filly by Your Song and was covered last spring by Smart Missile.

Bred in NSW by Jilly Henderson, Beat The Clock would be offered by Yarraman Park Stud at the 2015 Inglis Melbourne Premier Yearling Sale where he was knocked down to Prima Park Bloodstock for $70,000.

Beat The Clock would ultimately be pinhooked at the 2015 New Zealand 2YO Ready To Run Sale where he was, somewhat ironically, knocked down to Bill Mitchell for NZ$200,000.

Mitchell, whose brothers Arthur and Harry run Yarraman Park Stud, has had a close association with Hinchinbrook and was attracted to Beat The Clock from early on.

“I loved him as a yearling, but we couldn’t get him that day,” Mitchell explains. “But we got him at the Ready To Run and, by that time Hinchinbrook was really hitting his straps.”

HOOFNOTE: A $110,000 graduate of the 2013 Inglis Weanling Sale, Mr Stunning is by Darley’s Exceed And Excel, while Winner’s Way – a Group winner in Hong Kong last year – is by Rosemont Stud stallion, Starcraft, and was sold for $55,000 at the 2014 Magic Millions National Yearling Sale. It pays to buy Australian!