Glamorous Pinot Shows All Is Well 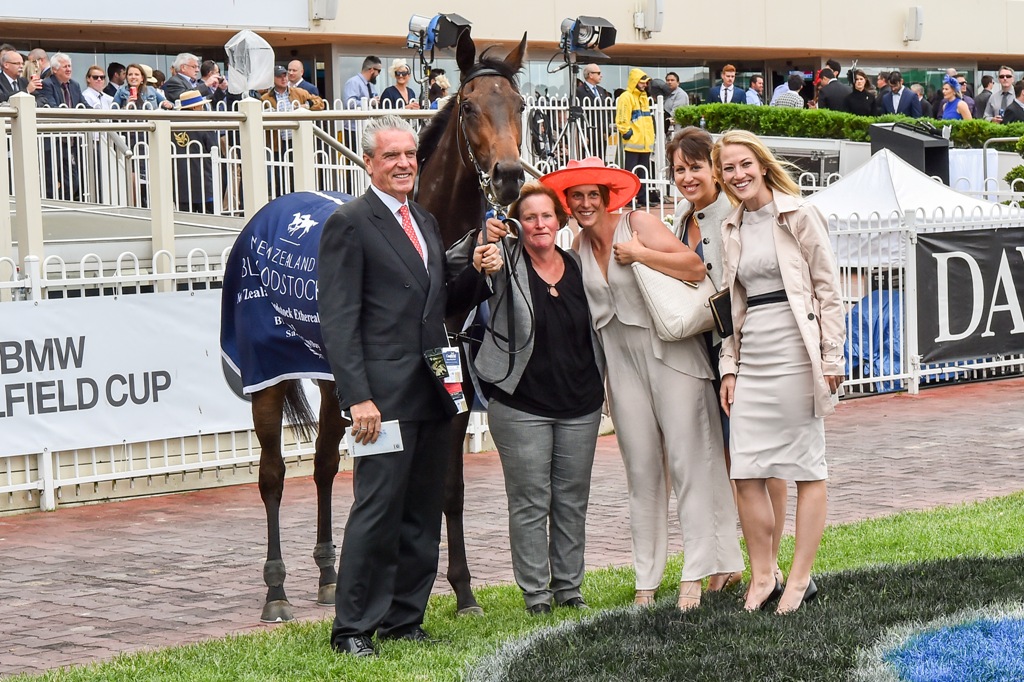 The ‘global glamour’ of Australian racing was on full display at Caulfield on Saturday with nine of the 10 races carrying black type status: headlined by the $3 million BMW Caulfield Cup.

All of the races were won by Australian bred racehorses under the tutelage of Australian bred trainers, but for two of the Group races at least, there was a distinct international flavour.

The irrepressible Gai Waterhouse was front and centre at Caulfield as, firstly, exciting 3YO filly, Pinot, produced a vintage display to capture the Group Three Ethereal Stakes over 2000m, only to be followed up in the program’s penultimate event, by Global Glamour’s nail biter in the Group Two Tristarc Stakes.

Pinot will now attempt to join the Lasqueti Spirits, Jamekas and Set Squares of this world by capturing the Group One $1 million VRC Kennedy Oaks over 2500m at Flemington on 9 November, while Global Glamour is next due to be sighted in the Group One Myer Classic at Flemington come Saturday week.

Yet, while ‘First Lady of Racing’ Waterhouse has an impeccable colonial pedigree – being by Jembaicumbene (NSW) foaled legend, TJ Smith – she has been more than ably assisted by ‘internationals’ as to the purchase of both Pinot and Global Glamour.

First off, enter everyone’s favourite South African import, James Bester, a renowned bloodstock agent in Australia for over three decades, who is in both the ownership of Pinot and personally selected, Global Glamour – on behalf of the It’s All About The Girls syndicates – for $65,000 at the 2015 Gold Coast Magic Millions Yearling Sale.

While the Global Glamour ownership group is well documented – 40 women from seven countries – courtesy of the mare’s dual Group One victories, Pinot is yet to climb those dizzying heights and her connections are considerably less voluminous.

Bred by Keith Biggs and purchased from the Coolmore Australia draft at the 2016 Inglis Australian Easter Yearling Sale, Pinot was officially knocked down to the relatively unknown Eclipse Thoroughbred Partners for $200,000.

Eclipse’s principal, Aron Wellman is a highly regarded figure in North American racing, who was making his first trip to Australia to attend Easter, saying at the time he was just at the sale for a “look”.

Clearly he hadn’t encountered anyone with the persuasive powers of our first lady of racing, and next thing you know, he’s the new owner of a Pierro filly from the Group One Australian Oaks winner, Dizelle.

Joining Wellman in the ownership was Waterhouse’s daughter, Kate, Bester and Newgate Farm.

Bester, who is currently in China where he is a keynote speaker at a major industry summit, said he had a long association with both Pinot’s breeder and the filly’s family.

“Keith (Biggs) consulted with me on the mating of Pierro to Pinot’s mum, Dizelle, but I also was involved with the matings of Dizelle (by Zabeel) and her dam, Danelagh (by Danehill),” Bester explains.

“I absolutely loved the filly and if there is one thing we all agreed upon … Aron, Gai, Keith and myself, was that none of us thought she would go that cheaply.

“Aron was in for 50% and Newgate (and SF Bloodstock) took 25%, so I asked Gai if I could take the other 25%. She wanted to get Kate involved in the filly so I took what was left.

“I thought that I may as well get in the ownership of such a nice filly, instead of watching on – like I did with Dizelle and Danelagh – from afar.”

Bester is now hoping that Pinot can emulate 1996 Australian Oaks winner, Kenbelle – a Kenmare filly he purchased for $18,000 as a yearling and raced with friends – by winning a second blue riband.

Meanwhile, Wellman wasn’t at Flemington for the Ethereal Stakes, but was over the moon when contacted by Alan Carasso of Thoroughbred Daily News: “It was great to see her do that,” Wellman enthused. “The wide draw (15 of 16) was certainly my biggest concern going into the race.

“However, Gai is the self-proclaimed most optimistic human being and she was unconcerned, because the filly was doing so well.

“The one thing that we have always been very confident with this filly is her endurance and stamina to get the Oaks distance (2500m) and they weren’t gaining on her that much (in the Ethereal).”

Wellman will remain in the States until after the Breeders’ Cup at Del Mar on 3-4 November, but is then odds on to grab a flight to Melbourne for the Oaks.

“To win a race like the Oaks would be a great honour and for it to be Gai’s first Oaks, that would just amplify the experience. If it weren’t for her, we wouldn’t have taken the plunge. She deserves all the credit for putting us in this position,” Wellman adds. “Gai has been spot on about this filly all season long … she’s made every right move.”

Waterhouse clearly agrees and was deservedly soaking up the attention on Saturday: “When Pinot came down from Sydney six weeks ago I was determined to win the VRC Oaks, it’s the one thing I want to do.

“I was on the phone to Aron straight after the race and he said ‘we’re coming, we’re coming’ when I told him it was full speed ahead for the Oaks, so I just said ‘fill the plane!’.”

While it’s difficult to match Waterhouse’s enthusiam, Team Coolmore made a good shot of it and did plenty of cheering too as Pinot crossed the line on Saturday.

“That win by Pinot was very impressive and a fantastic result for her breeders Keith Biggs, John Jones and Rod Russell, who have a beautiful Fastnet Rock half-sister to Pinot to offer at the Inglis Easter Sale next April,” Coolmore Australia’s Stud Manager, Jim Carey, reveals.

“As for Pinot, she’s a third generation Group winner to have been raised at Coolmore, following on from (granddam) Danelagh (Group One Blue Diamond) and Dizelle.

“There are just so many great stories to come from the emergence of this filly, particularly the involvement of Aron Wellman, which will hopefully encourage like-minded international investors to participate further in the Australian industry.

“Naturally, it’s also another feather in the cap for Pierro, who is enjoying a great spring and is developing into the top-class stallion that we all expected he would be.”