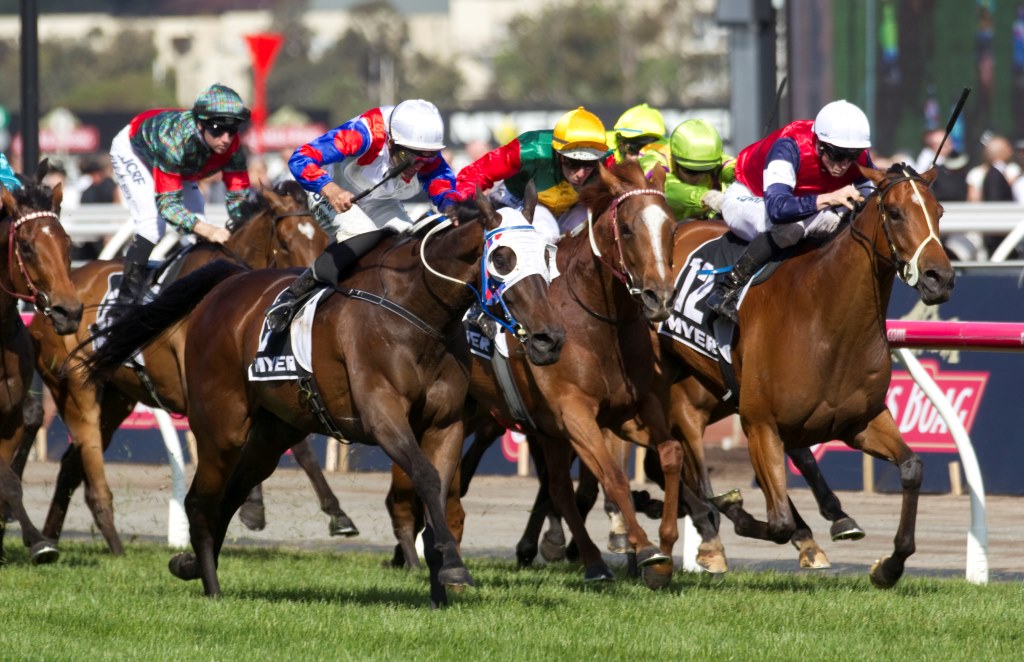 Not only were owners Phil Sly and Katsumi Yoshida leading the cheering on Saturday as Street Sense mare Politeness charged down the outside to record victory in the Group 1 Myer Classic, but Sledmere Stud’s Catriona and Royston Murphy were also celebrating the victory.

Having sold Politeness as a yearling for $115,000 at the 2012 Inglis Easter Yearling Sale, before Saturday’s victory, Politeness had recorded victory at black type level on five occasions with Group 1 success eluding the highly talented mare.

Beaten less than two lengths in two Group 1 races, including the Myer Classic 12 months prior behind Bonaria, Politeness had been in red hot form this time in, winning both her starts over 1200m at Group 3 level.

Settling back in the field, the mare was given a sweet ride by jockey Dwayne Dunn before she ambled up on the outside, hitting the lead at the 200m mark before pulling away for an impressive three-quarter length victory over High Chaparral’s Group 1 winning daughter Fenway.

Politeness charges to victory in the Group 1 Myer Classic (1600m)

The story of Politeness began back in 2010 when Catriona and husband Royston headed to the Magic Millions National Broodmare Sale.

Secured from the draft of Darley for only $55,000 with a positive to Street Sense, Catriona had been given strict instructions by her Aunt, then Sledmere Stud owner Ann Raymond, to purchase a mare by Zabeel.

“She had her heart set on getting a Zabeel mare and Berengaria was not really on our radar until we pulled her out for myself and Royston.”

“I was straight on the phone to her (Raymond) and explained that we’d found a beautiful mare but she wasn’t by Zabeel. After a long time convincing her that she was the most suitable mare for her, she agreed to buy her.”

A young mare at the time of purchase, Berengaria quickly became a favourite of Miss Raymond.

With the Street Sense filly heading to the Inglis Easter Yearling Sale, she was purchased by respected judges Troy Corstens and Justin Bahen and sent to the stable of Robert Smerdon – where the rest is now just part of the story.

Producing a filly by Denman two seasons later, that filly also headed to Easter, where the China Horse Club were the successful bidders and twelve months later Cameron Cooke Bloodstock purchased the next offering, a filly by Group 1 Golden Slipper winner Sebring.

Named More Bubbles, the Sebring filly is in the stable of Smerdon, and by all reports the filly has done everything right so far and although it is still early stages for the filly, the reports are very positive.

The next foal from Berengaria, a Street Cry three-quarter brother to Politeness will also head to the Easter Yearling Sale. Now a relation to a Group 1 winner, Catriona is really looking forward to taking the colt to the sale.

“He is not too dissimilar to Politeness; he is a very attractive colt with good size and scope.”

“Very much like his big sister in that he has an exceptional athletic walk…a real gentleman to handle.”

With Street Cry, the sire of recent record breaking Group 1 W.S. Cox Plate Winx no longer with us, this colt is from his final crop, and with any luck could be a stallion prospect down the track.

Berengaria produced a colt by Arrowfield Stud’s Snitzel the morning of Politeness’ Group 3 How Now Stakes victory, and was described as, “another cracking sort from the mare and has all the qualities in him that will make him an athlete.”

Commands mare Berengaria pictured with her Snitzel colt, the morning of the Group 1 Myer Classic

“He has quiet similar markings to his dam Berengaria and overall is a very nice colt.” stated Catriona.

With Politeness set to head to Japan to join Mr Yoshida’s lucrative broodmare band, Politeness will be another graduate of Sledmere Stud based overseas.

“Having sold quite a few yearlings in recent years to South African clients, we are really excited by how many of them are performing at stakes level.”

“Anjaal (Lonhro) is a Group 1 performer, while Buckinghampshire (Lonhro) won a Listed race at only his second start and is the only horse to defeat the recently crowned South African Equus Champion 2YO colt Seventh Plain.”

“Another in South Africa looking promising is three-year-old colt Ready To Attack (More Than Ready), a winner of the Group 3 Langerman Handicap. Trainer Justin Snaith has indicated that the colt looks more than capable of holding his own in the upcoming Group 1 Classic races.”