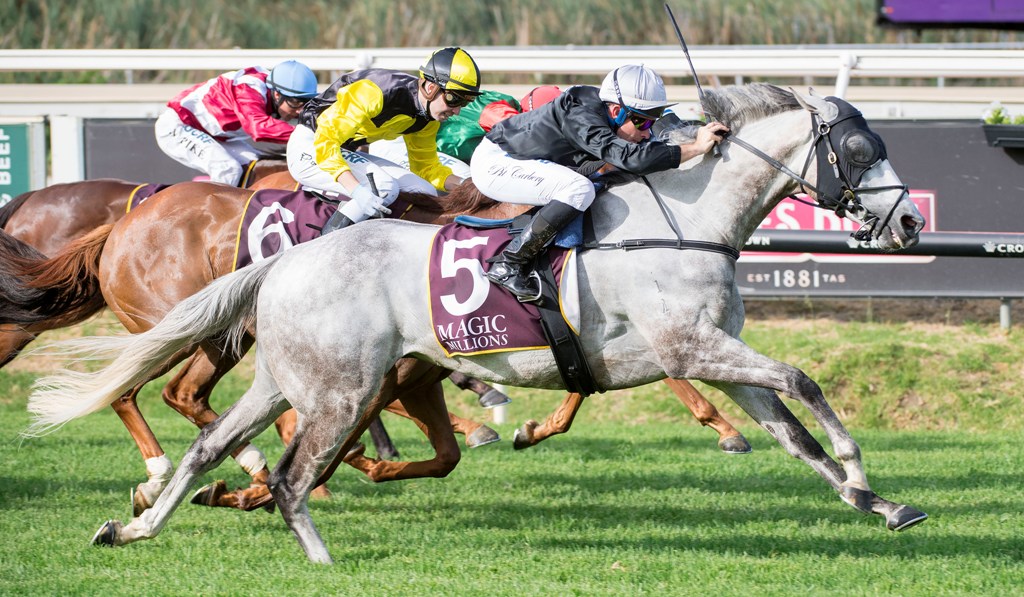 It’s probably something of a misnomer to refer to Saturday’s $1 million Group One Magic Millions Kingston Town Classic winner, Pounamu, as a ‘bridesmaid’.

Sure, the now 6YO didn’t win when racing in NSW for the early part of his career, and he has certainly run a lot of placings: 13 times from 37 starts.

That said, Pounamu has also won nine of his races – including a Group Three Asian Beau  and Listed Detonator – and prior to the Kingston Town, had already banked over $500,000.

“He (Pounamu) was a bit immature when he was with Allan Denham in Sydney, but he still ran second, beaten a neck, in the Group Three Spring Stakes at Newcastle and third in the (Group Three) Gloaming, but I remember looking at him in the mounting yard before the Spring Champion Stakes and he was half the size of the other runners,” Thompson recalls.

“Allan (Denham) thought he would be best trained in a paddock environment rather than from traditional stables so I decided to send him across to Alan (Mathews) in WA.”

Operating at Muchea, some 60 kilometres north of Perth, Mathews is one of the west’s most successful trainers, winning six Perth Cups and a host of stakes races since taking up his licence in the late 1980s.

“I do a lot of work with my horses on the heavy sand,” Mathews explains. “It has become increasingly popular with major stables in the east, but I’ve been doing it for years and horses seem to relish it. That and working them in the bush … around five or six kilometres a day.

Pounamu won his first two starts over 1400m at Ascot after making the shift west, but has also had a frustrating run of seconds too, leading to the bridesmaid tag.

“I had a bit of a chuckle when I saw one of the reports from the Kingston Town,” Thompson points out. “It said that Pounamu ($21) had clearly benefited from an uninterrupted run … that probably makes up for the all the other times he was running up the backsides of other horses! You take the good luck with the bad in this game.”
The NSW based Thompson has raced quite a few horses over the years – both east and west – and had his share of stakes winners along the way, but Pounamu is his first Kingston Town winner and first Group One winner since Diatribe won the 2000 Caulfield Cup and Rosehill Guineas.

“Seventeen years between drinks is quite a while, but as any owner will tell you, those Group Ones don’t come easy,” Thompson adds. “Diatribe was trained by the late, great George Hanlon and he had a lot of success training his horses in a similar environment to that of Alan’s.”

Thompson, who got into the breeding game around 25 years ago, raced Pounamu’s granddam, Lahar, a stakes winner in Sydney but more notably placed in the Doomben Cup, Sydney Cup and third in the 1999 Melbourne Cup behind Rogan Josh.

“She (Lahar) didn’t do much as a broodmare, but one of her three winners was the Street Cry filly, Tangiwai, winner of two and the dam of Pounamu.

“Unfortunately Tangiwai died last year when in foal to So You Think, but she had a couple of Medaglia d’Oro fillies that I’ve kept.”

Pounamu was also a Kingston Town first for Mathews and long-time stable jockey, Patrick Carberry, while the gelded son of former Darley stallion, Authorized, will next appear in the Group Two Ted van Heemst Stakes over 2100m at Ascot on 23 December.

“Everything has gone pretty much according to plan this preparation,” Mathews reveals. “He won the Asian Beau when resuming, ran a good race in the Railway a fortnight ago, won the Kingston Town and now everything from here is a bonus.”

Perhaps a seventh Perth Cup for the trainer?

“Who knows … it will depend a lot on the weight he gets, but based on his effort in the Kingston Town, he’d be definitely in with a shot.”

HOOFNOTE: According to Thompson, whose black colours with prominent silver fern are familiar to racing fans and rugby devotees alike (bloody All Blacks!), Pounamu is named after the Maori term for ‘jade’.

“Race commentators are having a bit of trouble getting the pronunciation right for Pounamu and they can’t seem to get their tongue around Matakanui, a horse of mine that’s with Mick Price,” Thompson says with a laugh. “As long as they keep winning, I really don’t care what they call them!”