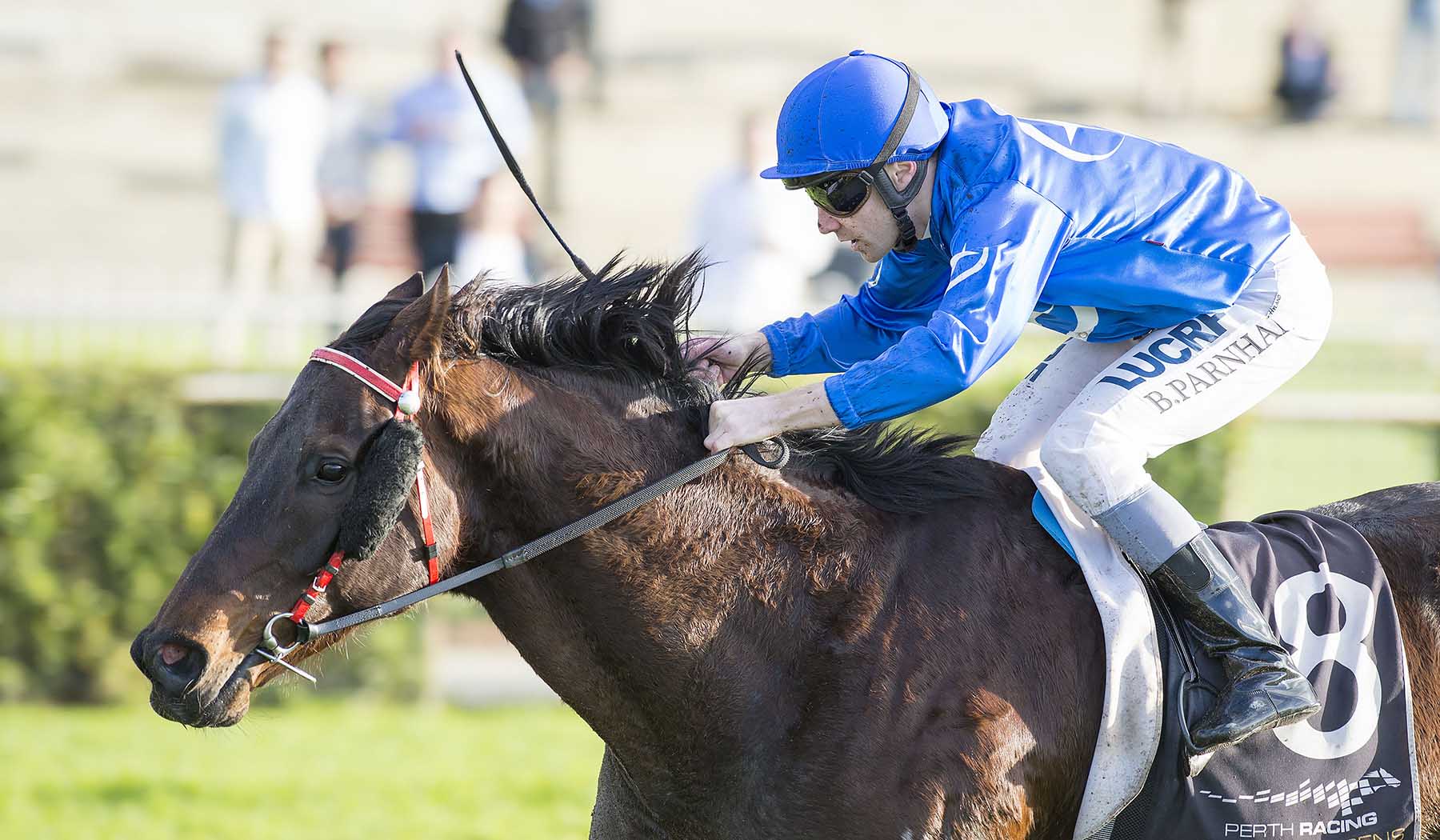 Some might suggest that the speedy Profit Street left his run a little late … metaphorically speaking of course.

After all, jockey Brad Parnham couldn’t have timed his run any better on the Peter & Matt Giadresco trained galloper in Saturday’s Listed HG Bolton Sprint over 1200m at Belmont, summoning a brilliant turn of foot from the flashy bay to win with over a length to spare.

No, it’s more that the rising 6YO was capturing his first black type victory, leaving it until the final stakes race of the 2016/17 Australian racing season to pull it off.

First racing as a spring 3YO with a pair of good seconds, Profit Street next appeared the following winter and quickly produced three wins from four outings.

Since then he has produced another six wins and a bunch of placings for over $300,000 in stakes, but the Bolton was his first tilt at black type.

“Profit Street showed plenty of potential early in his career, but had to be restricted to short campaigns after suffering a life-threatening illness,” co-trainer Matt Giadresco explains. “He’s been great this prep though and is in the best condition of his career … I rode him on Thursday and he just felt brilliant underneath me.”

With one stakes victory under his girth strap, Profit Street is now likely to tackle another in two weeks when he takes on the Listed Belmont Newmarket over 1200m.

And while the Giadrescos and the horse’s owners duly celebrated Profit Street’s success, the victory also capped off a tremendous season for West Australian breeder, Ellie Giles, whose Korilya Stud sold Profit Street for $77,500 at the 2013 Perth Magic Millions Yearling Sale.

Indeed, in 2016/17, Giles has been responsible for the winners of eight black type races: three for Group One William Reid winner, Silent Sedition, three for Man Booker and one each for Quilista and Profit Street.

This places Giles second only to the massive Bob Peters operation in Western Australia and equal third in Australia overall.

Having up to 30 mares at one stage, Giles has largely scaled back on her breeding operation in the last few years to “a couple of mares in the eastern states and around five at home”, with home being a small property at Busselton, some 200 kilometres south of Perth.

To Giles’s studied eye, Profit Street had class written all over him from day one and she’s hardly surprised the horse has notched up black type success.

“He (Profit Street) is a very good looking horse … very athletic, great temperament,” Giles points out. “He’s out of a strongly built mare (the unraced Street Show, a half sister to the dam of Champion 3YO Filly, Delicacy) and I thought putting her to Viscount was a good cross.

“Profit Street ended up being purchased at the Perth Magic Millions by the Giadrescos on behalf of Serge Madrigali who also raced another horse that I bred in, Scenic Assault, who won 13 races – eight of those in a row – and nearly $400,000.

“It’s terrific that Serge has won a stakes race with the horse, but special mention also to the trainers and jockey.

“Peter (Giadresco) got hurt in a non-racing related accident a few months back and Matt has really stepped up and done a terrific job, while Brad Parnham has moved up to another level in the last 12 months. He’s an outstanding jockey.”

Given Giles’ eight stakes wins this season, we might add ‘outstanding breeder’ too!