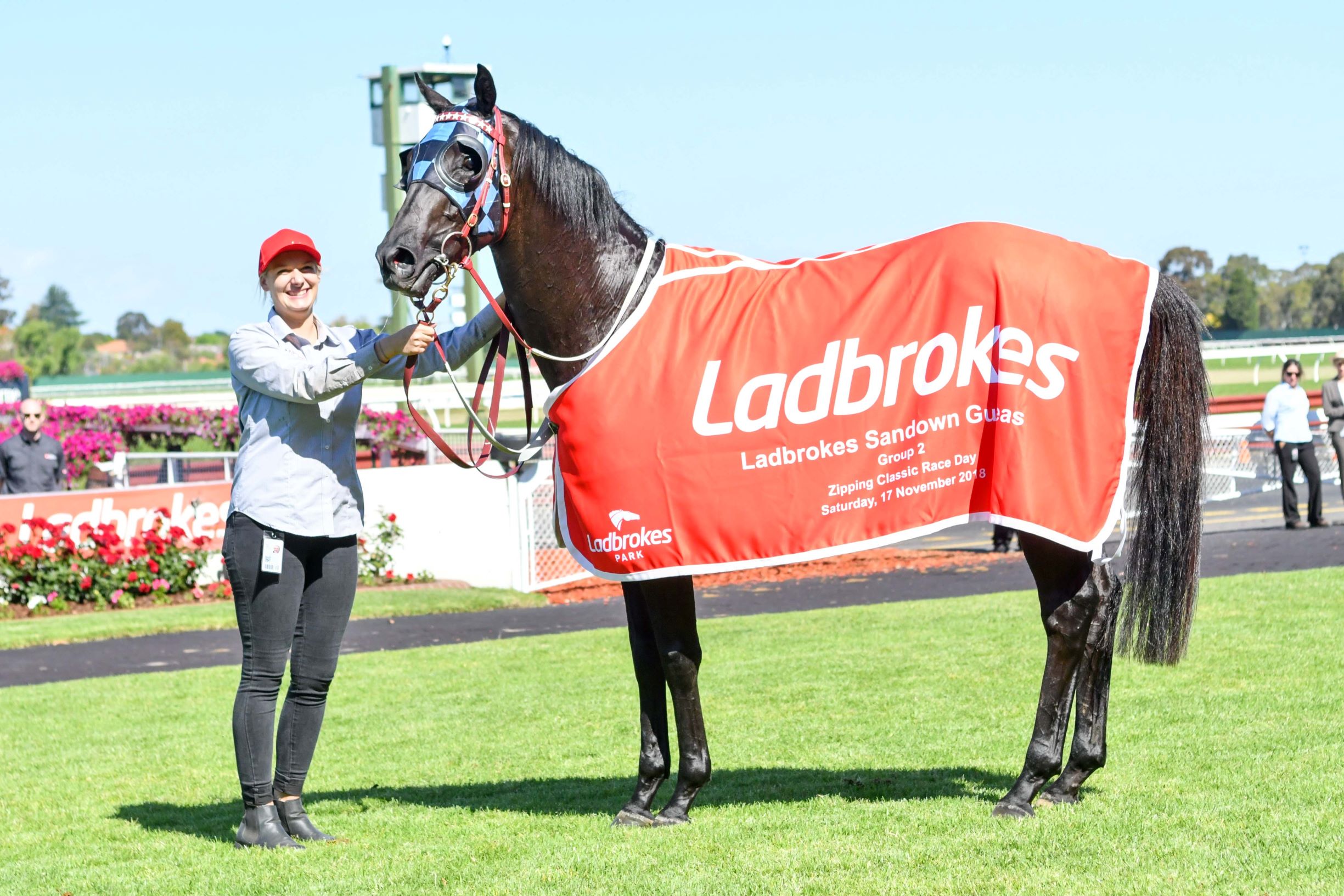 There is something genuinely exciting about those horses that dwell with the cap catchers, only to then produce a withering burst to get up in the last few strides.

Well, maybe it’s exciting for us: not so much for connections.

Take for instance the win of Ringerdingding in Saturday’s Group Two Ladbrokes Sandown Guineas over 1600m.

With 400m to go, the Darren Weir trained colt was only just starting to wind up, yet produced an incredible turn of foot to score with nearly a length to spare. Such was the lightning-like finish at Sandown, Ringerdingding is now the front-runner … or should we say, early favourite for the Group One Australian Guineas next march.

It should be noted that Weir saddled up four winners at the elite level throughout the spring, plus a host of black type winners, but the normally laid-back trainer admits the Sebring colt gives him some anxious moments.

Originally trained in Sydney where his four juvenile outings included a win at Rosehill on debut, along with some disappointing results in the early spring, Ringerdingding has truly blossomed since shifting south.

Indeed, it was only five starts ago that Ringerdingding won a midweek race at Bendigo by a whisker, yet in the space of 21 days he ran third in the Group Three Red Anchor, won the Listed Hilton and now the Sandown Guineas.

Part-owner, Ricky Surace of B2B Bloodstock, clearly enjoys the ride though and isn’t complaining about Ringerdingding’s ‘style’: particularly as he is poised to reap substantial rewards as the colt continues to build up an impressive resume before eventually heading off to the stallion barn.

A son of the Widden Stud based More Than Ready stallion, Sebring (51 stakes winners), Ringerdingding is out of the multiple stakes placed Red Ransom mare, Maybe I, in turn a granddaughter of Champion mare and dual Group One winner, Flitter.

Maybe I was purchased by Paul Willetts, on behalf of Three Bridges Thoroughbreds for $120,000 at the 2015 Inglis Australian Broodmare Sale – carrying Ringerdingding – with Surace going on to secure the resultant colt from Three Bridges for $170,000 at the 2017 Inglis Melbourne Premier Yearling Sale.

In fact, Surace would buy Maybe I herself from Three Bridges last year and she has foaled down a full brother to Ringerdingding and is now back in foal to Sebring.

Surace first got into ownership a little over 10 years ago and struck gold immediately with his first horse being dual Group One winner and now Widden-based sire, Star Witness.

“Apart from my main business being Project and Construction Management, my passion lies with effectively building my broodmare band,” Surace reveals. “I’ve learnt from the best – specifically Rick Jamieson (breeder of Black Caviar) – and own mares which all are either stakes horses themselves or dams of stakes horses. All of the mares and their resultant foals are based at Newhaven Park who are also prepping five yearlings for the Gold Coast (Magic Millions) and a couple for the Sydney Classic on my behalf.

“Aside from the likes of Maybe I, my breeding barn includes the likes of Leone Chiara who foaled down a full brother to Star Witness in August.

“He (Star Witness) has been having a lot of success of late including the Alan Bell owned Graff who ran fifth in the Everest last month and was bred by B2B Bloodstock.

“I was fortunate to get a horse like Star Witness so early in the piece and support him with quite a few mares, but B2B Bloodstock has shares in numerous stallions.

“With what started out as a hobby, it has now developed into a business where we race, breed and sell. Ringerdingding was one of around six we bought the year before last in tandem with Viv Oldfield (who raced Shamus Award), Sean Duke, Wilf Mula and Segenhoe Stud.

“Turned out to be a pretty good 24 hours for me as I was at Moonee Valley on Friday night to watch my mare, Beetobee, who I bought in Japan, win the first as well.

“I’d love to win the Australian Guineas with Ringerdingding … Darren (Weir) reckons the colt reminds him of Palentino who won the Guineas two years ago and has since gone on to stand at stud. A lot of good sires have won that race.”

Leading Victorian nursery, Three Bridges, is making every post a winner too … particularly with the progeny of Sebring.

“It’s really come together for us over the last couple of years,” Three Bridges’ Toby Liston enthused. “Great to see Ricky and his crew get a Group Two winner and we also bred the Unencumbered half sister, Salome, who is with Ciaron Maher and David Eustace and was stakes placed on debut in the Inglis Banner last month.

“Been a big year through our involvement with Group One winners Sopressa (Schweppes Oaks) and Leicester (South Australian Derby) and fingers crossed we kick off 2019 in the right way too with Courseshewill, who is by our stallion Unencumbered and won two from two so far. That qualifies her for the ($2 million) Magic Millions 2YO Classic in January.

“The success on the track has been reflected in the quality of what we’re selling as well with 11 being prepped for the Gold Coast, while we’ve got four mares on farm in foal to I Am Invincible – isn’t he flying! – and three Frankel yearlings. Busy few months ahead.”