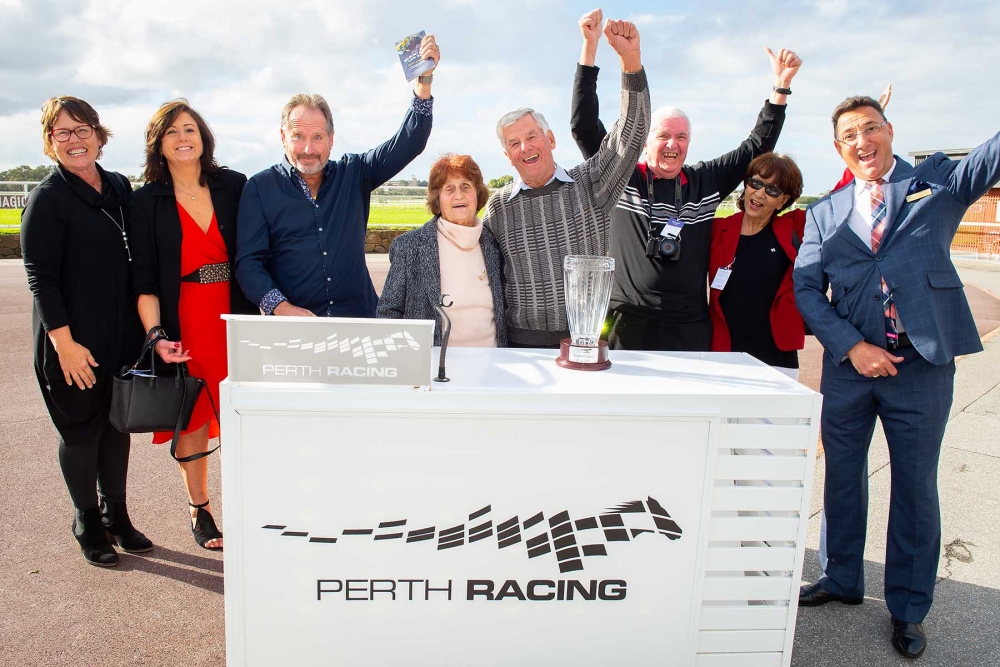 Well, you don’t see that every day!

Mystery Miss was considered a very good chance in the $100,000 Listed Belmont Classic over 2200m at Belmont Park on Saturday, as the odds of $1.12 would obviously suggest.

However, as there is no such thing as a certainty in racing and, try as she might, Mystery Miss just couldn’t shake off the challenge from Brett Pope trained, Rivalry Galore, who was a maiden coming into the race.

Indeed, while Rivalry Galore had run four straight placings from his previous five outings – including a last start second in the Listed Aquanita Stakes – Mystery Miss was fresh from successive stakes victories in the Belmont Guineas and Belmont Oaks.

Yet, while it came as a huge shock to punters, Pope was not without confidence, especially after jockey Troy Turner insisted “I think we can get this” as he was being legged up.

“It’s terrific for the owners as they also bred the horse and raced his mum (Lady Rivalry) and have been very patient with him,” Pope explains, who notched up his second black type victory after Tarquinn Shadow won the 2015 Listed Starstruck Classic at Ascot.

Training for 12 years and with around 30 in work at his Pinjarra stables, Pope was undecided – past a well earned spell – as to Rivalry Galore’s agenda.

“This was his first prep and sixth race, but the further he gets, the better he gets,” Pope adds. “There will be some good races for him later in the year.”

“Rivalry Galore hasn’t run a bad race to date and I was fairly confident he could run second, but let’s put it this way … I didn’t have a speech written,” a delighted Ashworth points out.

The 13th stakes winner for ill-fated Zafonic stallion, Trade Fair, Rivalry Galore is out of the winning Blackfriars mare, Lady Rivalry, who was purchased by Ashworth, fellow breeder Wendy Harman, and co. for just $5,000 at the 2004 Perth Magic Millions Autumn Yearling Sale.

“I started racing horses in the early 1990s when a neighbour – the twin sister of Wendy Harman – said she was going to buy a horse and wondered if I’d like to take a share. That’s how I got to know Wendy,” Ashworth reveals. “I’ve always had one or two ticking along, but Lady Rivalry is the first one we bred from.

“Lady Rivalry’s first foal was Stay Lady Stay who won four races for us and was stakes placed. However, the mare has had a fair amount of bad luck since. After Stay Lady Stay, she missed to Zedrich, then the following year her Zedrich foal cut a leg and had to be put down. Her next foal, a Passenger colt, broke a leg at trackwork and then her Scandal Keeper filly did a suspensory before she could race.

“Finally, along came Rivalry Galore and it was Wendy’s son, Wayne, who had suggested she be covered by Trade Fair. It worked out pretty well on Saturday.”

Hardly daunted by the ebbs and flows of the thoroughbred industry, Ashworth admits he no longer breeds.

“I’m retired now and really can’t afford to have too many horses so Wendy and I have given our mares to Brett, but we’ve kept yearling colts from Lady Rivalry and Stay Lady Stay that we’ll also race with Brett.”

A tight knit group of connections, Ashworth adds that one of Rivalry Galore’s owners – John McMullan – is racing his first horse.