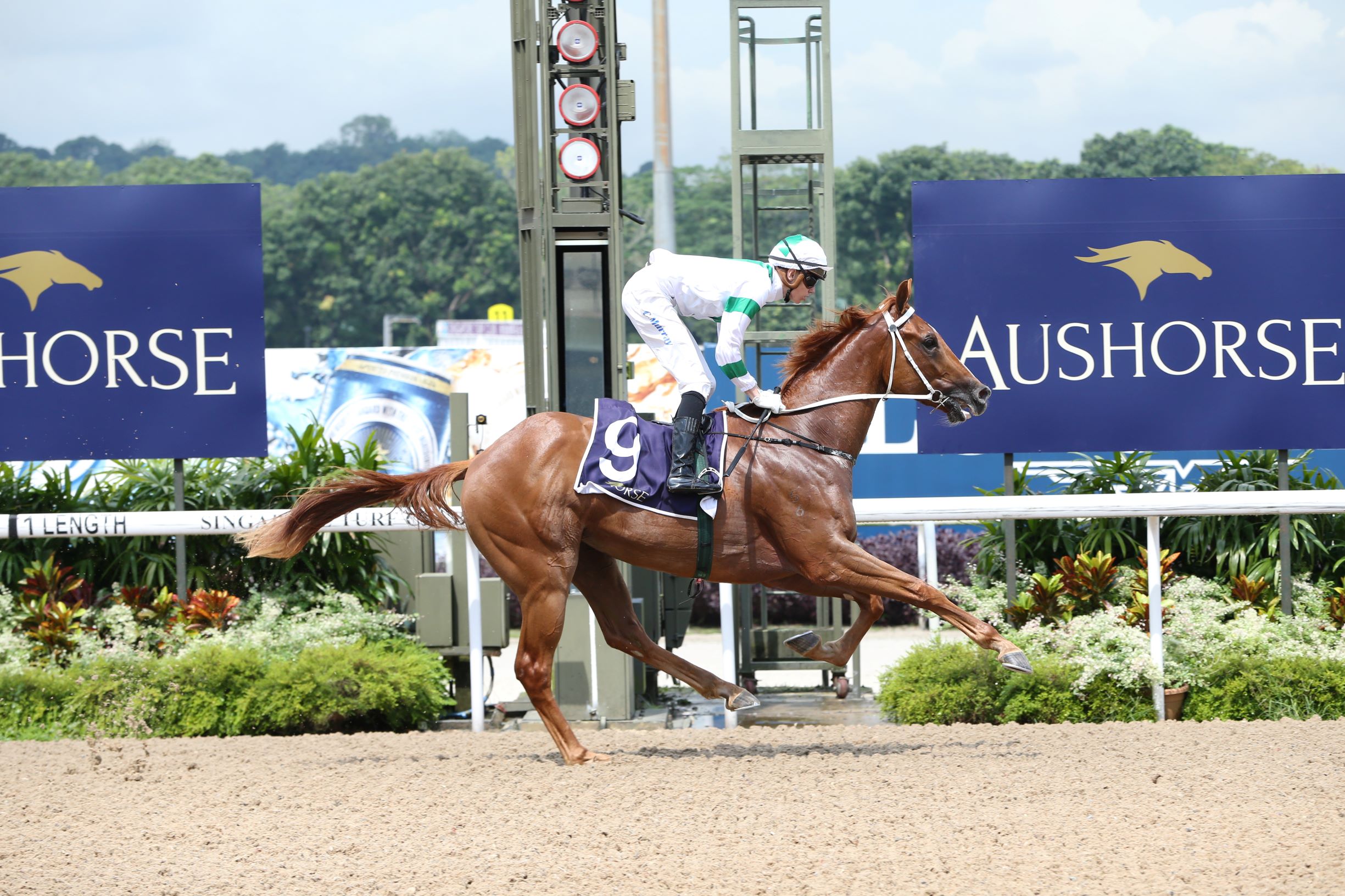 It is somewhat fitting that the first four horses across the line in Sunday’s Thoroughbred Breeders Australia Centenary Stakes – the second leg of Singapore’s Aushorse Golden Horseshoe Series – were all Australian-bred.

Star Witness youngster, Rocket Star lived right up to his name (and favouritism) with a powerhouse display over the 1100m at Kranji, burning the polytrack to score with nearly three lengths to spare.

It was just the second run for Rocket Star who debuted with a lip second behind fellow Australian-bred, Big Hearted, in the first leg of the Golden Horseshoe – the Inglis Ready2Race Sale Stakes – on 19 May. The connections of Rocket Star protested unsuccessfully against Big Hearted, due to interference, but there was no need for the flag to go up on Sunday.

That said, the run in the Centenary wasn’t trouble free with Rocket Star copping a massive check as they turned for home.

“He (Rocket Star) is such a talented horse,” jockey Callan Murray enthused. “He knew what he was doing and put the race to bed … he should have won his last start and will only improve from here.”

“Rocket Star had the measure of (stablemate) Golden Dash, beating him by seven lengths in a trial and then Golden Dash came out and defeated a smart field on Friday night, so I was pretty confident about Rocket Star’s chances on Sunday,” Le Grange points out. “Very well done to Rudy (Mendoza) whom I met at the Magic Millions sale and I found Rocket Star for him. He’s a very smart horse.”

Declaration of War 2YO, Admiral Winston, would fill second, while Strong N Powerful (Golden Archer) and Life After U (I Am Invincible) finished third and fourth respectively. Notably, all four were offered at Australian sales.

The Aushorse Golden Horseshoe Series – now in its 9th year and leading toward the S$250,000 Group Two final on 19 July – is designed to boost 2YO racing in Singapore, with Aushorse joined by much valued fellow sponsors, Inglis, International Racehorse Transport (IRT) (third leg on 21 June) and Magic Millions (fourth leg on 7 July).

Meanwhile, across in Macau, the only three Australian-breds in the Listed Lisboa Challenge at Taipa on Sunday dutifully filled the first three placings: Tagmaster too strong for Golden Victory and Oneofthegreats.

It was an impressive performance from Tagmaster who jumped awkwardly, was held up rounding the home turn and only saw daylight in the last 150 metres.

The Lisboa Challenge becomes the maiden stakes win for Tagmaster who raced five times in Australia as Global Impact before heading to Macau.

Eurozone’s best runner thus far – Krone – is a multiple stakes winner at two and three, was runnerup to Group One winner Amphitrite in the Group Two Edward Manifold Stakes last spring, and, most recently, third to Military Zone in the Group Three Fred Best at Doomben last month.

“We’re very happy to get such an exciting son of Northern Meteor on board,” said Chris Burke, who secured Eurozone on behalf of boutique property, Bellereve Stud, right next to Canberra in the Australian Capital Territory. “This region really needs a stallion of his quality and it’s worth remembering that both Krone and his unbeaten filly, Mystery Love (Listed Bendigo Guineas) are from his first crop. In fact, both of them won stakes races – a week apart – just before the announcement he would be heading to Bellereve.

“What’s more, he covered 417 mares in his first three years at stud, so there’s a lot of Eurozones coming through.

“Northern Meteor was a such a super sire and now sire of sires through the likes of Zoustar and Deep Field, so it’s terrific to have such a well credentialled son on hand for local breeders – especially given Eurozone stands for just $7,700.”