Thrilla From Chinchilla Fires Up The Champagne 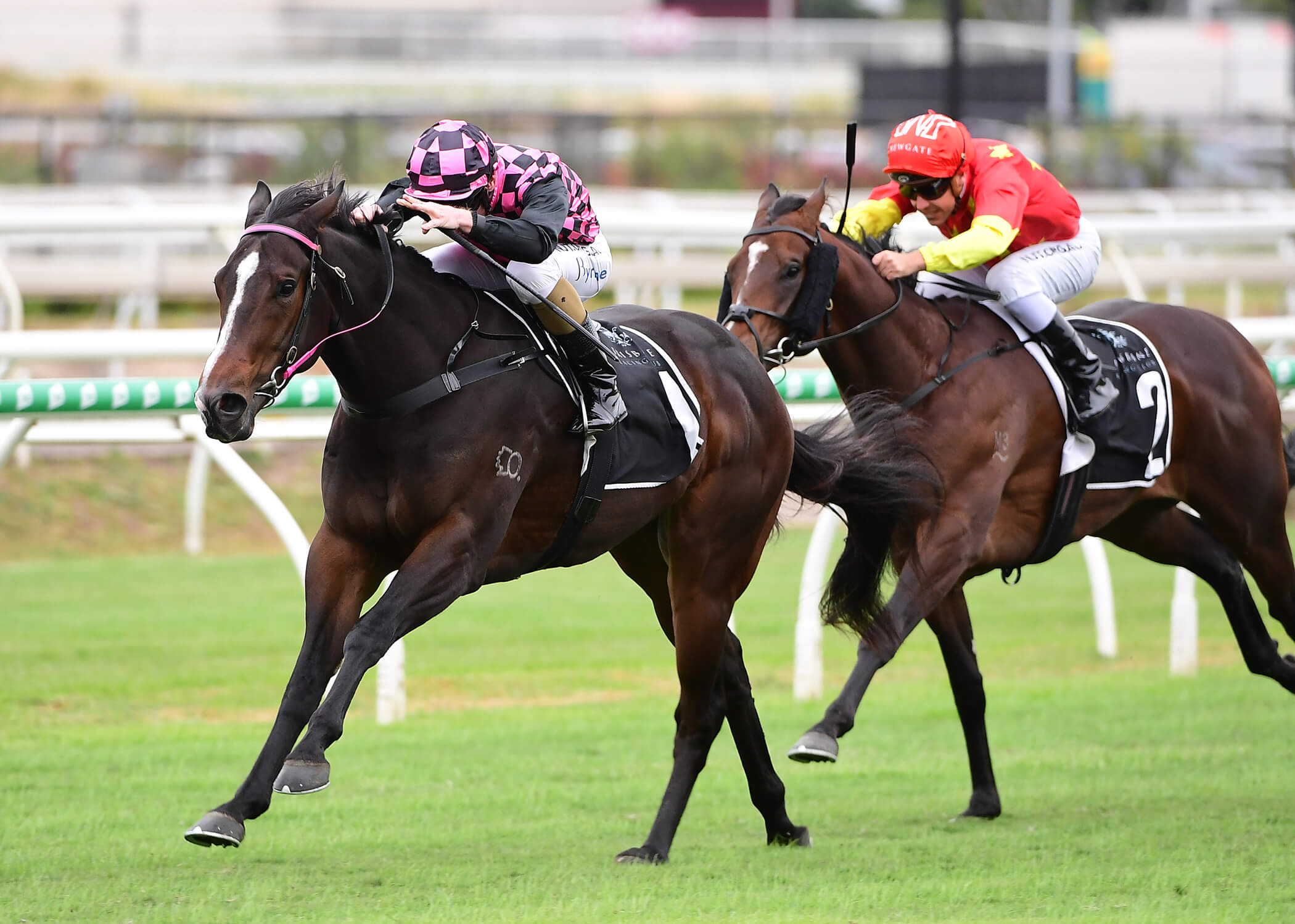 Following a sublime performance over 1200m in the Group Two Moet & Chandon Champagne Classic at Eagle Farm on Saturday, brilliant 2YO, Rothfire, is poised to step up a further furlong to contest the Group One JJ Atkins Stakes on 6 June.

Coming into the Champagne, Rothfire had won four straight in Brisbane – from 1000m to 1110m (capturing the last three by a combined 15 lengths) – with the only blot on his copybook a second to Kisukano over 1200m at the Gold Coast.

The market suggests Rothfire won’t have a problem with the 1400m in two weeks – the JJ Atkins is normally run over 1600m – with the Rothesay youngster quickly installed a $4 favourite by the TAB for the Group One.

Yet, while some might question Rothfire’s bona fides over a distance, the same couldn’t be said of his connections.

A sizeable proportion of Rothfire’s large ownership group – Brisbane plumber, Viv Yates, among them – celebrated long into Saturday night and had pulled up a bit sore on Sunday. Sore, but very, very happy.

“We had a few friends around to our place to watch the race and, yes, you could say we had a couple of drinks,” a hoarse, Yates, revealed.

Yates, along with his father, Rob, and mum, Louise, are among 15 in that particular partnership of the overall syndicate and Rothfire is just the second horse they’ve owned.

“It’s mainly made up of mates who fancy the odd punt and we’d been talking about getting into a horse for years,” Yates recalls. “We enjoyed quite a bit of success with the first one and now Rothfire has come along … a helluva lot of luck I’d say.”

“On behalf of the group I’d been looking around for another horse after Break Time and I saw Rob Heathcote advertising this bloke,” Yates reveals. “I remember watching Rothfire’s sire, Rothesay (Group Two Queensland Guineas) race and I liked the look of this horse, so sent out a few screen shots to the crew. We each paid around $1,200 for a share. The rest, as they say, is history.”

Not surprisingly, Heathcote – who also saddled up 6-time Group One winner, Buffering throughout his illustrious career – was delighted with the Champagne success.

“It (the Champagne) was my first Group success back in 2000 with Chenar, then I won it again in 2009 with Funtantes,” Heathcote points out.

It wasn’t, however, a whole lot of ‘fun’ for Heathcote in getting Rothfire in the first place.

Simon Gleeson, whose family bred Rothfire, takes up the story.

“We couldn’t get Rothfire into a sale,” Gleeson explains. “Both Inglis and Magic Millions came around to inspect him, but he’s a bit light on pedigree and, while there’s absolutely nothing wrong with the horse on type, it’s hard to stand out in a paddock full of yearlings.

“At first we tried to sell him into North Queensland where his half sister, Rylee’s Saga, had won six races, but that fell through.

“We’ve had quite a few dealings with Rob (Heathcote) over the years and he agreed to take the horse on our say-so for $10,000, asking us to send the horse down to Kevin Thomas to be broken in.

“Anyway, quite a while later I noticed the money hadn’t gone into our account so I phoned Rob. He said ‘I’m sure that’s been paid’ but then we worked out the invoice had been somehow intercepted and the details altered. As such, the money went into someone else’s account.

“So, in the end, Rob has paid for the horse twice … although I’m fairly sure he’s not too worried about it after Saturday.”

Gleeson Thoroughbred Connections is run by Gleeson’s parents, Wally and Jill, while Simon – along with brothers, Jacob and Tom – are very much involved.

“We’ve got around 60 horses at our Chinchilla property and they’re all owned by the family … 20 of those are broodmares,” adds Gleeson who is also a director of the Brisbane Racing Club.

“It’s great horse country and approximately 300 kilometres from Brisbane. On one side of the road they bred, Seawinne who won a Group Two, while on the other side they bred (Group Two) Villiers winner, Rudy. Hopefully we can split the difference with a Group One for the horse they’re already calling the ‘Thrilla from Chinchilla’.

While Gleeson Thoroughbred Connections – as the name would suggest – is a family affair, Simon is quick to laud his dad, Wally.

“This is a huge result for all of us, but full marks to Wally … he’s been involved with horses all his life and was a polocrosse player, breaker, trainer.

“As an amateur jockey he has the record for the highest paying treble at Eagle Farm, which included kicking home a 100/1 winner.

“He’s nearly 70 and still does all the walk ons for the mares, foals them down, does the weaning, the yearling prep, the spellers – you name it.

“However, to have Rothfire come off the farm … well, that’s truly special.”

Huss On Fire was purchased by the Gleesons for $9,500 at the 2010 Inglis Broodmare Sale, going on to produce six foals – three of them winners.

“Rothfire was Huss On Fire’s last foal,” Gleeson reveals. “We gave her one more try after Rothfire was born and she missed, so we decided she’d become a nanny. Sadly, she got an infected leg and died.

“With Rothfire showing so much promise we ended up getting, back on farm, his half sister, Fiery Hussy, who had never raced due to injury and was being used as a dressage horse, while the full sister – Smokin’ Hussay – won a race but broke a pedal bone and had to be retired.

“Hopefully quite a few close relations to Rothfire in the years to come.

“He (Rothfire) is a seriously good galloper. There was a huge storm at Eagle Farm at the time of Rothfire’s first run and the race was held up due to some problems in Sydney and, on Saturday, the program was delayed following a bomb threat.

“It’s worth noting Rothfire ran a quicker time on Saturday than the open class horses in the Victory Stakes, so I say full speed ahead to the JJ Atkins.”