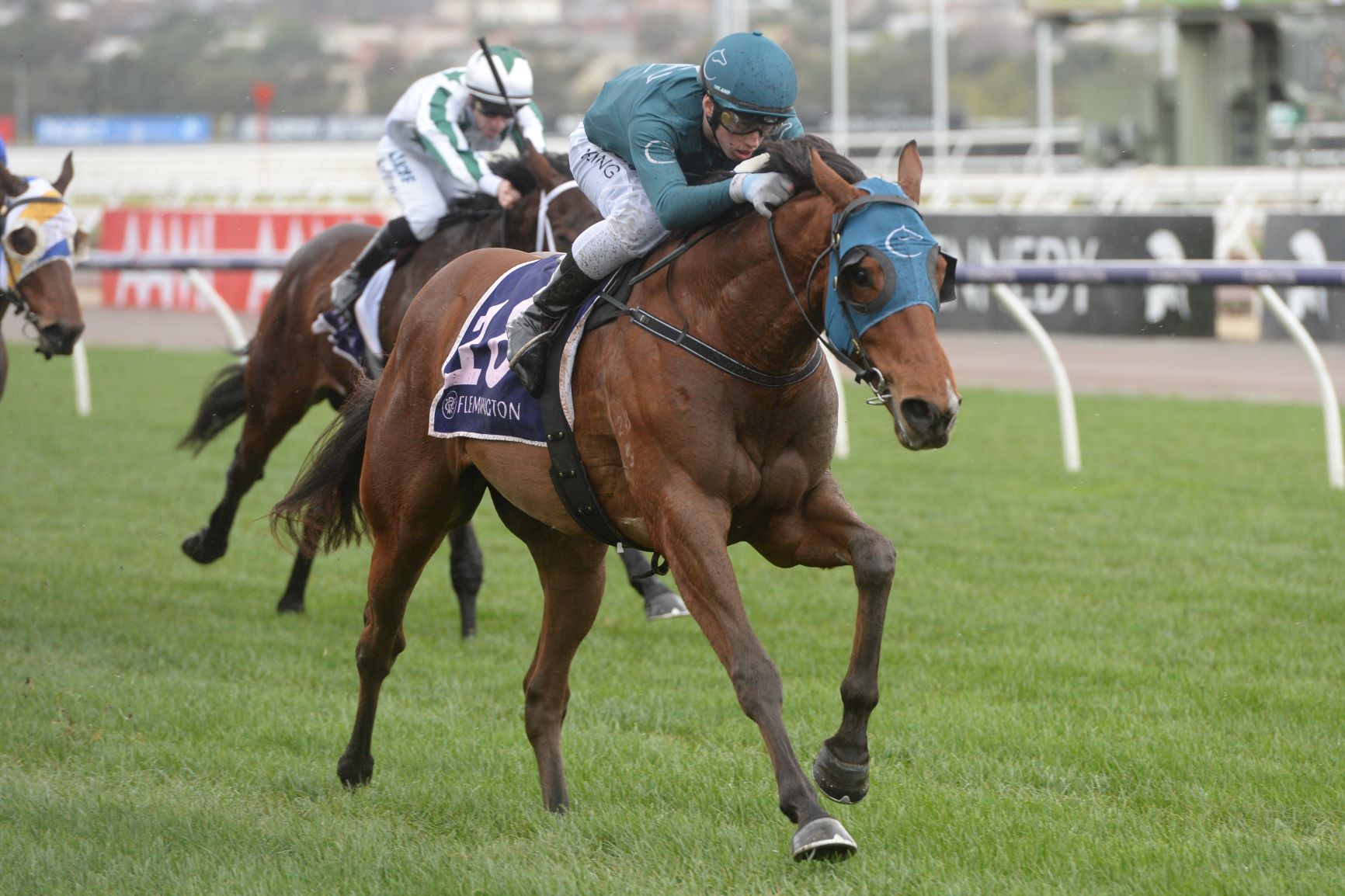 There’s always something thrilling about the ‘straight six’ at Flemington. It’s real ‘Charge of the Light Brigade’ stuff, except only with a better ending.

On Saturday in the VRC Member Thomas Dandis Handicap, Ruban Bleu absolutely flew home over the final stages to record a memorable win for his large team of owners: ultimately scoring with nearly three lengths to spare.

Adding considerably to the win was the fact that Ruban Bleu was an emergency for the race, only obtaining a run due to several scratchings courtesy of the heavy surface.

It didn’t worry Ruban Bleu though and he relished the conditions according to Suman Hedge, who purchased the Artie Schiller sprinter for $80,000, on behalf of Carbine Thoroughbreds, at the 2017 Inglis Melbourne Premier Yearling Sale.

“I think the penny has dropped for Ruban Bleu,” Hedge points out. “Two starts ago he was going around in a Class 1 and now he’s won a good race at headquarters.

“He showed ability at two (with a Flemington fourth and a pair of Caulfield seconds) but then lost his way a bit. The Lindsay Park team have really persevered though and he came into Saturday on the back of a Flemington third three weeks ago.

“No decision has been made as to what lay ahead, but he’s very effective down that Flemington straight and he could pick up a really good race in the spring.”

Ruban Bleu is out of the winning Fastnet Rock mare, Bleue Pepite, a half sister to the Melbourne Group winner, Think Bleue, from the Group Two Silver Slipper winner, Ballybleue.

“Following our respective rounds of inspections, the Hayes team (Lindsay Park) and I compared notes at the Premier sale and Ruban Bleu was on both our lists,” Hedge recalls. “I’ve always liked the Artie Schillers and Flying Artie was literally flying at the time.

“Aside from the immediate family, Ruban Bleu has a terrific female pedigree, being related to Encosta de Lago and Flying Spur and it gave us added confidence when (breeder and vendor) Emirates Park decided to stay in the horse too.”

After breeding Group One Doncaster winner, Triple Honour – from a mare (Myrrh) which he purchased for just $19,000 in 2002 – Hedge has worked for a number of leading farms before setting up an agency under his own banner just on 12 months ago.

“The business focusses on breeding, stallion brokerage, yearling purchases and pinhooking, the latter of which we’ve had a good bit of success with of late,” Hedge explains. “We bought a number of weanlings in 2018 which made substantial returns, but one of them in particular, a Zoustar colt, was purchased from the Widden Stud draft for $200,000 at the 2018 Magic Millions National and was then sold in April, at the 2019 Inglis Easter Yearling Sale, for $1 million.

“The massive growth of prizemoney in Australia appears to be well and truly reflected in the sale ring and pin hooking is becoming more popular than ever.”

“There were around 10 winners last season from yearlings purchased during my time at Carbine: Ruban Bleu of course, while others include Mystery Love, who has won three from three for Mick Price, including the Bendigo Guineas.”

Ruban Bleu’s storming performance on Saturday is also welcome news for Stockwell Thoroughbreds’ Mike and Brodie Becker, who purchased Artie Schiller in 2018 and the prolific source of winners is about to embark on his second season at the Victorian nursery.

“He (Artie Schiller) is 18 now and we’re not looking to get massive numbers to him,” Mike Becker points out. “We would be happy with around 80 mares, which – on the back of recent winners – is definitely achievable.

“He covered a big book of mares in 2016, due in large part to Flying Artie, and we bought the stallion on the back of those numbers coming through, which have all just turned two.

“He has a strike rate of around 70% winners to runners and it’s only a matter of time before he finds another good horse.”

HOOFNOTE: The success of Australian-breds in South East Asia continued on Sunday with Truson – a $16,000 purchase from the Inglis Sydney Classic Yearling Sale – capturing his fourth stakes race (14th win overall) in the Malyasian Group One Selangor Gold Cup over 1600m, defeating the Victorian-bred D’Great Timing.

Truson is among 34 stakes winners for the Danehill stallion, Al Maher, who joins Artie Schiller at Stockwell Thoroughbreds in 2019.