Santa Ana Lane goes for broke and races into history 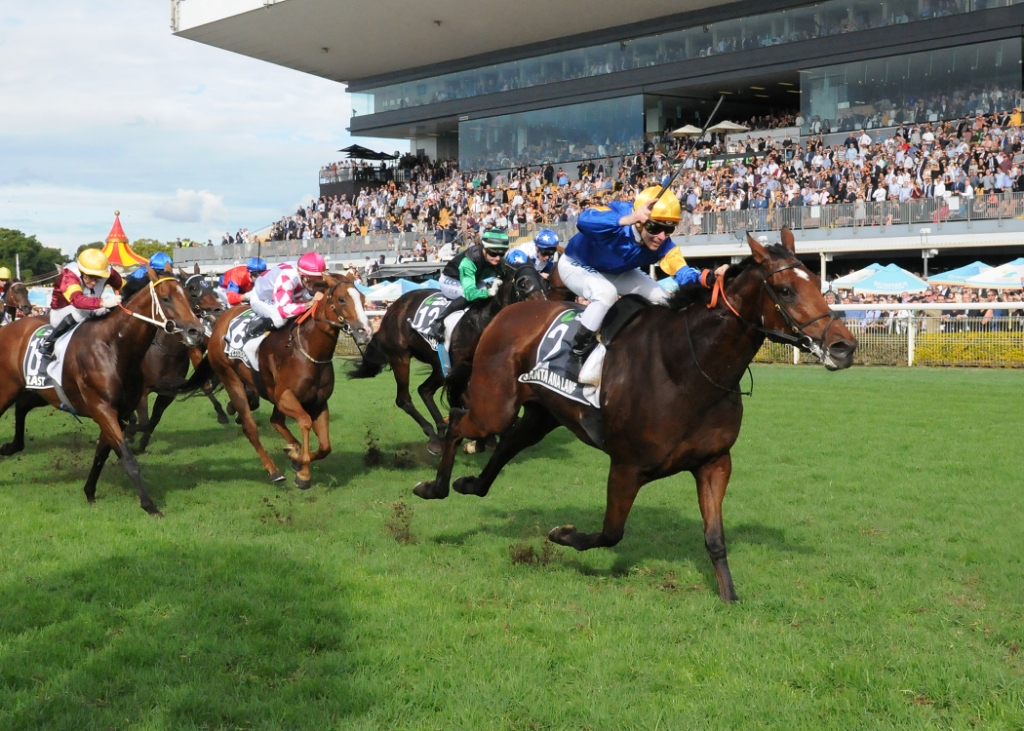 Is Santa Ana Lane the best sprinter in Australia? If you asked any members of the William Street Syndicate (his owners), around 2.17pm on Saturday, there’s a pretty solid chance the answer would have been in the affirmative.

Sure, the rusted on fans of Redzel, Redkirk Warrior, Trapeze Artist, Merchant Navy, Shoals and co. might beg to differ – politely of course – but Santa Ana Lane’s $1.5 million UBET Stradbroke Handicap score was his third at Group One level this season and he also became the first horse in history to annex the Goodwood/Stradbroke double.

Regardless of your preferences, Santa Ana Lane is one outstanding racehorse. The Anthony Freedman trained 5YO is now the winner of $2,228,711 in stakes courtesy of seven wins and six placings from 27 outings.

Showing promise early with wins at his first two starts, Santa Ana Lane won the Group Three Zeditave Stakes at outing #4, but it would be over 14 months before his next victory in the Wagga Town Plate. Indeed, almost 12 months ago to the day, Santa Ana Lane ran fifth of eight in a Flemington Handicap.

This season however, Santa Ana Lane’s three victories have all been at Group One level, commencing with the Sir Rupert Clarke Stakes last September.

“I’ve raced a few horses over the years and a couple of nice winners too, but the last really good horse I had was Waitangirua, who won a Liston, Underwood Stakes and Doomben Cup … nearly 40 years ago!” he said.

That’s a fair while between drinks and Dumbrell did his best to make up for lost time on Saturday night, but had to make his escape from Brisbane early on Sunday morning.

“I run Leader Products, which imports (horse) rugs from Ireland and distributes TRM supplements in Australia, so I had to be back in Victoria for the 3-day event at Werribee,” Dumbrell explains.

“It was a long plane trip home I have to say.

“This is my first horse with the William Street mob and what a horse. They’ve raced some very good gallopers over the years with the likes of Gurner’s Lane (Melbourne and Caulfield Cups), Paris Lane and De Gaulle Lane and I’ve just been lucky enough to get into another Group One winner with them.”

The Stradbroke win closed out a bittersweet week for Victoria’s Rosemont Stud which sold Santa Ana Lane as a yearling – on behalf of breeder Dyson Hore-Lacy – for $80,000 at the 2014 Inglis Melbourne Premier Yearling Sale.

A few days earlier, Rosemont had to pull the plug on an ambitious Royal Ascot campaign for unraced 2YO filly, Luck Favours. A daughter of Starspangledbanner – bred by Rosemont to Northern Hemisphere time – Luck Favours was mega impressive in a trial win at Werribee last month, but due a temperature spike, the trip to England had to be cancelled.

However, it’s been a memorable 12 months or so for Rosemont Stud which had either bred, raised and/or sold four Group One winners in 2017.

And that trend has pretty much continued in 2018 through ‘graduates’ such as Santa Ana Lane, Group One horses Runaway, Rimraam, Prairie Fire and True Excelsior, plus Iconoclasm, Fish River (Group winner in South Africa), Thrillster and Krone.

In fact, on Saturday, they had another homebred runner the 3YO filly Remember The Name win at Flemington. Coincidentally, like Santa Ana Lane, the filly is also by Lope De Vega.

Sales results were also strong, Rosemont set a new benchmark for the highest priced yearling sold at the VOBIS Gold Yearling Sale and had a Spirit of Boom colt sell for a sale-high $300,000 in Adelaide.

Comparatively, Santa Ana Lane would only make $80,000 in the ring, but had plenty going for him according to Rosemont’s Anthony Mithen.

“I remember him well … he was such an uncomplicated type of horse,” Mithen points out.

“He’s a Lope de Vega and was just the kind of athlete you could recommend to anyone. Trouble free and very correct.

“He looked as if he’d go on with it and that’s certainly proven to be the case. I reckon they’ll have a tough go trying to pick the best sprinter from this season and I’m firmly in the Santa Ana Lane camp.”