Selenia…No Doubt About The Value 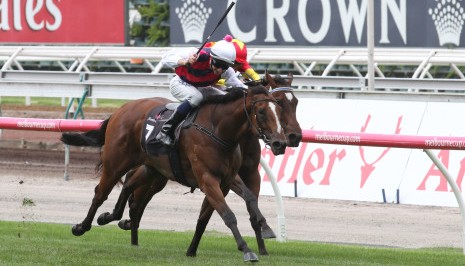 Victorian trainer, Robbie Griffiths, made a beeline to Stable 2 to have a closer look at the Not A Single Doubt filly that had been passed in for $27,500 early on at the 2015 Inglis Australian Easter Yearling Sale.

That kind of money is something of an anomaly (not to mention a huge disappointment for the vendor) at a sale that usually generates 10 times that amount and the ever diligent Griffiths just had to be sure that a wheel hadn’t fallen off.

“Prior to the sale, we had thought she (the Not A Single Doubt filly) would be out of our price range, but then (bloodstock agent) Peter Ford told me she had been passed in for next to no money,” Griffiths recalls. “I went and had another look and told the vendor we’d buy her for $30,000, subject to a veterinary check. The rest, as they say, is history.”

Ford concurs: “She wasn’t overly big and was pretty much dwarfed by some of the other ‘monsters’ at Easter, but she had a lovely walk and the thing about the Not A Single Doubts is that they all eat and run!”

It wasn’t long before the filly, now named Selenia, was proving to be the quickest two year old at Griffiths’ Cranbourne stable, a stable which – it’s worth bearing in mind – had two runners in this year’s Group One Blue Diamond.

Selenia didn’t quite make the cut for the Blue Diamond (first emergency) but had put in two promising fourths in the Diamond Preview/Prelude and Griffiths was confident her day in the sun wasn’t far away.

And the sun was definitely shining on Saturday when the $30,000 filly won $73,200 in one fell swoop by taking out the Listed 3AW News Talk Sport Stakes (1000m) down the Flemington straight, boosting her overall earnings to $88,950 and pushing her residual to stratospheric heights as a stakes winning member of a family which includes a three quarter in blood relationship to multiple Group winner Moonovermanhattan and a page full of black type success stories.

Selenia is stakes winner No. 31 for Not A Single Doubt and is entered up for the $3.5 million Longines Golden Slipper at Rosehill Gardens on 19 March.

Griffiths is unsure at this stage if Selenia will make the trip north, but wasn’t dismissing the prospect out of hand: “she’s been something of a surprise since the day we purchased her and,” unable to resist a pun, “there’s not a single doubt she’s got plenty of class.”