Sircconi And Morgan Show The Heart Of Chinese Lions 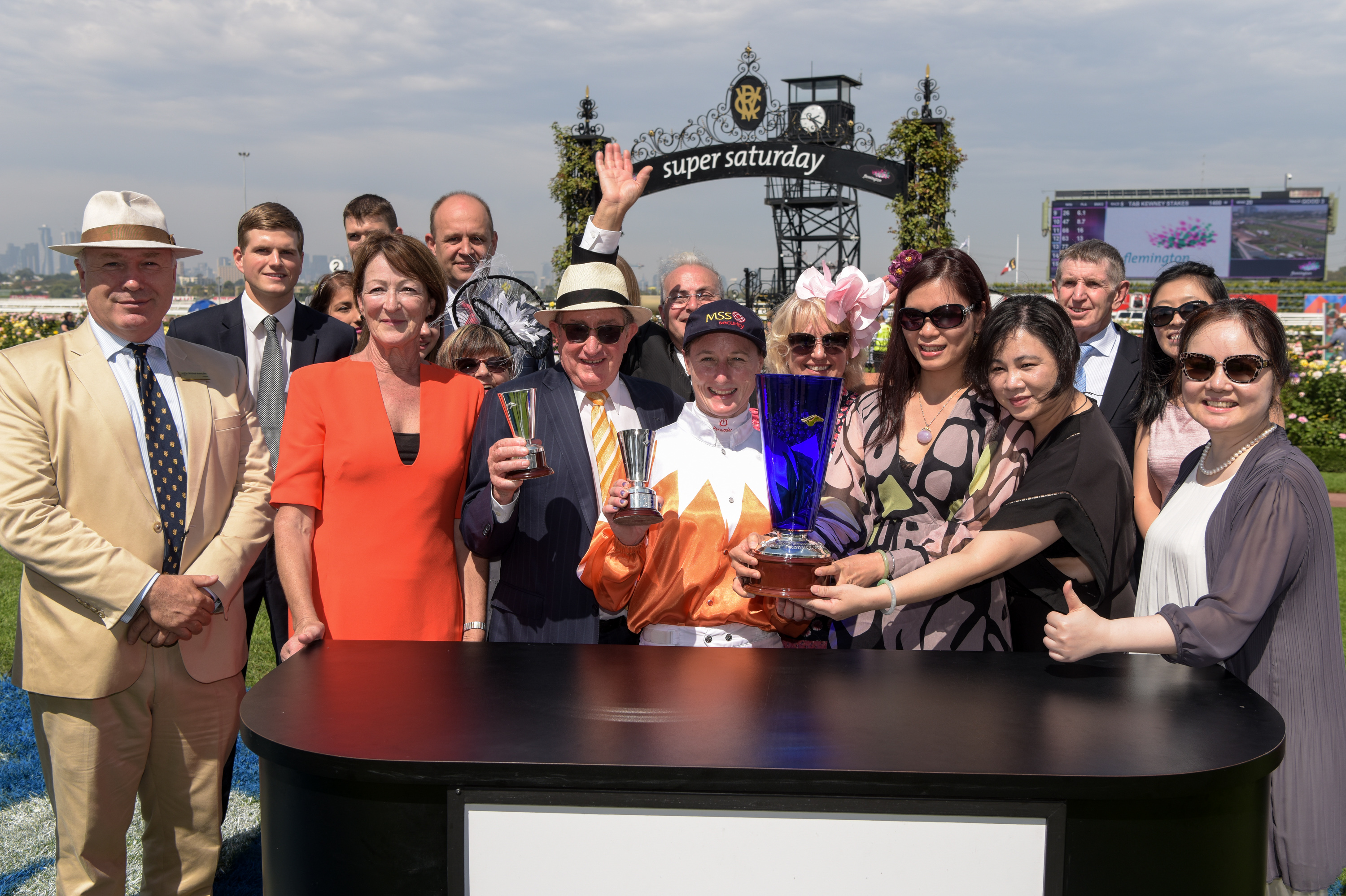 Connections of Sircconi celebrate the colt's win in the Sires' Produce Stakes at Flemington on Saturday (Racing Photos).

Given his close association with horses, Peter Morgan often wears lots of things on his sleeve, but his heart isn’t among them.

After decades of industry involvement – as a jockey, then stud manager and now trainer – Morgan is fairly stoic and not prone to histrionics. Rational. Business like.

“I actually thought he might have got beat,” Morgan observed and, as it turned out, it took a photo to prove him wrong.

“I’ve been around a lot of very good horses over the years and I usually hold it together pretty well, but I must confess that when a roar erupted from the owners after his number went up, I got fairly emotional.

“They’re a great bunch of people. A lot of them first time owners too. They would have been just as happy if Sircconi had only run a place, so you can imagine what they were like after the horse won!

“A couple of years ago I was at Flemington for the Melbourne Cup and was introduced to a number of Chinese who have their own Lions Club. There are around 100 members of this Club and, anyway, we got to chatting and, after visiting China a couple of times, I invited them to a barbecue at my stables to have a look at this Nicconi colt I’d purchased from Bhima Thoroughbreds at the 2016 Inglis Classic Yearling Sale in Sydney.

“Eventually, five of them took shares in the colt and their faith was well and truly justified on Saturday.

“Apart from becoming good mates, they’re great owners as well. Really very supportive and so passionate about their horse.

“This kind of thing is great for racing in Australia. I thought the pressure was on before Saturday, but that’s going to be a hard act follow,” Morgan jokes.

“I had really wanted for the owners to get a win out of the horse early and toyed with the idea of taking Sircconi to Echuca or somewhere similar, but the colt ended up showing signs of being a bit special from the start and so I gave him a run at Moonee Valley last November where he finished midfield. I then brought him back for Sandown on 22 February where he ran a very good second.

“Based on the Sandown run, I thought he deserved a chance in the Sires’ and he stepped right up on Saturday.

“I’ve trained a couple of Group Two winners in the (18) years I’ve been training and always manage to find a stakes horse or two from the eight to 10 I buy each year, but Sircconi’s win was pretty special.

“Let’s just hope he can cap off my career with a Group One.”

Not surprisingly, Morgan is a big fan of Sircconi’s sire, Nicconi, who stands at Widden Stud.

“He does a very good job that stallion,” Morgan adds. “He only stands at a fee of $11,000 but he gets a bunch of winners. Sircconi was a lovely yearling with a lot of good bone. I only paid $80,000 for him and as of Saturday, at only his third start, he’s doubled that and with hopefully plenty more to come.”

Widden’s Ryan McEvoy says Morgan is one of many disciples and points out Nicconi was the most popular stallion in Australia in 2016, covering 226 mares: “”Nicconi has established himself as one of Australia’s best value young stallions with 11 stakes winners to date including two in the last seven days with Sircconi and Time Awaits last week in the 2YO Cinderella Stakes in Adelaide,” McEvoy points out. “It was certainly no surprise to see him prove so popular last season with breeders. He’s a young stallion with an enormous future given the strength in numbers and quality coming through for him.”