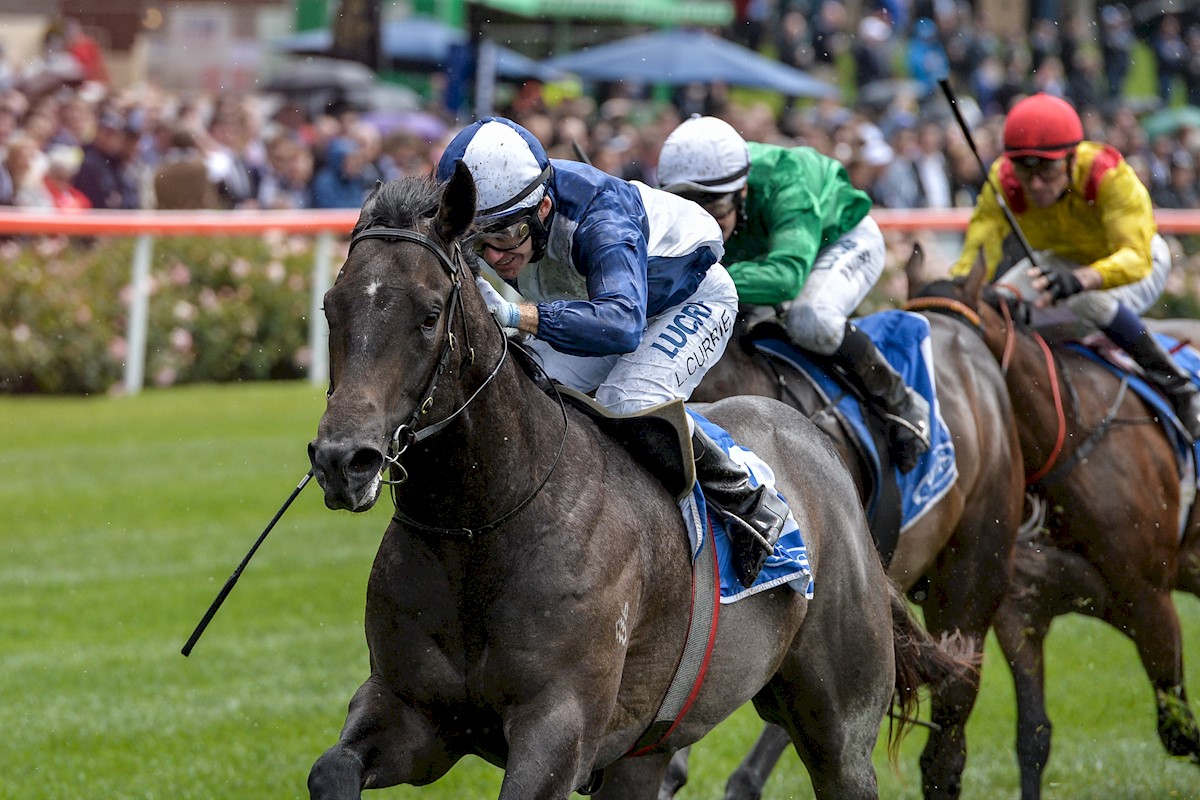 It proved to be a remarkable weekend for the Arrowfield Stud based stallion, Snitzel, who was represented by three stakes winners in a little over 24 hours, taking his black type tally to 45.

But while Snitzel’s bona fides were well and truly established before Azazel ran away with the $250,000 Inglis Banner at Moonee Valley on Saturday, before Young Man Power’s Group victory in Japan, and before First Course’s first in the Sale Cup, his three-peat perfectly illustrates the level of global and domestic investment in the Australian thoroughbred industry.

For instance, Azazel is the result of a long-standing joint venture between Arrowfield and one of the world’s most famous breeders in His Highness The Aga Khan.

Boasting a pedigree that includes European Champions such as Sakhee, Pressing and Mastercraftsman, Azazel was purchased by Tony McEvoy for $310,000 at the 2016 Inglis Melbourne Premier Yearling Sale and commenced his career with a clean slate by winning the Banner comfortably.

“That win (by Azazel) was a dream result in any language and really satisfying for both us and the Aga Khan studs,” Arrowfield’s Bloodstock Manager, Jon Freyer, enthused. “We’ve enjoyed a strong association with the Aga Khan over many years and apart from Azazel selling well, the colt looks to have a very bright future too.

“Naturally enough, all of us have been keeping a close eye on the two crops sired by Redoute’s Choice (sire of Snitzel) at the Aga Khan’s French stud, Haras de Bonneval, and we’re getting a lot of good feedback from over there.”

Similarly, Haras de Bonneval’s manager, Georges Rimaud, was excited by the win of Azazel and said: “We always felt that Aga Khan families would do well in Australia and this result should boost confidence in purchasing our stock as more representatives of those families become available on the Australian market. Redoute’s Choice’s first European crop is looking very promising – we’ll now have to work on a stallion to follow in his footsteps!”

Freyer was also buoyed by the win of Young Man Power who proved too strong in the Group Three Tokyo Fuji Stakes, a third career stakes victory for the 4YO entire, which  takes his earnings to around A$1.8 million.

“Young Man Power is the result of another important relationship, with the Yoshida family and the Shadai Stallion Station, which shuttled Snitzel to Japan in 2007 and 2011,” Freyer explains. “Katsumi Yoshida’s Northern Farm bred Young Man Power, and in Australia has worked with Arrowfield to breed Group One winners Hot Snitzel, Reaan, Sweet Idea and Weekend Hussler, among many other winners.

“These kind of long-term relationships have been instrumental in the success of Arrowfield over the past three decades and now Australian racing and bloodstock auctions are attracting a whole new wave of investors from around the world.

“Another great example is 5-time Group One winner, Miss Finland, who was bred by Arrowfield with the late Sheikh Maktoum al Maktoum and is the dam of last year’s Group One Thousand Guineas winner, Stay With Me.

“VRC Oaks winner, Brazilian Pulse, is yet another. She’s a granddaughter of an Aga Khan mare from Shergar’s family and she foaled a Redoute’s Choice filly last Friday for Arrowfield and Mr Yoshida.

“It’s terrific for Arrowfield of course, but more importantly, I think it underpins the faith that breeders from all over the world have in the Australian industry.”

“The domestic strength of our industry is equally important and that’s what First Course represents,” Freyer adds. “The Whishaw family and the Breeses have earned great respect as breeders and vendors over several decades, and we’re very pleased to see an Arrowfield-sired horse join their list of stakeswinners.”

“First Course is from Snitzel’s second crop, while Azazel is from his brand new crop of 2YOs. A lot of success and a lot of good stories in between … and hopefully quite a few more to come. For everyone.”