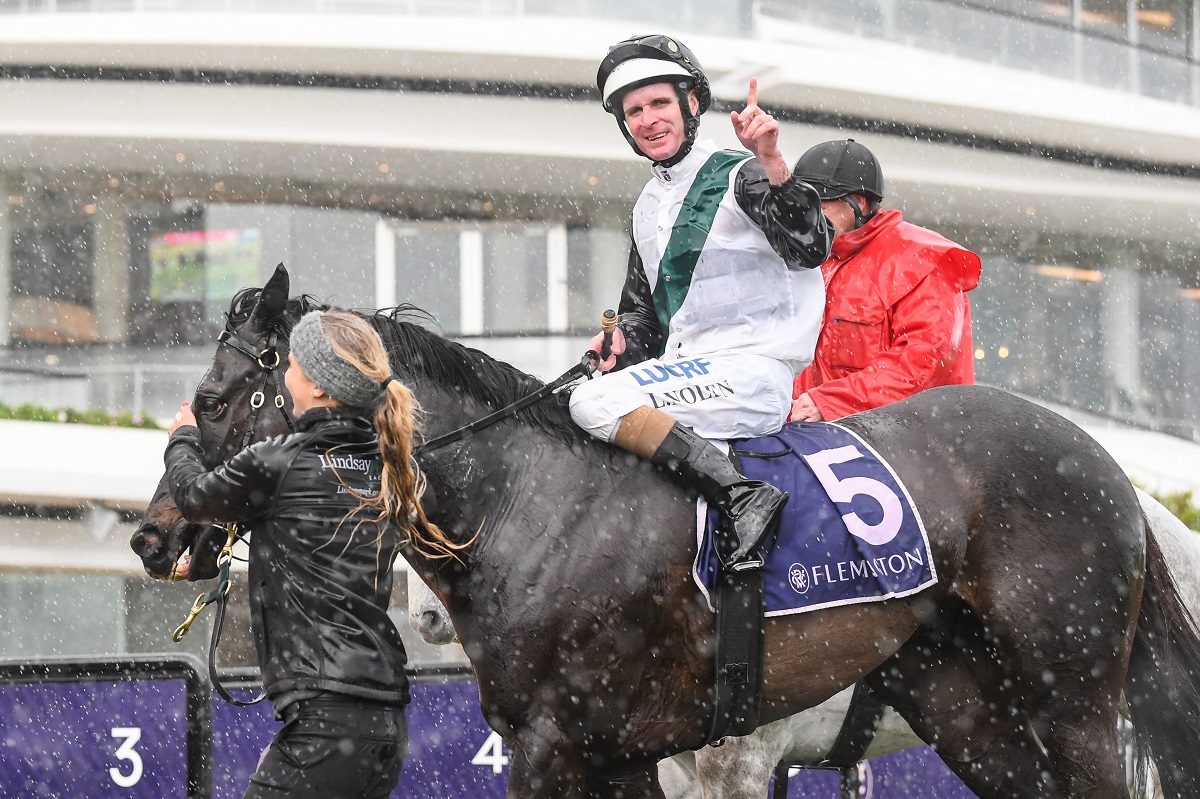 However, the ‘straight six’ benchmark wasn’t in any danger of being broken in the Group Three Aurie’s Star Handicap on Saturday, particularly given the Heavy 8 surface.

Nevertheless, it was a memorable performance from the Lindsay Park trained, So Si Bon, who flew home over the final stages to record his second career stakes victory.

First run in 1994, the Aurie’s Star was elevated to black type status in 2005 and has been something of a springboard to Group One success with Hey Doc (2017) going on to capture the Manikato, while last year’s winner, Voodoo Lad notched up a Winterbottom.

Indeed, David Hayes was quick to point out at Flemington – amidst the heavy rain and hail (yes, hail!) – that he trained inaugural Aurie’s Star stakes winner, Niconero, who subsequently added five Group Ones to his resume.

So Si Bon’s part-owner, Harry Petrie, certainly has his fingers crossed that his beloved neddie can follow the trend and win a Group One of his own.

Yet, while many shivered and sought shelter at Flemington, Petrie’s biggest worry was avoiding sunstroke as he’s currently holidaying in Spain where the weather hovers between 30 and 40 degrees.

“We managed to watch the run on Racing.com and it was a terrific performance from So Si Bon,” Petrie enthused. “He has had his issues but improved immensely since being gelded a couple of preparations back.

“So Si Bon is by So You Think and from a good family, but he was uncontrollable and got banned a couple of times through his antics. He had won a stakes race (Lord Stakes), along with Group One placings (Sir Rupert Clarke and Rosehill Guineas), but really wasn’t going to be commercial until cracking a big one. Yet, he was never likely to win one unless his attitude changed.

“So, the decision was made to geld, which settled him down and now, fingers crossed, a Group One will come his way.”

One of 19 stakes winners for Coolmore Australia’s So You Think, So Si Bon is from the multiple black type winning 2YO, Black Minx, in turn a daughter of Danehill’s Group Two winner, Faith Hill.

The Aurie’s Star takes So Si Bon’s tally to three wins and 11 placings from 38 starts, with the 6YO also having run fourths in the Australian Cup and Victoria Derby.

Albeit watching the latest win from afar, Petrie – who is retired from his Dental Laboratory business – has had a long-time interest in ownership, racing his first horse with Hall of Famer, George Hanlon.

“That was Strawberry Ranch who was originally with George before being transferred to Robbie Laing, who won the 1990 Standish Handicap with the horse for me (coincidentally down the ‘straight six’),” Petrie recalls. “We owned a few horses after that, but then I had a break for a while until I decided to phone Robbie after I found out he had purchased, from memory, about five So You Thinks at the (2015 Inglis) Easter Yearling Sale. I told him I’d be interested in the black one out of the Lonhro mare.”

So Si Bon is next likely to appear in the Group One Memsie Stakes over 1400m at Caulfield on 31 August before possible tilts at the Group One Sir Rupert Clarke Stakes on 21 September and Group One Toorak Handicap on 12 October. Even a charge at a Winx-less Cox Plate has been mooted.

“I’ll be flying back into Australia on the 30th and going to see him run the next day,” Petrie enthused. “It’s hard to get a good horse, but who knows, maybe So Si Bon has that Group One in him.”

Unless the weather has improved Harry, we suggest you take your time getting back!

So Si Bon, meanwhile, continues the run of success for boutique Victorian property, Morning Rise Stud, which bred the galloper and, according to principal, Robert McClure, he was a cracking type from day one.

“When we took him to Easter he was an absolute rockstar to be honest,” McClure told ANZ Bloodstock News. “He had this big forelock coming down … the white feet.

“Black Minx (So Si Bon’s dam) was an attractive looking black horse as well, so he got the whole lot, along with the ability.

“We also had Northwest Passage (by So You Think and a 3-time stakes winner) at Easter so it was a pretty good sale for us.”

Unfortunately, Black Minx died in 2014 after leaving just four foals, but the McClure family owns some 20 quality mares – including Group Three winner Crown Witness (visiting I Am Invincible this spring) and Northwest Passage’s dam Danevade – while Morning Rise “share another 14 with Coolmore and a couple with Yarraman Park”.

Indeed, there appears to be exciting times ahead for the McClures who also secured interests in Invincible Star ($1.45 million) and Savvy Coup ($1 million) at the 2019 Magic Millions National Broodmare Sale.