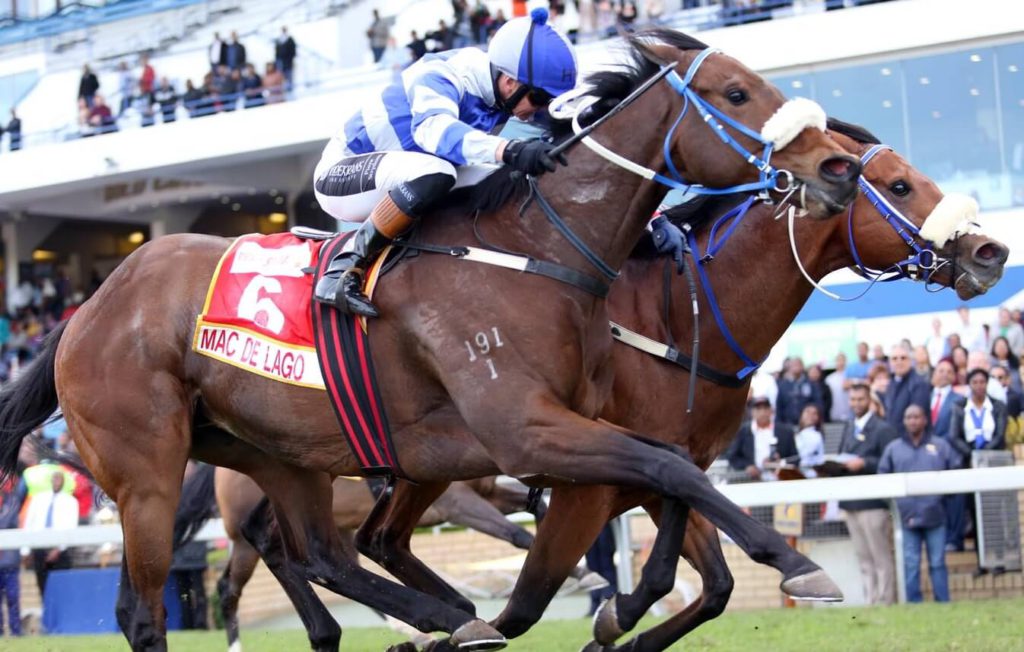 Bloodstock agent, James Bester, had to stop and think.

In the wake of Mac de Lago’s victory in Saturday night’s Rising Sun Gold Challenge at Greyville, Bester was quickly tallying up the number of Australian-bred Group One winners he has sourced for South African racehorse owners over the years.

Originally from South Africa, Bester has maintained a close association with its racing industry and was instrumental – in the early 90s – in luring a number of the country’s owners and trainers to major Australian sales. They came, they saw, they took them home and they’ve conquered.

And while South Africa’s Champion 2YO, Harry’s Son ($60,000 at 2013 Gold Coast Magic Millions) would be hard to beat in the favouritism stakes, Bester points out that Mac de Lago’s Group One was particularly satisfying.

Purchasing the then colt for $65,000 from the Coolmore draft at the 2013 Inglis Melbourne Premier Yearling Sale, Bester was acting on behalf of leading South African owner and breeder Hassen Adams.

“I’ve bought a number of horses for Hassen, including Gimmethegreenlight, a More Than Ready horse who won the Group One Queen’s Plate and is now standing at stud,” Bester revealed.

“Mac de Lago is a gelding so he obviously won’t be replicating Gimmethegreenlight by going to stud, but a Group One is a Group One and I don’t think anyone would be complaining.

“I’ve always been a huge fan of Mac de Lago’s sire, Encosta de Lago, and had quite a bit of success with him, purchasing the likes of VRC Sires’ Produce winner, Von Costa de Hero. Hassan likes Encosta de Lago too – even more so after Saturday!

“He (Mac de Lago) really stood out on type and had a better walk than most of the Encostas – he looked like a real athlete and to be perfectly honest, I was a little disappointed that he hadn’t really delivered before the Gold Challenge.”

Mac de Lago won his first two starts for trainer Weiho Marwing but the closest he had come to black type success prior to Saturday was a Group Two second in May last year.

“All is forgiven now though,” Bester jokingly adds. “And what a super sire Encosta de Lago has been … Mac de Lago is his 26th individual Group One winner and 110th stakes winner overall. Just an amazing horse.

“And his influence is showing no signs of waning either with horses like Chautauqua flying the flag.

“Mac de Lago is now heading to South Africa’s premier race, the Durban July Cup which, despite being a handicap, is probably their equivalent to the Cox Plate.”

Coolmore Australia’s Sales & Nominations Manager, Colm Santry, was also chuffed with the win of Mac de Lago as it’s the eighth Group One winner bred on the stud since the beginning of 2015: “It’s been an incredible run of success and we’re obviously hugely grateful for the continued support of our clients. Gareth Downey showed a lot of faith in Macavelli Miss (dam of Mac de Lago), breeding her in Australia over a number of seasons and to his credit, he always maintained that her progeny would get better and better with time. His confidence in the mare looks well-placed now as not only has Macavelli Miss bred a Group One winner, she also has a pretty high-class horse in Hong Kong in Dr Good Habit.”

The influence of Australian-breds in South Africa continues to grow and auction house, Inglis, shows that the Melbourne Premier, in particular, has been “a happy hunting ground” for South African investors with its graduates including Champion 3YO, Alboran Sea, Fursa, The Conglomerate and superstar Igugu.

Another More Than Ready horse in Entisaar was sold at the Inglis Easter Yearling Sale before becoming Champion 2YO Filly in South Africa.

Based on figures to the end of the 2014/15 racing season, Australian-bred horses consisted of just 3% of South Africa’s racing population yet had won well over 100 stakes races in the previous five seasons. Throughout 2014/15, Australian expats had taken out 18% of the country’s black type races and 23% of the Group Ones.

You can now add a rising son of Encosta de Lago to the list.