Star Comes Out To Play 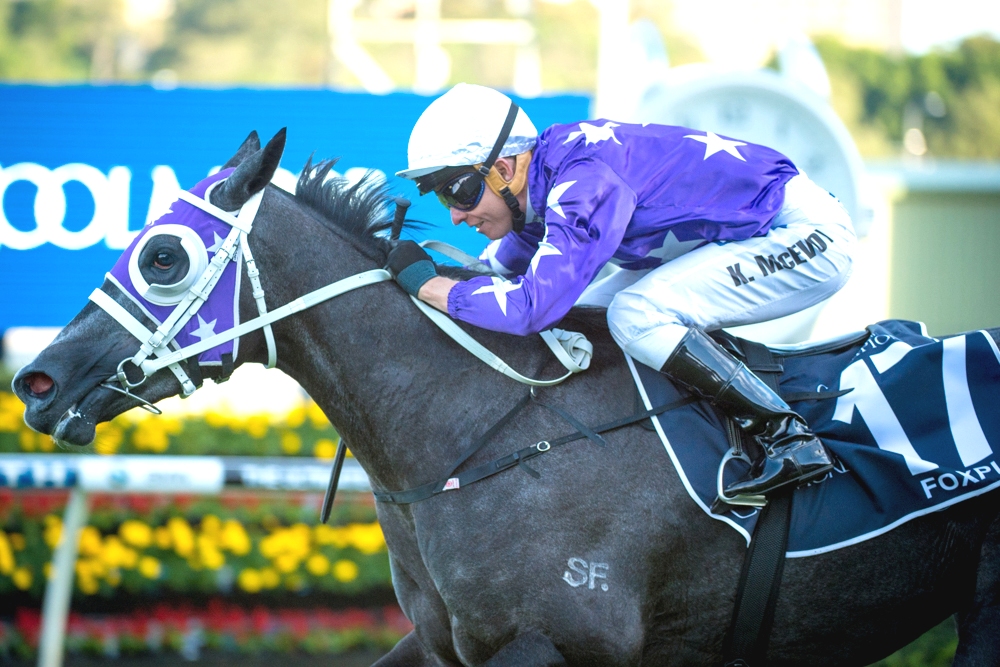 Denise Martin had already done the rounds – several times in fact – and was sitting ringside when the grey filly by Foxwedge entered the Gold Coast Magic Millions ring.

Bidding to $160,000, the filly was knocked down to Martin and, such is the confidence in the Star syndicator, four of the women at the table instantly jumped in to take a share.

“Girls love greys and apart from those sitting with me at the table, I had the filly fully syndicated in about an hour – an all female ownership,” Martin recalls.

Grey power (not to mention Martin’s acumen) has paid off ever since with the filly, now named Foxplay, winning five of her 13 outings and over $1.2 million in stakes, culminating in her first Group One success in the Coolmore Legacy Queen of the Turf Stakes (1600m) at Royal Randwick last Saturday.

Along the way, Foxplay has also won a Phar Lap, a Furious and a Tea Rose – all at Group Two level.

“That was a fantastic result … she’s a wonderful filly. I have spoken to Chris (Waller) and she’ll most likely spell now – a holiday up in Queensland – before coming back for the Melbourne spring.”

Foxplay is the 12th Group One winner for Martin’s Star Thoroughbreds and, somewhat surprisingly, the filly was Waller’s first Group One winner – apart from Winx of course! – in over 12 months.

“Denise is unbelievable, she has been the most supportive person you can imagine,” Waller claims. “She has a great business and brought a lot of people to us … she just looks after them like you wouldn’t believe.”

It’s an assessment with which the owners of Foxplay would wholeheartedly agree!

Martin and her Star owners weren’t the only ones cheering on Foxplay in the Coolmore Legacy as the victory also caps off a couple of memorable weeks for Newgate Farm’s Henry Field.

On the opening day of The Championships at Royal Randwick, Invader – part-owned by Newgate – won the Group One Inglis Sires’ Produce.

That opened the door to three days at Newmarket where the farm averaged $520,000 for seven lots sold at the Australian Easter Yearling Sale – including a Fastnet Rock half sister to 2016 Melbourne stakes winner Zamzam, for $1,150,000.

And then, on Friday night, Newgate was involved in the purchase of several mares at the Chairman’s Sale for big dollars.

Enough to keep accountants sharpening their pencils for a month.

Come Saturday, Newgate was a headline act again when Foxplay – raised and sold by the farm – won her Group One.

Not only was this Foxplay’s first Group One it was also a first for sire Foxwedge.

Although the Newgate roster is now thirteen strong, Foxwedge was a foundation stallion and a considerable source of pride for stud principal, Henry Field.

“That was a great result for Foxplay,” Field points out. “Great for Chris Waller, great for Denise Martin and great for all the owners.

“But it was also a real milestone for Foxwedge and Newgate because Foxplay is from the sire’s first crop.

“Another of the Foxwedges in (Group Two winner) Volpe Veloce was sold by us as a weanling as was (stakes placed) Petition.

“It’s terrific when you can come to the sales and get great money for your yearlings but it’s really about the results on the track.

“We make sure that our stallions are supported to the hilt and are sent high class mares.

“With SF Bloodstock and Matthew Sandblom, Newgate purchased eight mares last Friday night and all of them are going to our stallions. And with the Easter Broodmare Sale commencing on Tuesday, I’ll expect there will be a few more by the end of the week.”