Star Thoroughbreds racemare an Invincible force on the Gold Coast 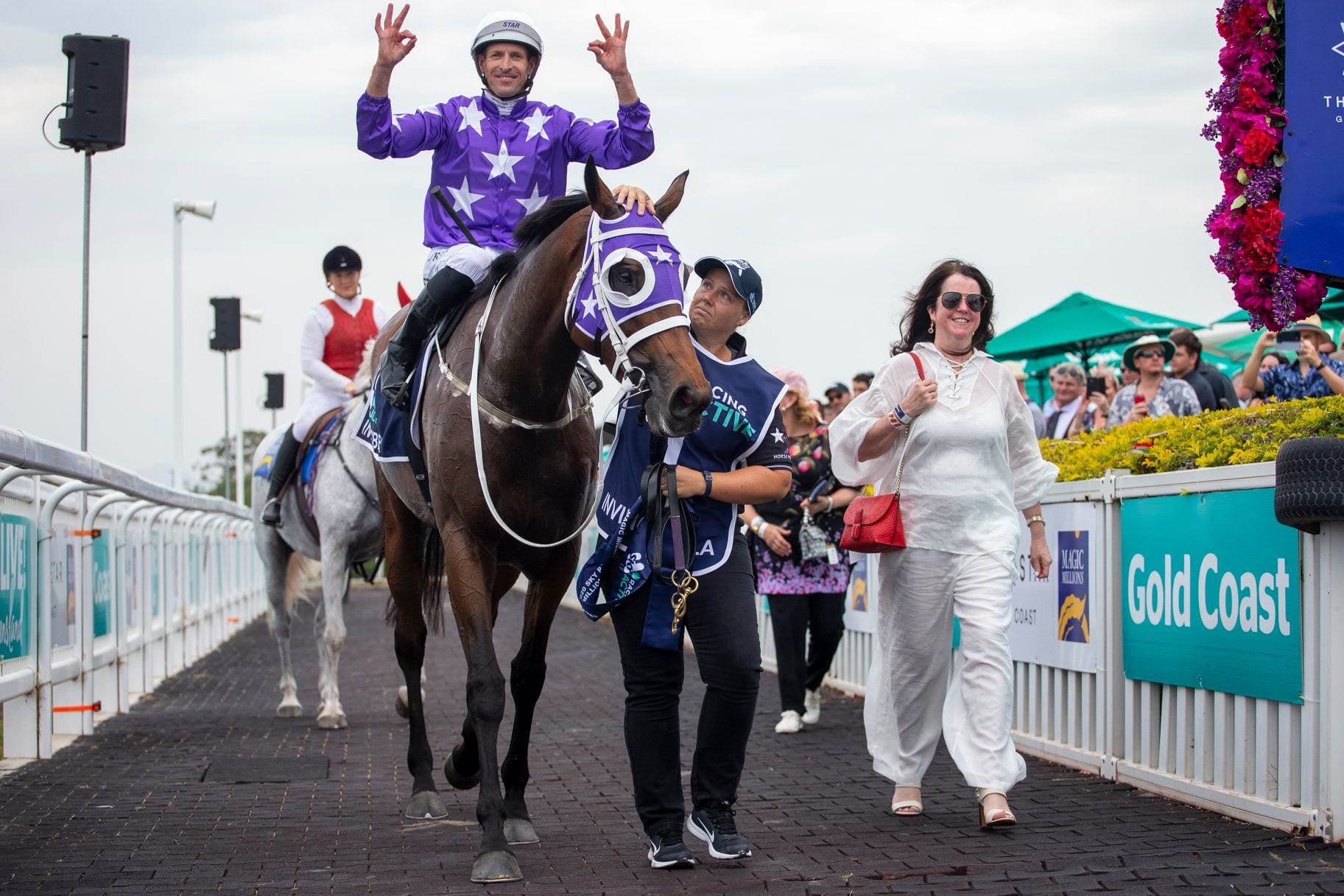 Not for the first time and almost certainly not for the last, Chris Waller has been instrumental in delivering yet another history-making chapter in Australian racing.

Employing a philosophy towards training racehorses that is as uncomplicated as it is successful, Waller conjured up a Magic Millions moment for the ages – with the ageless.

Precocious two-year-olds are the obvious banner horses of the Magic Millions racing week but for longevity with consistently high-class results, the Waller-trained Invincibella stands alone.

Invincibella wrote her name into the record books as the first horse to win the same Magic Millions race three times.

A rising seven-year-old, she posted her third win in the Magic Millions Fillies and Mares over 1300m.

It turned out to be the easiest of her three victories and provided Waller, jockey Hugh Bowman and prominent syndicator Denise Martin with another Magic Millions success.

Waller has trained eight winners on Magic Millions day to be second on the all-time list behind Gai Waterhouse.

With seven winners, Bowman trails only Corey Brown as the leading jockey.

While Driefontein’s 2YO Classic win in 2011 ranks as the most important for Star Thoroughbreds, Invincibella’s victory this year will be more special than most.

And for that, Waller can take most of the credit.

He learnt from Winx that care and meticulous planning to equine management can foster greatness.

It’s an approach to training that will continue to serve him well even if the results are nowhere near as a mind-boggling as Winx’s achievements.

“We’ve got a great team and we’re very proud of our horses and look after them,” Waller said.

“I think after a few years, we’ve seen it with a few other good horses in the stable.

“We like our young horses and two-year- olds, but the four, five, six-year-olds, they’re still very much part of the team..

“Keep things simple and they keep turning up and giving their best. It’s a very special feeling to be part of horses like that.”

Bred by Andrew and Nielma Grant-Taylor, Invincibella made $185,000 at the 2015 Gold Coast Magic Millions as part of Catriona and Royston Murphy’s Sledmere Stud draft.

A half-sister to the Melbourne stakes winner Secret Blaze, Invincibella is the first foal from Abscond, an unraced Galileo half-sister to Victoria Derby placegetter Light Up Manhattan.

Other noted horses in her pedigree include Adelaide Cup winner The Hind and Geelong Cup winner Oregon Star.

In 43 starts, Invincibella has scored 12 wins with another 12 placings and her latest victory has taken her prizemoney to $3.07 million, sweeping her past Viddora as the highest stakes earner for Yarraman Park’s all-conquering sire I Am Invincible.

Bowman will be forever known as Winx’s jockey but he has great admiration for Invincibella despite missing the mare’s Group One breakthrough in last season’s Tatt’s Tiara.

“The management of her to keep her coming back, year after year, and to race at the top level throughout the year at the other carnivals is just extraordinary,” he said.

“I’ve had a great association with her. She’s got a really soft spot in my heart. I am just so proud she could do it once again.”

For Martin, there’s no doubt she can match her latest star for sustained excellence.

Syndicating racehorses can be a tough business but Martin has been in the game since the early 1990s and Sebring’s 2008 Golden Slipper win confirmed she is here to stay.

She has been active again at this year’s Magic Millions sales, buying 11 yearlings in Book 1 through agent Brett Howard from Randwick Bloodstock who recommended Invincibella as a yearling.

“At the time she was quite big, I thought maybe too big, but he insisted I buy her and she’s been remarkable,” Martin said.