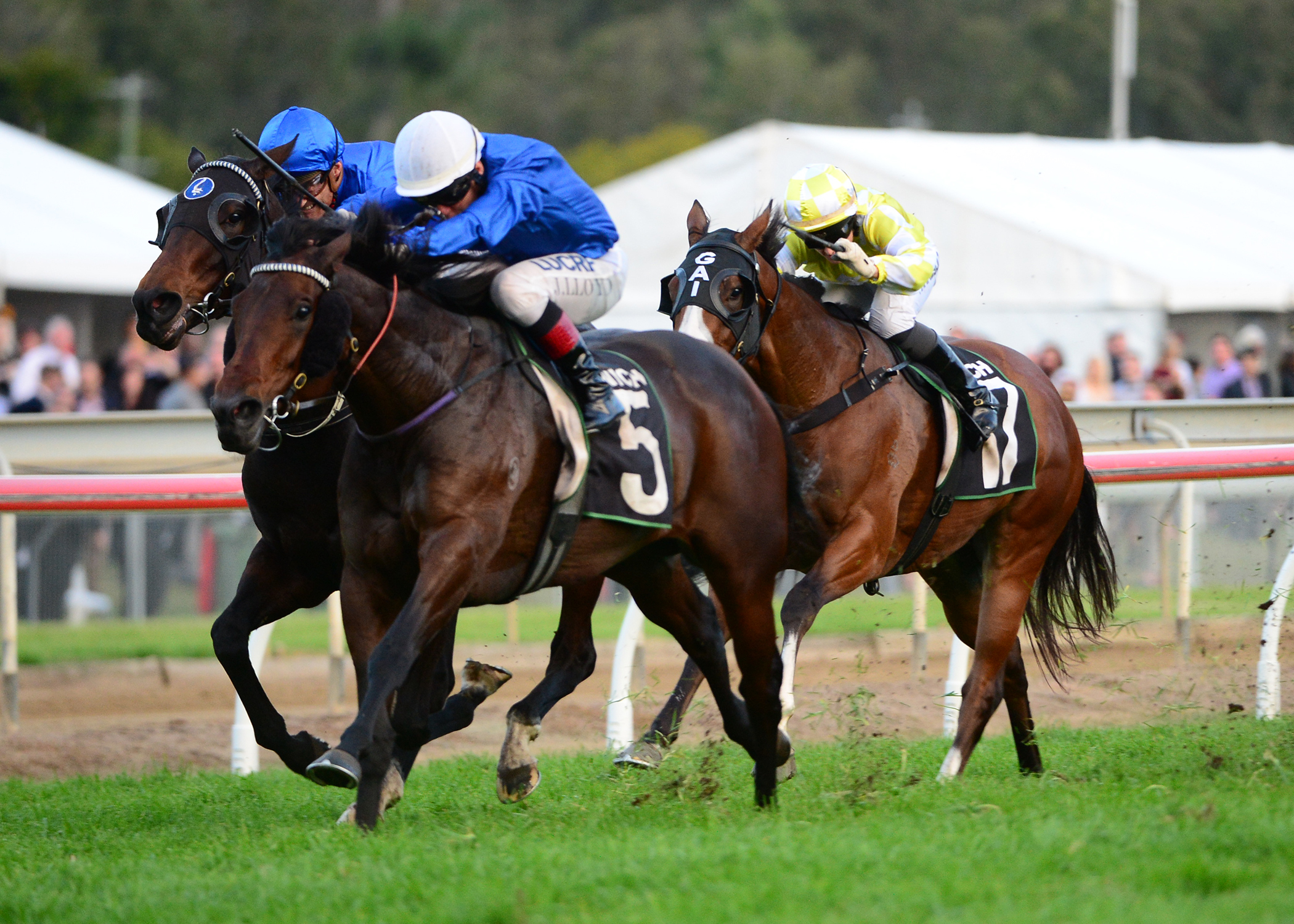 This truly was a match made in heaven. Street Cry over Divine Madonna.

Does it get any better? After all, the ‘Cry’ from breeders down the years has always been to “breed the best to the best and hope for the best”, but let’s face it, the enigma that is thoroughbred breeding pays little regard to axioms.

Well, most of the time.

This time though it seems someone got the memo with the Street Cry x Divine Madonna mare, Maternal, capturing the Listed Sky Gai Waterhouse Classic over 1350m at Ipswich on Saturday, notching up her first win at stakes level.

The Darley home-bred held off Godolphin stablemate, Kinshachi, in a thriller and has now compiled six wins and five placings for $235,885 in stakes. The well travelled 4YO can lay claim to victories in three states – Victoria, NSW and Queensland – and the stable will make up its mind in the next day or two as to whether Maternal backs up in the $500,000 Group One Tatts Tiara this Saturday.

Interim Godolphin trainer, Darren Beadman, couldn’t be on hand to watch Impending win the previous week’s Group One Stradbroke Handicap, due to illness, but was front and centre at Ipswich and enjoying every moment.

“It was like watching a blue army coming down the straight,” Beadman pointed out, referring to Godolphin’s familiar royal blue silks as Maternal and Kinshachi fought out the finish. “The win was also satisfying given that I rode a lot for Gai (Waterhouse) and to win a race named in her honour is a big thrill.”

Maternal’s breakthrough at black type was bitter sweet for the Darley juggernaut, again underscoring the massive loss to the thoroughbred industry of Machiavellian stallion, Street Cry.

Winner of the 2002 Dubai World Cup, Street Cry had already amassed a considerable record at stud by the time he died in September 2014, but his tally in the nearly three years hence has been nothing short of incredible.

With close to one in nine of his overall runners being stakes winners, that figure has increased to near one in four since his passing, with 38 of the 157 gallopers which have raced since September 2014 capturing black type races.

During that period, Street Cry’s progeny has amassed over $25 million with Winx making up a good portion with her nearly $13 million alone, but she’s also had plenty of support from the likes of Group One winners Heavens Above, Pride of Dubai and Stay With Me, here in Australia.

“When you take into account those figures, it really does underline the tremendous legacy of Street Cry,” Darley’s Alastair Pulford muses. “Just an incredible stallion. Fortunately, his sons are making their mark at stud with stallions like Street Sense (Sense of Occasion, Hallowed Crown, Dixie Blossoms etc.) getting another stakes win in Australia on the weekend via Self Sense.”

As for the other half of the equation, Divine Madonna was among the elite of her day, winning the Emirates, the Queen of the Turf, the Toorak and the Myer Classic – all at Group One level – in the space of 12 months and retired to stud with earnings of just over $2 million.

That figure was eclipsed however when Divine Madonna was offered at the 2008 Magic Millions National Broodmare Sale where she was eventually knocked down to Darley for $2.7 million.

Sent to Redoute’s Choice for the first two seasons, then to Lonhro, Maternal is Divine Madonna’s fourth foal and her highest achiever to date. Other winners include the stakes placed, La Pieta, and multiple winner Sanzio.

“She (Divine Madonna) has a rising 2YO filly by Exceed And Excel and is currently in foal to Medaglia d’Oro,” Pulford explains. “Her mating for 2017 hasn’t yet been finalised, but she’s pencilled in to be covered by (Lonhro’s Golden Rose winner) Exosphere.”

Who knows … by that time a Tiara might have been added to the mix.