Success Is For The Clearly Innocent 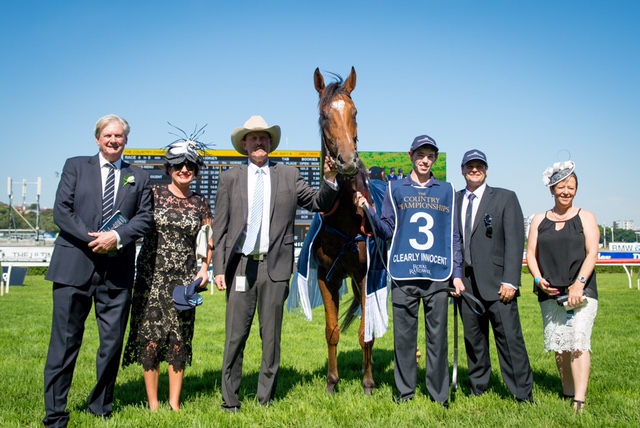 The rationale is fairly simple: “We only race what we don’t sell”.

Cressfield principal, Bruce Neill is pretty emphatic about the direction of his 4,000 acre property at Scone and is keen to give the impression that the best of what Cressfield raises, is what you see in the sale ring.

That philosophy has been borne out by the $4 million Fastnet Rock colt the farm sold out of Easter in 2013, along with a number of Group One stars since Cressfield first hung out its shingle in 2000.

But where does that leave a horse like Clearly Innocent who won Saturday’s The Country Championships Final in such thrilling fashion? Sure, the Country Championships might have been on the ‘undercard’ on the first day of The Championships at Royal Randwick, but the winner was no less impressive as the Not A Single Doubt 4YO raced away to his sixth victory (and a second) from only eight starts.

“He (Clearly Innocent) had some issues early on and was never going to be a commercial type, so we’ve raced him instead,” Neill points out.

With Clearly Innocent’s earnings now shooting over the $300,000 mark as of Saturday, it sure looks like a commercially successful decision on Neill’s part, but it would also augur well for those inspecting the Cressfield draft at Easter ’16.

“The ultimate aim is to have 10 for Easter and 10 for the Gold Coast (Magic Millions) each year,” Neill adds. “I’d like to think we’re a very progressive farm. It started out as a sheep property and with the help of people like manager Wayne Bedggood (coincidentally, the Mayor of Upper Hunter Shire) who has been with me since day one, we’ve managed to build it up to what it is today.

Neill, based in Hobart, has been professionally involved with financial services and the dairy and food industries, but clearly has a passion for the thoroughbreds.

“Our foundation mares are Regimental Gal, River Dove, Our Egyptian Raine, Champagne and Star Satire – Group One winners all – and are reflected in many of the yearlings we sell.

“We enjoy what we do but we’re also here to play in the major league.”

That is certainly the case at Easter with its eight-strong draft “attracting record inspections” and adding “… it’s been through the roof”.

But would that have anything to with Cressfield being the only farm to have two yearlings for sale by racing phenomenon Frankel? Innocent as charged!