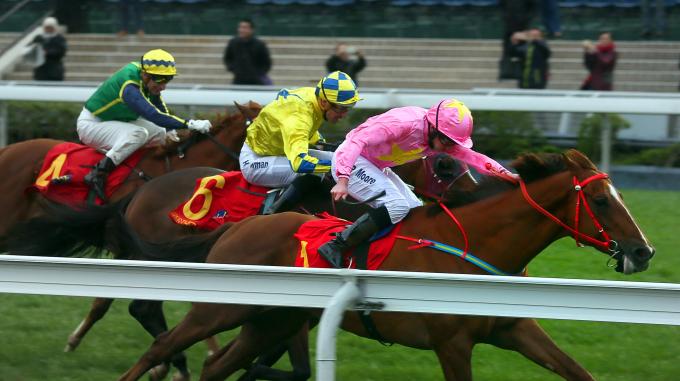 It took a brilliant ride and a similar training effort, but in the end the Australian-bred Sun Jewellery had to play the major role in winning win the Group 1 Hong Kong Classic Mile at Sha Tin on Sunday.

After a weekend in which a couple of Australian-bred runners came tantalisingly close to international stakes wins in Dubai and South Africa, Sun Jewellery prevailed in the fist leg of the Hong Kong Jockey Club’s 4YO Series with fellow Australian-bred Blizzard in third.

“I felt he had the ability, but wasn’t sure he had the class to win from the outside gate,” said trainer John Size, who also saddled the favourite Thewizardofoz who finished fifth.

“I would think he’s got a big future. He’s always promised to step up but this is a good test today, he’s come up against some nice horses and he’s beaten them fair and square.”

A son of Snitzel who raced in Australia as Tan Tat Sun and left for Hong Kong in 2014 as the winner of a Bairnsdale maiden and a lowly event at Kyneton, Sun Jewellery has now won seven races and almost $1 million million in prizemoney. He was perfectly ridden in Sunday’s race by champion English jockey Ryan Moore.

Prepared to target the Hong Kong 4YO Series, Size will start Sun Jewellery next up in the Group 1 Hong Classic Cup over 1800m on February 21, before a tilt at the final leg, the 2000m Group 1 Hong Kong Derby in March.

The 4YO is the 33rd stakes winner for his Arrowfield Stud based sire, whose yearlings averaged more than $300,000 earlier this month at the Magic Millions Yearling Sale. Snitzel is well represented in the upcoming Magic Millions Perth and Inglis Classic Yearling Sales, and sires the half-brother (Lot 135) to the triple Group 1-winning mare Winx at the Inglis Easter Yearling Sale in April.