Super Mare Gets Cash In Schillaci 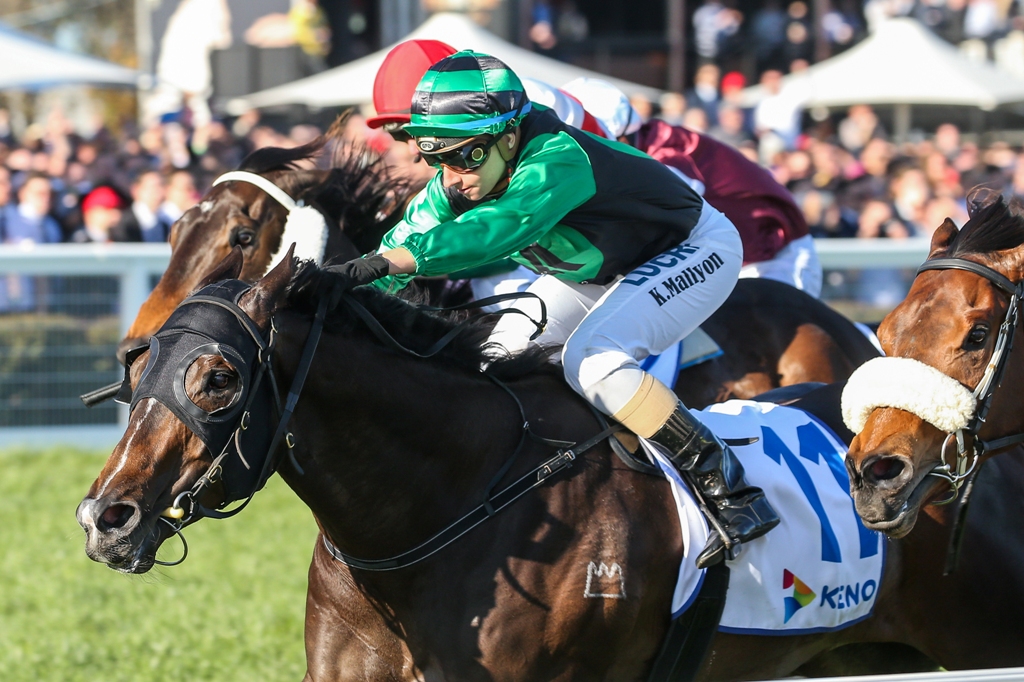 After all, Noblet’s 5YO mare had won on debut as a 2YO back in July 2015, ran third in the Group Three Typhoon Tracy in her first run at three, scored at Caulfield when resuming at four and won the Group Two Rubiton Stakes – over the Schillaci journey – in February. A pretty good first up record by any stretch!

“She’s just a terrific mare who rarely puts in a bad run,” Noblet points out. “Super Cash was absolutely flying heading into the (Group One) Moir Stakes (won by She Will Reign) a fortnight ago, but we had to miss that run and it’s been something of a balancing act to keep her in peak form … making sure you don’t do too much or too little.

“Anyway, given that she always seems to produce first up, along with drawing barrier two in the Schillaci, I was pretty confident on Saturday.”

With Katelyn Mallyon on board for the Group Two, Super Cash settled fourth before putting in a challenge at the 200m and then holding on gamely to score in a photo.

The daughter of Written Tycoon has now raced on 17 occasions for five wins (also a Listed Moomba Plate), five placings and $636,250 in stakes on behalf of owners Steve Millar and Peter Robinson.

“We’ll probably wait until the end of the week before deciding where she (Super Cash) heads to next, but there’s any number of options,” Noblet explains. “She’s paid up for the (Group One Ladbrokes) Manikato Stakes at Moonee Valley on 28 October, there’s the mares’ race (Group Three Begonia Belle) down the Flemington straight on Derby Day or the (Group One) Darley Classic (1200m) on the final day of the Melbourne Cup carnival.”

One thing is for certain, it’s been a remarkable 12 months for Noblet who also captured his first Group One success, via Silent Sedition, in March’s William Reid Stakes.

“I started out in Adelaide with Leon Macdonald and came across to Melbourne in the early 2000s, also spending a few years at Sutton Grange before heading to Caulfield around 12 years ago,” Noblet reveals. “I kicked off with six boxes but currently have 22 in work and some fantastic owners, including Steve and Peter.

“We’re only a small team but I’m proud of what we’ve achieved. We’ve got some nice horses coming through, including – eventually – the yearling full sister to Super Cash.”

Super Cash is the third winner from Dash For Cash mare, Super Bucks, who hails from a European black type family and a multiple winner in her own right.

“Peter (Robinson) and I raced Super Bucks with Lindsay Park but she had some issues and they couldn’t get the work into her, so we sent her up to Gregory Macfarlane at Gosford in NSW,” Steve Millar explains.

“She ended up winning three races for us – only country races – but she’s really found her niche at stud. Her first foal, Super Tycoon, won seven races, including four in a row in Sydney, the next foal was Super Cash and the one after that was Fast Tycoon, who has won a couple, including one in Melbourne. All three by Written Tycoon.

“She’s also got some other promising types coming through which is very encouraging.”

Millar and his wife, Kay, along with son, Matthew, have been involved in the industry for 15 years and breed from 11 mares, while having interests in 17 racehorses.

“We race all of Super Bucks’s progeny with Peter, but I also have quite a number in partnership with Cornerstone Stud and other owners,” Millar adds. “We’re over the moon with Super Cash’s win in the Schillaci and, of course, her Rubiton victory earlier this year.

“Andrew has done a remarkable job with Super Cash and we’ve had a lot of success with him.

“Kay, Matthew and I have been fortunate to race a few good horses along the way, including The Fuzz (Group Two Blamey Stakes, Group Three Geelong Cup and three other wins), but Super Cash is probably the pick of the bunch.”

So, why Written Tycoon for Super Bucks?

“Matthew really liked Written Tycoon from the very start and when he went to stud he encouraged me to buy a share in him. He’s certainly worked well with Super Bucks and I’m happy to say that we got the thumbs up recently and she’s back in foal to him this spring.”

Originally standing at a fee of $8,250 when retiring to stud in 2007, Written Tycoon has produced 21 stakes winners – including 2016 Golden Slipper winner, Capitalist – and now resides at Woodside Park in Victoria where he is currently working his way through a large book of mares at a fee of $88,000.