Take Warning – Harry’s on a roll 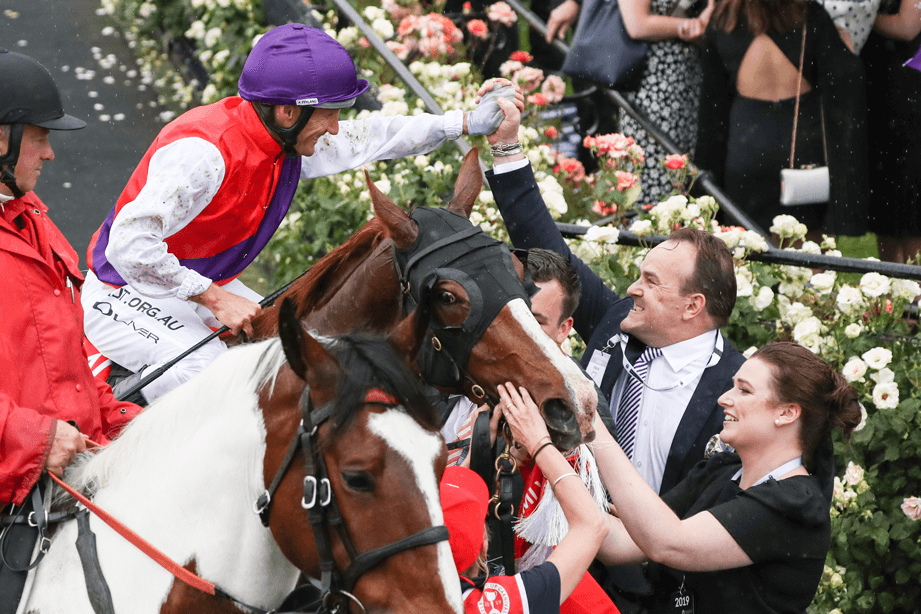 Harry Perks would be the first to admit he’s had a lot of fun in the racing caper.

Since buying his first horse in the late 1970s, Perks has bred and/or raced 110 stakes winners, with 13 of them successful at Group One level. Ah, better make that 14 Group One winners after Warning – which he sold for $65,000 at the 2018 Adelaide Magic Millions Yearling Sale – won Saturday’s $2 million AAMI Victoria Derby over 2500m at Flemington.

It would prove to be some day for the highly successful South Australian-based businessman given that he also bred, sold AND wisely retained a share in Dalasan, who had earlier captured the Group Three Network 10 Carbine Club Stakes over 1600m at Flemington: establishing himself as one of the best 3YO colts in the nation.

(Not only did Dalasan’s Carbine Club victory earn connections a $1 million bonus, Perks’s son, Hamish, and a bunch of his close mates also have shares in the colt!).

Winner of five of his eight outings – and twice Group placed – Dalasan won the Group Two Danehill Stakes in September and will now head off for a well earned break: tipped to return in the autumn for the Group One Australian Guineas.

Interestingly, while a host of those 100 plus stakes winners for Perks have been short course specialists, he is arguably the best breeder/owner of ‘stayers’ in Australia.

Gold Guru won an Australian Derby, a Ranvet and the Australian Guineas … Southern Speed, a Caulfield Cup … Rebel Raider the Victoria Derby AND the South Australian Derby … and now Warning has added another Classic.

“The first horse I owned – Matihi Bay – was by Manihi (also sire of Manikato) and she also became my first city winner, winning a couple of races as a 2YO,” Perks recalls. “I decided to breed from her and Matihi Bay’s first foal, Runaway Knight, won the (Listed) Fulham Park Plate, the first 2YO race of the season.

“We also stood a couple of speed sources like Always Welcome and Don’t Say Halo in those early days, but it was around the mid 90s that we moved all our horses across to Mill Park Stud and really started utilising stallions that could produce horses that got over a bit of ground.”

With around 15 in work at any given time and breeding from some 30 mares annually, Perks reckons the rationale is fairly simple.

“There is a lot of concentration on 2YOs and sprint racing,” Perks points out. “Fair enough. However, I’d reckon there’s only 30% or so – probably less – of breeders who focus on breeding and or racing stayers and, let’s face it, there’s a lot of money to be won if you have the patience.

“Saturday’s Derby was worth $2 million, the (Melbourne) Cup is $8 million and the Oaks is a million.”

In the hours following Perks’s memorable Flemington double, much has been made of the fact that the new million dollar earners – Warning and Dalasan (sold for $80,000 at the 2018 Inglis Melbourne Premier) – cost just $145,000 combined at yearling sales, but Perks is quick to point out the value in broodmares too.

“Dalasan is out of the multiple stakes placed Kitten’s Joy mare, Khandallah, and she cost me just $35,000 at the Inglis Sydney Broodmare Sale,” Perks explains. “Kitten’s Joy was a champion turf horse in the States and had a Group One winner in England on Friday.

“As for Warning’s dam, Livia, I purchased her fairly cheaply too. She’s a Galileo mare with a solid black type Australian family and she ran fourth to Majestic Music (also bred and raced by Perks) in the Group Two Edward Manifold.

“You don’t have to spend a lot of money on mares in this country to end up with a good result.”
Khandallah produced a So You Think filly in August and was covered by American Pharoah this spring, while Livia has a Free Eagle colt at foot and a decision will be made in the next week as to her mating in 2019.

Naturally enough, Mill Park Stud’s principal, Chris Watson, was over the moon with the results at Flemington.

“You just don’t get too many days like that!,” Watson enthused. “It’s great for us, but it’s also great for South Australia which had another winner at Flemington too with the Richard Jolly trained, Kemalpasa.

“Harry (Perks) has been such a tremendous supporter of the industry and prior to him placing his horses with us around 25 years ago, we weren’t really trading commercially.

“However, with Harry’s involvement we really ramped it up and, since then, Mill Park has had quite a bit of success for a range of clients (including Group One winners Fawkner, Divine Madonna, Undoubtedly, Princess Coup, Happy Trails etc.) and we’re very proud of the fact that all were raised on the farm.

“In fact, we’ve had some 16 stakes winners from sales in recent years and got this year off to something of a flyer with Booker winning the (Group One) Oakleigh Plate.

“Actually, Mill Park raised and sold Mummify (5 Group Ones and $5.1 million in stakes) which was raced by similar interests to Warning’s connections. Saturday’s Derby sure brought back a lot of great memories.”

Aside from Warning and Dalasan, Mill Park also sold 2019 stakes winner, Dawn Passage, on behalf of Perks, at the 2018 Inglis Melbourne Premier.

“Days like Saturday are to be cherished, but the Cup carnival is likewise a timely reminder that the sales are just around the corner,” Watson points out. “Mill Park will have drafts again for Sydney Easter, Melbourne Premier and Adelaide Magic Millions, while the youngsters for the 2020 Gold Coast Magic Millions Yearling Sale (8-14 January) are just about to start their prep.