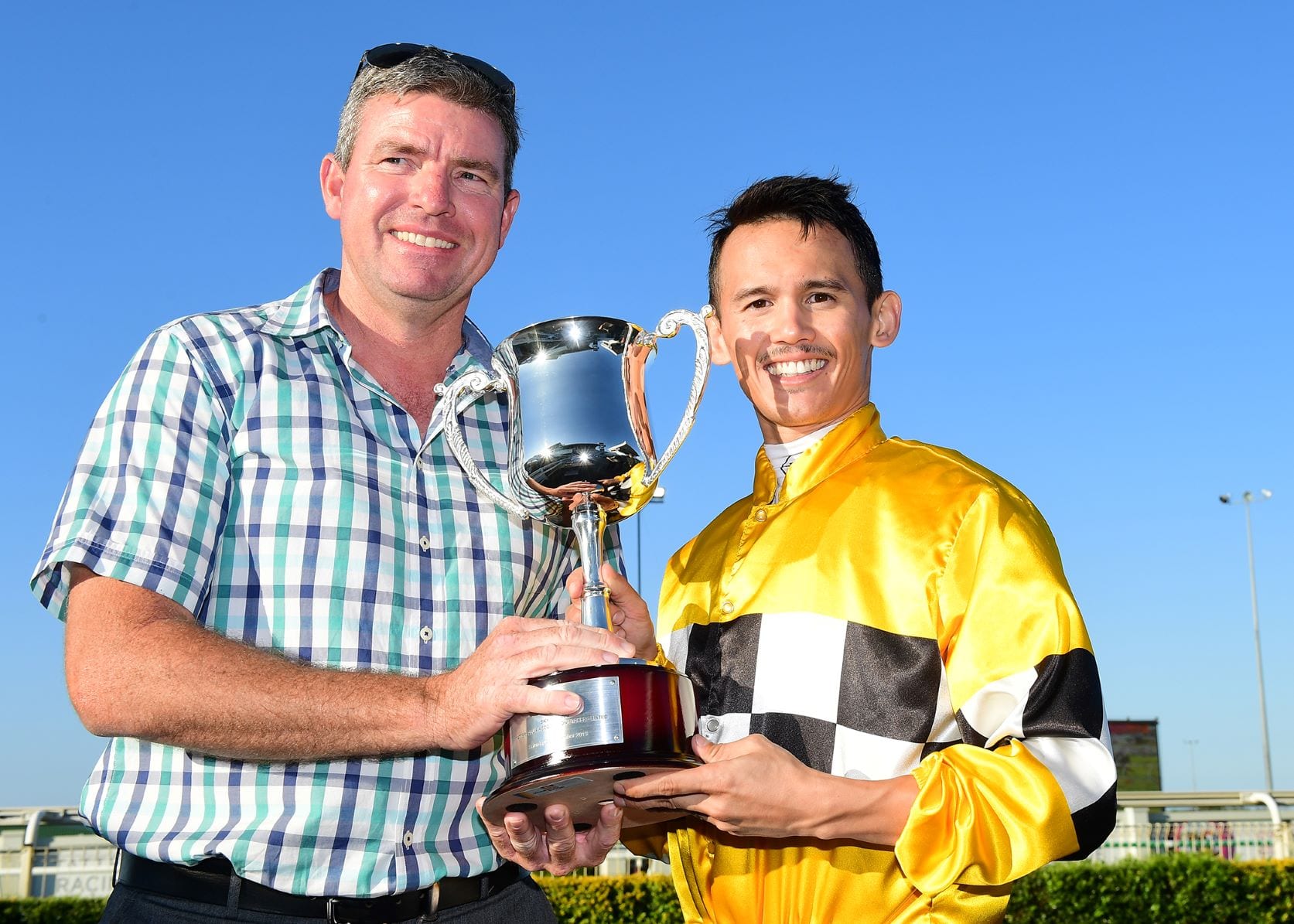 Dalan Tamblyn would be the first to admit he’s had a bit of luck fall his way in the breeding caper … racing too.

On Saturday, the Townsville based Tamblyn, cheered on from afar as his home-bred, Tambo’s Mate, broke through for his initial black type victory in the Listed Sky Racing Tattersall’s Recognition Stakes over 1350m at Doomben.

Trained by Stuart Kendrick, the Mossman 4YO now has seven wins from 12 outings with a further two seconds and $334,400 in stakes.

But it’s not likely to stop there. Both Kendrick and Tamblyn are mulling over options for Tambo’s Mate, with possibilities including The Gateway in three weeks (a win would ensure automatic entry into the $1.5 million The Stradbroke next June) and/or the $1 million Magic Millions Cup at the Gold Coast on 11 January.

“When you get a handy one come along, there are any number of choices available, so we’ll have a good think about what’s next,” Tamblyn enthused. “It was just nice to get that stakes win away.”

Black type success of any kind must have seemed a forlorn hope for Tamblyn nearly three years ago when an x-ray revealed Tambo’s Mate had a fracture in a sesamoid and had to be withdrawn from the yearling sale.

Vets were divided as to Tambo’s Mate’s future but Tamblyn decided to persist. (They were dark times indeed given that while Tambo’s Mate was recovering from his injury, Tamblyn had to contend with a very serious knee injury and life threatening blood clots which kept him out of ‘training’ for nearly a year).

7 from 12 for Tambo’s Mate as the 4YO Mossman gelding notches up his first stakes victory in the Listed @SkyRacingAU Tattersall’s Recognition Stakes over 1350m at @DoombenRacing. From a daughter of Sydney SW Georgia Belle, Tambo’s Mate is bred and raced by Darren Tamblyn pic.twitter.com/6GX4f5CtHK

“I’m a third generation bookmaker – grandfather, father, uncle – but I’m also an engineer and I bought my first horse back in 1995. She won five in a row for me and so I got the horse ownership bug hard and I’ve been breeding to race ever since,” Tamblyn recalls. “Stuart (Kendrick) initially trained for me in North Queensland and I supported his relocation to South East Queensland by letting him take all my racehorses to give him every chance of success.

“He’s trained all of my horses in South East Queensland ever since and it’s been an enjoyable and wonderfully rewarding relationship for both of us … crikey, I reckon we’d be fast approaching a 100 wins as an owner/trainer combination.

“Before Tambo’s Mate had his first start (winning over 1000m at the Sunshine Coast in February this year), Stuart told me this would be my best horse. At the time I thought that was a big call as I used to race Better Land who finished second in the (Listed) Rosebud, fourth in the (Group Three) Up And Coming and was second favourite for the (Group One) Golden Rose, but Stuart could well end up being right on the money.”

Tambo’s Mate is one of three winners from the Canny Lad mare, Passagemaker, a daughter of Sydney stakes winner, Georgia Belle.

Tamblyn would purchase Passagemaker privately for $19,000 as a tried racehorse, but while the mare only won one more race, she’s been something of a star in the breeding barn.

Passagemaker’s first foal Passatorio won five, the second – Canny And The Jet – won eight, while the next live foal – Rubestar – only had the two starts.

“It was a terrible shame about Rubestar … she could have been the best of the lot,” Tamblyn explains. “In one of her jumpouts she was leading them by probably a dozen lengths, but at her first race start she was severely checked just after the start and pushed right into the rail. She never recovered.

“I sold Passagemaker’s Choisir colt at the Inglis Sydney Classic Yearling Sale in February and by that stage Tambo’s Mate had only the one start for a very impressive win. The colt was sold for $125,000 to Newgate Farm and China Horse Club and he’s a lovely type. Good luck to them but I might actually come to regret selling that yearling.”

Still, in terms of ‘favourite’ mares, Passagemaker has to take a back seat to To Please A Lady – a half sister to the dam of Rebel Raider – which Tamblyn secured for just $16,000 at the 2005 Magic Millions Gold Coast August Sale.

To Please A Lady didn’t win a race for Tamblyn but has more than made up for it in the breeding shed.

“Her first foal won 11, the next won nine, the third won six, the fourth won 12 and the fifth has won 10!,” Tamblyn points out. “I then decided to sell her sixth foal – a Northern Meteor colt – at the 2015 Gold Coast Magic Millions and he was knocked down for $550,000. That was the first horse I had ever sold, so fair to say I now have the ‘breeding to sell’ bug as well. Unfortunately, he never won a race and that is something that will forever mystify me.”

“You can have a lot of highs and lows in this game and the Recognition win was definitely a high. It wasn’t that long ago when we wondered if he’d ever race and now we’re talking about million dollar races!”