The Further The Journey 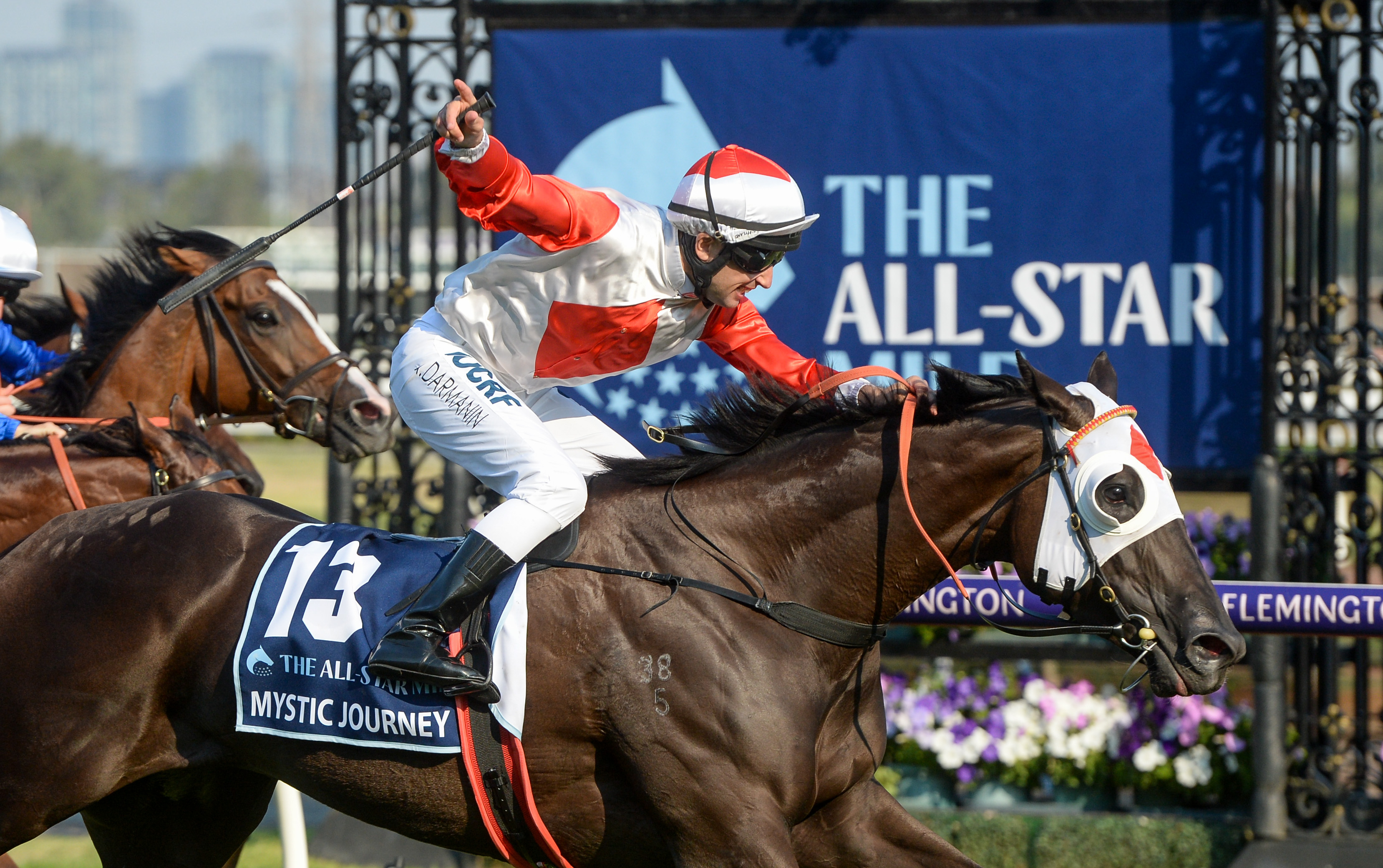 The victory of Mystic Journey in Saturday’s $5 million All-Star Mile at Flemington was so many things to so many people.

To owner, Wayne Roser, who spent just $11,000 at the 2017 Tasmanian Magic Millions Yearling Sale on a filly that has now won nearly $3.3 million.

To Adam Trinder, who, just two weeks ago, became the first Tasmanian-based trainer in over 100 years to saddle up a Group One winner on the mainland and continues to prove his gal is hardly a one trick pony.

To linebreeding devotee, Ralph Zito, who believes that simply putting X to Y won’t send you on a Mystic Journey.

To the Victoria Racing Club, which got the fairytale finish it was looking for after putting on the world’s richest mile race on turf.

And to Mystic Journey’s strapper Bronte Page, who held on as long as she could before pulling the metaphorical whip, yet couldn’t contain her delight as Mystic Journey sailed to the finish line (and by the way, if you want to know what this game is all about, check out the video at: http://ow.ly/9nIn50npaCi)

However, the biggest winner on the day was the Tasmanian thoroughbred industry which consistently proves it’s not about the size, but size of the fight.

Bred and raced by Gooree Park Stud in New South Wales, Needs Further – a half brother to dual Group One winner Hallowed Crown – won three of his five outings, including the Group Three Carbine Club Stakes.

Randwick Bloodstock Agency’s Brett Howard certainly thinks so: “When Needs Further retired, I got a call from Gooree’s Andrew Baddock who rated the horse extremely highly.

“I did too. He’d only raced once as a 2YO, finishing third behind subsequent (Group One) Champagne Stakes winner, Skilled, and also trialled well against some very good horses. He then came out and won his first race at three – by six lengths at Kembla – then won his next one in town before capturing the Carbine Club (1600m).”

Shortly after the Carbine Club, Black Caviar defeated Hay List in a barnstorming finish to the TJ Smith Stakes over 1200m. Turns out Needs Further had run a quicker final 200m than Black Caviar!

Unfortunately, Needs Further had some leg issues and was retired after just one more start.

Howard decided to purchase the horse himself, along with partners, Joe Panzera, Eddie and Carlo Deluise (Australian Thoroughbred Farm), believing Needs Further would be relatively easy to place at stud.

“Clearly there weren’t many who shared the faith,” a bemused Howard explains. “I reckon I contacted just about every stud in Australia and even some in New Zealand, and the silence was almost deafening. Stand a stallion with a name like Needs Further? Are you kidding me? They knocked him back because they didn’t like his name!”

So, Howard looked south: “Armidale Stud in Tassie could see what I saw, plus I’ve known the Whishaw family for years. Wonderful people.

“Once David (Whishaw) and his mother, Robyn, had seen the horse they had no hesitation in purchasing a large interest.

“Armidale couldn’t have done anything more in helping to promote this horse. His progeny have been so well presented at sales and he’s gotten off to an absolute flyer with his only three crops of racing age.

“Not surprisingly, we are currently receiving a regular stream of calls from mainland studs interested in acquiring Needs Further.

“We’ll obviously consider all offers and ultimately he might end up on the mainland, but history will remember where it all started. And by the way, the price may have gone up a touch!”

“We (Armidale Stud) have always set fees at realistic levels, based on prizemoney in Tasmania and, when Needs Further first came down, maidens were worth only $12,000,” Whishaw reveals. “That’s why he stood for just $3,300 in his first four seasons and $5,500 for the last couple.

“We’ve had various stallions produce Group One placegetters, but the last Tasmanian based stallion to sire a Group One winner was El Moxie and he ended up back on the mainland in a blink.

“The industry was far more insular then though and not many mares came to, or left the shores of Tasmania.

“Transport is so much better these days – if you can have Mystic Journey heading up to Melbourne the day before and winning big races, what’s stopping owners from sending down their mares for several months where the grass is greener and agistment cheaper?”

According to the Australian Stud Book, there were just 286 mares covered in Tasmania last season, with Armidale’s Alpine Eagle covering a book of 91 (including 30 from the mainland), while Needs Further covered 49.

“It’s a shame really that the Tasmanian industry doesn’t get a bit more recognition, particularly given the strike rate,” Whishaw adds.

“For instance, Needs Further was the first sire to produce a stakes winner in his year (Pateena Arena) and was leading the first season charts by Christmas, but he got nil traction.

“He’s had the Champion 2YO in Tasmania for three years running, plus he’s thrown the winner of every 2YO feature race in our state (five of the last six juvenile stakes races) … and again, nil traction.”

“Needs Further is also the fourth leading sire of 3YOs in the nation with just 29 runners: obviously Saturday helped but look at who is ahead of him and remember the numbers and quality of mares they’ve covered – Zoustar, I Am Invincible and Redoute’s Choice … all with at least two or three times the runners.”

“There should be no viable reason why the stallion couldn’t stay in Tasmania and have the mares come down here.

“I’m just grateful to those who have supported the horse.”

Tim Brown, Victorian and Tasmanian Manager for Magic Millions, believes the rise and rise of Mystic Journey is an absolute boon for the Apple Isle thoroughbred industry.

As he does with all Tasmanian Magic Millions Yearling Sale entries, Brown had inspected Mystic Journey at Armidale, leading into the 2017 auction.

“I wish I could tell you that there was something that caught my eye,” Brown explains. “But there was nothing really special about her. She was a just a neat type who appeared to be typical of the Needs Furthers which, if anything, speaks volumes for the sire.

“He’s a very good stallion and warrants much more attention from mainland breeders.

“By my reckoning, Needs Further has only had the one sell outside of Tasmania – at the 2017 Adelaide Magic Millions – but I’d image you’ll be seeing more of them coming across in the years to come.”

Brown has always been a huge fan of the Tasmanian industry and points to the state’s recent graduates: “They (Tasmania) always seem to come up with a good horse every couple of years.

“The Cleaner won three Group races in Melbourne and they loved him, while Palentino was a dual Group One winner. Mongolian Khan was bred by Graeme McCulloch’s Grenville Stud and he was twice New Zealand Horse of the Year, while you also have current million dollar earner, Hellova Street.

“Given they have so few mares in the state, Tasmania really punches above its weight!”