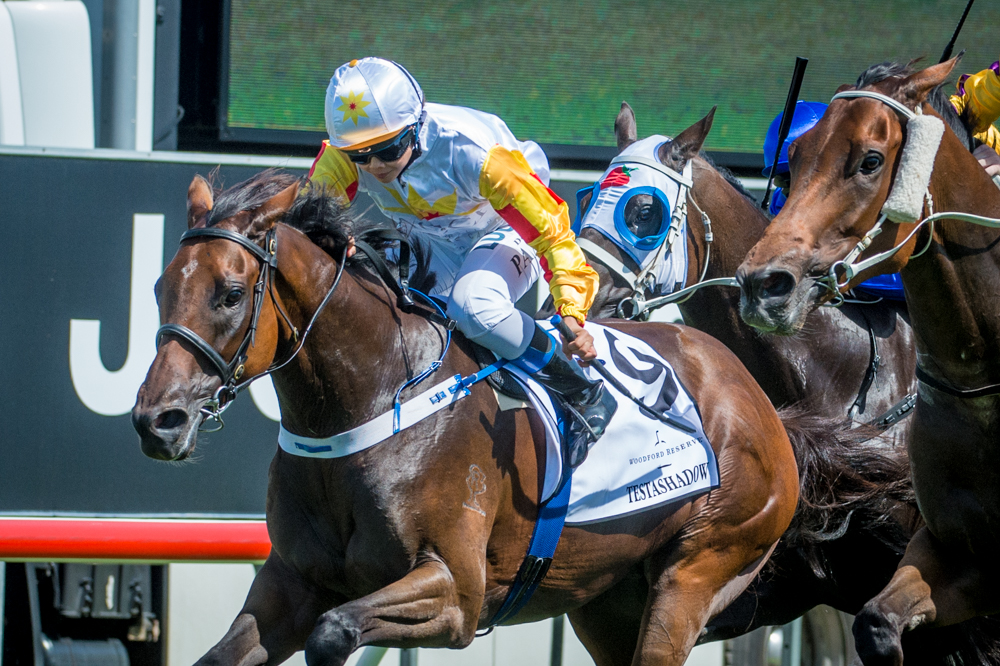 It was the kind of finish that sets the heart racing. Four across the line. All coming down to the bob of a head.

Gary Portelli, the trainer of $31 shot, Testashadow, thought his horse had finished second or third. Either way he was going to be happy: prizemoney for second in the Woodford Reserve Magic Millions Cup (1400m) was $185,000, while $90,000 for third is hardly small change.

Even jockey, Deanne Panya, wasn’t sure of the end result and had to wait until she took a look at the big screen for the verdict on the way back to scale.

However, once the number went up, the winners’ enclosure at the Gold Coast racecourse erupted with the many, many members of the Elite Thoroughbreds ownership group celebrating the upset victory.

A bemused Portelli has clearly mastered the understatement by pointing out that while he would have been “happy with second, he preferred first”.

(The $602,500 winning prizemoney has virtually doubled Testashadow’s career stakes to $1,196,085 from what is now seven wins and eight placings in 29 starts).

Portelli was quick to praise the ride of apprentice Panya, who has now won twice on the 5YO sprinter: “I took the odds to put her back on for this but it was a great ride from Deanne,” Portelli enthused. “This is a wonderful result for all the owners. He (Testashadow) has been consistent throughout his career and finished second (to Deiheros) in the 3YO Guineas two years ago.”

Portelli also made mention of Testashadow’s silks which carried the logo of the Australian Cervical Cancer Foundation.

“One of the owners, Deb Smallman, is battling cervical cancer and could only watch the race from home. We didn’t tell her about the logo and I hope she was OK with all the excitement because it nearly finished me!”

Excitement and Testa Rossa – the sire of Testashadow – seem to go hand in hand on the Gold Coast.

Purchased for just $45,000 at the 1998 Gold Coast Magic Millions, Testa Rossa won his first three races as a 2YO before eclipsing the 1999 Magic Millions 2YO Classic by over four lengths as a 6/4 on favourite.

Ultimately, Testa Rossa would win 13 of his 28 starts – six at Group One level – and a tick over $3 million in stakes before heading off to a successful career at stud in Victoria and then, Vinery Stud, in the Hunter Valley.

That $45,000 buy in 1998 has now accumulated over $74 million in progeny earnings, replicating his Magic Millions 2YO Classic victory via Unencumbered in 2014, whose own first crop of yearlings sold up to $120,000 at the 2017 Gold Coast Magic Millions.

Not surprisingly, Vinery’s Adam White is a long time fan of Testa Rossa: “There is no doubt he has been one of the best advertisements for the Magic Millions sale.

“The Magic Millions race day is proving to be a great hunting ground for Vinery stallions. Husson sired a double last year, Buffering won for Mossman, while this year both Husson and Testa Rossa got winners.”