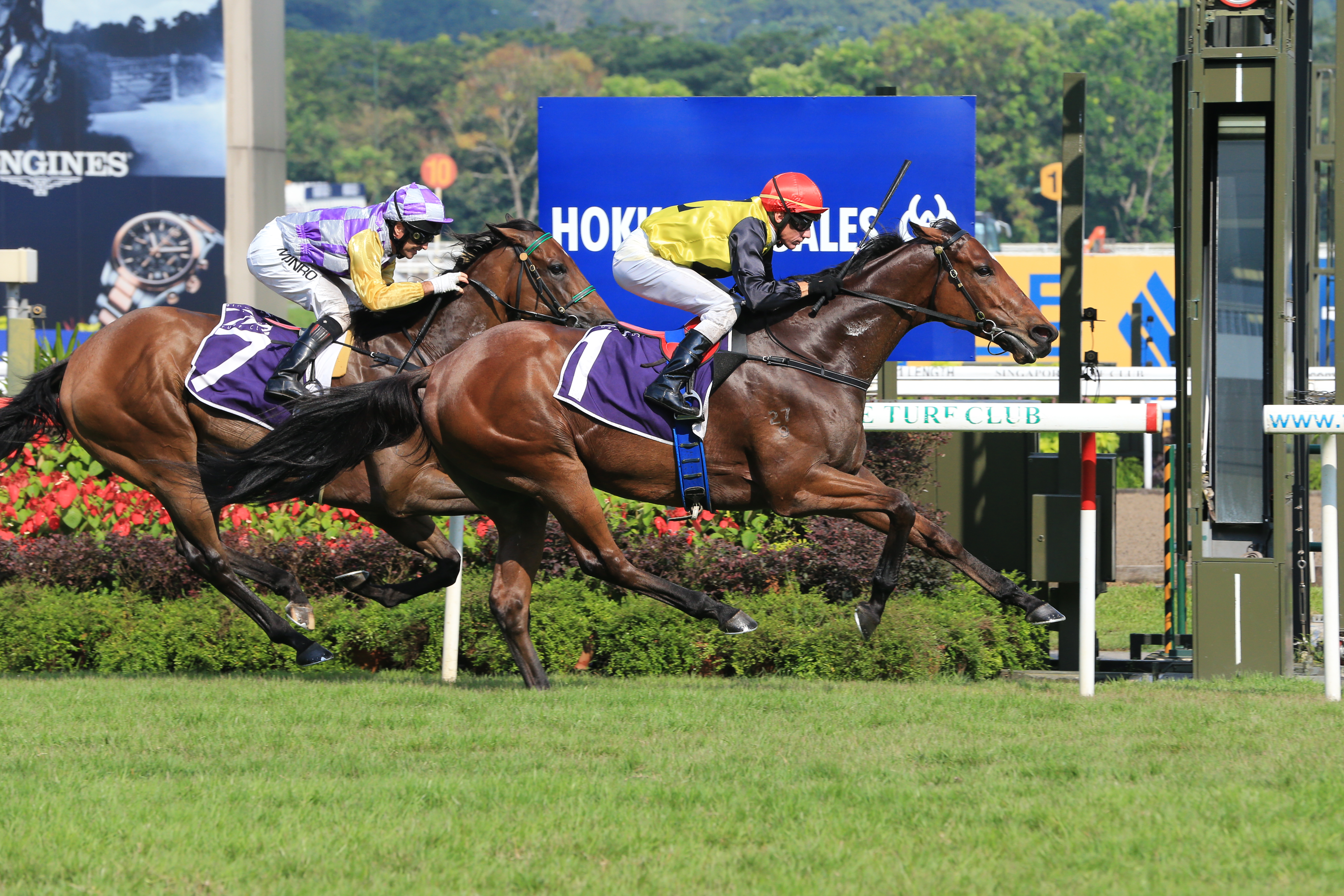 When entries for England’s prestigious Group One Darley July Cup were released last week, one name had a tendency to stand out – Zac Spirit.

Trained in Singapore by expat, Cliff Brown, the Australian-bred Zac Spirit will have a huge task ahead of him if connections decide to make the pilgrimage to Newmarket, but it’s not as if the gutsy 6YO hasn’t faced down the odds before.

A son of Flying Spur, Zac Spirit was bred by Newhaven Park and offered at the 2011 Australian Easter Yearling Sale where he sold to Brown for $140,000. Not much of a surprise there as Brown had also trained the three quarter brother, Zac Influence, to considerable success in Singapore.

Under the ownership of Andy and Genni Wong’s Zac Stable, Zac Spirit has thrived in Singapore, winning five races and being Group One placed before his first Group success in the Three Rings Trophy. Two wins later and he could add the 2014 Lion City Cup to his resume, along with the title of Singapore’s Champion Sprinter.

But then disaster struck. It was discovered after Zac Spirit ran third in the 2014 Krisflyer International Sprint that he had a small bone chip, requiring an operation and a long spell on the sidelines.

But Zac Spirit returned as good as before, peeling off two wins and a second in the 2015 Lion City Cup before an uncharacteristic seventh of nine in the Krisflyer International.

Sadly, this time it was a much bigger bone chip and it appeared he would have to be retired. However, Brown consulted with the owners and they decided to send Zac Spirit back to Australia – to Newhaven Park – to rest and recouperate.

It definitely appears to have done the trick because 11 months after the Krisflyer, Zac Spirit returned to racing – first with a second in the Kranji Sprint and then, at the end of April, a second Lion City Cup – just 0.61 seconds outside the course record established by Sacred Kingdom seven years previously.

But the July Cup? Really? Brown is under no illusions about the task ahead but falls into the ‘gotta be in it to win it’ camp: “Sure, it’s a big ask but you have to weigh up your options. For starters, there is no suitable weight for age race in Singapore for Zac Spirit over the next 12 months.

“He (Zac Spirit) is probably two or three lengths off them at this stage but he likes a bit of give and there’s every chance it will be a soft track at Newmarket.

“The distance of the July Cup (1207m) should suit him right down to the ground as well.

“And this is a really good horse, certainly the best I’ve trained since I moved to Singapore (in 2007). You’ve also got to take into account his time in the (2016) Lion City Cup – it was just shy of Sacred Kingdom’s course record that has stood for quite some time.

“There were genuine excuses for him as well on both occasions he raced against the international horses and all the Aussie jockeys that ride him – in races and at track work – reckon he’d win a Group One in Australia.

“I’m not saying he would win it (July Cup) but you never know if you don’t try.”

A popular trainer in Australia, with multiple Group One success, before shifting to Singapore, Brown also spent a season at Newmarket before taking out his training licence.

“All I know is that I reckon Zac Spirit will give it his best shot. It will be great for the owners, really something special for Singapore and, for that matter, great for Australia.”

Zac Spirit is likely to have some Australian company in the July Cup with the John O’Shea trained, Holler, attempting to win the Darley-sponsored race for Darley, while Golden Slipper, Vancouver, now under the care of Aidan O’Brien is also entered.