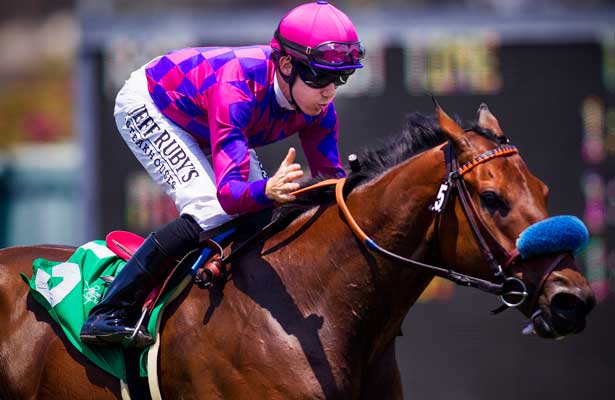 It’s difficult to comprehend sometimes just how ’24/7′ the thoroughbred industry has become.

While the black type curtain fell at Flemington around 5pm on Saturday, the centre of attention shifted to Western Australian where two stakes events were run and won by locally bred gallopers.

The focus then moved to Japan where the Australian bred, Kinshasa no Kiseki is showing himself to be a rising star of the country’s stallion ranks by producing Group Two winning juvenile, Monde Can Know, who took out the Keio Hai Nisai Stakes over 1400m at Tokyo.

Sold as a foal, Monde Can Know has only raced on two occasions for his Group Two victory and a Group Three second on debut.

Kinshasa no Kiseki, a dual Group One winner in Japan, was bred by Arrowfield Stud which stood his sire, Fuji Kiseki, in the Hunter Valley for five seasons where he produced a number of stakes winners, including Sun Classique, a multiple Group One winner in South Africa.

Speaking of South Africa, the New Approach 4YO, New Predator has added to his already impressive CV by notching up a second Group Two victory in the Charity Mile at Turffontein in the early hours of Sunday morning.

Bred in NSW and sent to South Africa after being offered as a weanling at the 2013 Magic Millions Nationals, New Predator had won the Group Two Greyville Drill Hall Stakes earlier in the year and came into the race after running third in a Group Two last month.

The Charity Mile is an interesting event where Rand 1 million is distributed to worthy causes. All up, 16 charities are paired with 16 celebrities, 16 media houses and, of course, 16 horses. A neat concept.

The road show then moved to Santa Anita in California for North American racing’s biggest program of the year … the Breeders’ Cup.

There were no actual Australian-bred runners, but we certainly made our presence felt with Choisir’s Irish bred 8YO, Obviously, racing away with the Breeders’ Cup Turf Sprint and claiming his third Group One victory in North America.

This was Obviously’s fifth attempt at the race and he became the second oldest horse to win a Breeders’ Cup (we breed ‘em tough down under!).

Co-owner Anthony Fanticola said post race that: “I can tell you, he doesn’t know he’s eight”.

Choisir is no stranger to international success with Group One winners in North America, England, France, New Zealand and, of course, Australia.

He was also something of a trail blazer for Australian sprinters, winning the Golden Jubilee and King’s Stand Stakes at Royal Ascot in 2003.

And just to wrap up the weekend, Highland Reel stole the show at Santa Anita with an all-the-way victory in the Breeders’ Cup Turf.

Winning the King George at Ascot in July and with two other Group Ones under his girth strap, Highland Reel produced a dominant display over the 2400m at Santa Anita, running his rivals off their legs.

It’s a family trait! Highland Reel is out of the Australian bred and raced mare, Hveger, whose racing career included a second in the Group Two South Australian Oaks and a third in the Group One Australasian Oaks, and is a sister to Champion, Elvstroem, and a half to Champion Australian 3YO Colt, Haradasun.

Coolmore Australia was pleased with the results at Santa Anita, to say the very least: “The Breeders’ Cup is the pinnacle of the racing season in the US and it was great to see wins for Obviously and Highland Reel,” Coolmore Australia’s Paddy Oman points out.

“Obviously has been a stalwart for Choisir in the US for many years and he’s now won nine stakes races including three Group Ones and over US$2m in prizemoney.

“It’s a very appropriate time for him to be endearing the quality of Australian stallions to the US market as we have Vancouver travelling to our US base at Ashford for the 2017 northern hemisphere season.

“Choisir is having as good a year as he’s ever had in terms of racecourse results and stallions capable of producing quality runners with the regularity that he does are few and far between.

“As for Highland Reel, well he’s another example of a triumph for Australian breeding in the US with his impressive win in the Breeders’ Cup Turf. Highland Reel has now won the equivalent of over $8m in prizemoney around the world and his full brother, Idaho, appears to be a high-class prospect having run a number of Group One placings this year.

“Looking further down the track, it’s exciting to imagine what the progeny of Atlantic Jewel, Sea Siren, Nechita and Melito might achieve now that they have been mated to Galileo for a number of seasons. Hveger sets a very high standard for them to try and follow!”